By Jaymie DeGaetano for ShermansTravel 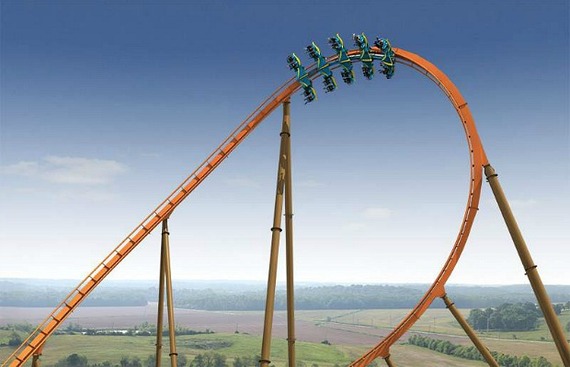 Along with April showers, May flowers, and non-bone-chilling temperatures, spring brings exciting new attractions to many amusement parks in the U.S. From a dizzying glow-in-the-dark funhouse roller coaster, to a beyond-vertical Batman, here are six new rides we're looking forward to in 2015.

Best Steel-on-Wood Hybrid: Twisted Colossus at Six Flags Magic Mountain (California): The iconic Colossus, a behemoth wooden roller coaster, takes on a new steel track when it reopens as Twisted Colossus. Patrons will recognize the ride's classic, white wood structure, but don't expect the same old up-and-down circuit. Two trains will race each other on dueling tracks that twist around one another through multiple flips.

Most Dizzying: Laff Trakk at Hershey Park (Pennsylvania): A throwback to the park's funhouses of yesteryear, Hershey Park will debut the first "indoor, spinning, glow-coaster" in the United States. Laff Trakk's four-person cars spin horizontally along a curvy track, whizzing by neon characters and a hall of mirrors, set to the soundtrack of a cackling clown. Good luck stomaching this one.

The Year's Highest: Fury 325 at Carowinds (North Carolina): The world's tallest, fastest "giga" coaster -- giga meaning taller than 300 feet -- comes to Carowinds this spring. Riders will experience plentiful "air time," a zero-gravity sensation created when the train caresses the peak of each hill, throughout the whopping 6,602-foot long course.

Quickest Launch: Thunderbird at Holiday World (Indiana): Fun fact: Holiday World is located in the town of Santa Claus. Thrilling fact: its new roller coaster, Thunderbird, will be the first winged coaster in the world to start with a launch instead of a chainlift hill. In 3.5 seconds, the ride blasts to a top speed of 60-miles-per-hour, sending riders through four inversions. The unique trains, which have seats positioned on wings, provide unobstructed views.

Most Disorienting: Batman the Ride at Six Flags Fiesta Texas: Although its name is unoriginal (there are eight other Six Flags roller coasters named "Batman the Ride"), the newest Batman will provide a truly one-of-a-kind experience. Riders sit to either side of the steel track in seats that flip freely upside down with the flow of gravity. Plus, Batman boasts two beyond-vertical drops; think of an 180-degree, U-shaped curve flipped on its side.

Best Bet for Family Fun: Voyage to the Iron Reef at Knott's Berry Farm (California): Take on virtual, aquatic robots aboard this new "4D Dark Ride." This interactive video game, which is also part roller coaster, provides a unique experience every time. The course of the ride depends on how many evil sea monsters you zap using laser guns. We expect this one to be a big hit with the kids and the kids at heart.