If anyone has ever told you that you're stuck with your slow metabolism -- they're wrong. Simply choosing this color fruit, for example, can help you lose weight now. Take your calorie-burning potential to the next level with these six surprising metabolism hacks: 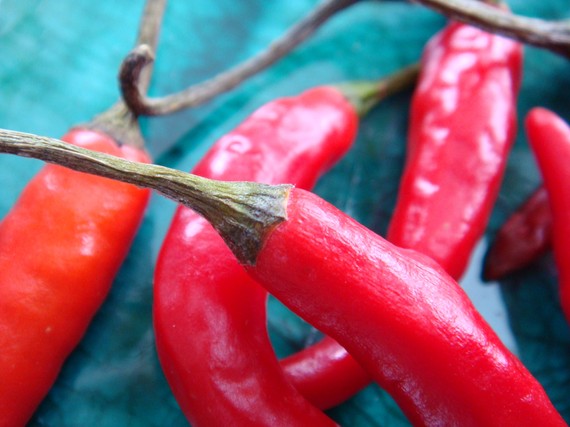 1. Get your giggle on
It's no joke: genuine laughter may cause a 10- to 20-percent increase in basal energy expenditure and resting heart-rate, according to a study published in the International Journal of Obesity. That means a 10- to 15-minute giggle fest could burn up 40 to 170 calories. Let me hear you lol!

2. Cool it in the bedroom
A striking new study published in the journal Diabetes suggests that simply turning on the AC may subtly transform a person's stores of brown fat -- "good" fat, stimulated by cold temperatures, that serves to keep us warm by burning through "bad" fat stores. Participants spent a few weeks sleeping in bedrooms with varying temperatures: a neutral 75 degrees, a cool 66 degrees, and a balmy 81 degrees. After four weeks of sleeping at 66 degrees, the men had almost doubled their volumes of brown fat. Cool!

3. Pile on the mild peppers
It's well reported that fiery capsaicin (think: hot sauce, cayenne, chilies) can rev up the metabolism, but study findings presented at the Experimental Biology meeting in Anaheim, California, showed similar weight loss potential in dihydrocapsiate (DCT), the non-spicy cousin of hot peppers. Participants who ate the most DCT experienced a metabolic boost that was nearly double the placebo group! Bottom line: pile on the poblanos! And learn more about the best spices for weight loss here.

4. Drink more water
Weight loss doesn't get easier than this: Simply drinking more water may increase the rate at which healthy people burn calories, according to a study in The Journal of Clinical Endocrinology and Metabolism. After drinking approximately 17 ounces of water (about two tall glasses), participants' metabolic rates increased by 30 percent. The researchers estimate that increasing water intake by 1.5 liters a day (about 6 cups) would burn an extra 17,400 calories over the course of the year -- a weight loss of approximately 5 pounds! (Speaking of drinks, avoid the diet soda. Find out how it only makes you fatter.)

5. Just add mustard
Add mustard to your meal, and feel the burn -- literally! Scientists at England's Oxford Polytechnic Institute found that by eating 1 tsp of mustard (about 5 calories) can boost the metabolism by up to 25 percent for several hours after eating. The benefits, researchers say, may be attributed to capsaicin and allyl isothiocyanates, phytochemicals that give the mustard its characteristic flavor.

6. Get moving for 2.5 minutes
Forget slogging on the treadmill for hours, research printed in the journal Physiological Reports showed that people who did five 30-second bursts of max-effort cycling, followed by four minutes of rest, burned 200 extra calories that day. That's just 2.5 minutes of work for a resting metabolism boost that will last 24 to 48 hours!

So indulge! Or better yet, make some amazingly delicious, but somehow nutritious, blueberry pancakes, from our brand new e-book "Cook This, Not That: Greatest Weight Loss Recipes," ready now for download, right to your phone or desktop!

LEARN THE SECRETS! For the latest food swaps and weight-loss tips, visit the all-new Eat This, Not That! and sign up for our free newsletter now.