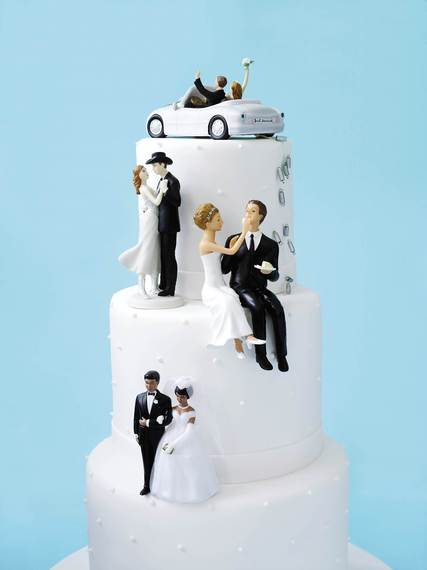 If a stranger crashes your wedding, you might not notice until you go through pictures later, but if someone crashes your actual wedding night? Well, it's kind of hard to miss. From the drunk friend that barged in to the kid that pulled the fire alarm at the hotel the bride and groom were staying at, these true stories will make you want to keep your wedding night whereabouts hush, hush!

"After the after party, my brother-in-law came back to our suite to hang out for what we assumed would be just a few minutes but it turned into literally hours! He was so obliterated and kept asking for group hugs between the three of us, which was super awkward and really out of character since we've maybe hugged a handful of times in the past six years. We tried to get him to go, however he proclaimed he was too drunk and needed to pass out here, in the honeymoon suite. My poor husband had to pretty much drag him back to his hotel room." -- Morgan

"It was 2 a.m. and we were about to head back to our hotel room after after-partying with all of our friends. Several of us were eating late night food in the park across the street before turning in for the night. As we were saying our goodbyes, one of my friends seriously suggested continuing the party in our room and was shocked when everyone else reacted shocked that she would even ask that. She tried to explain herself by telling us that it was like any other night, basically implying that wedding night sex isn't anything special. Needless to say, we didn't have a powwow in our room that night and the next day she had the gall to ask what we did and if the sex was all that that different. Our other friends still love to tell this story today." -- Kiley

"Some kid pulled the fire alarm at our hotel while we were in the middle of having sex! We were forced to put on clothes and evacuate, and we probably stood outside for an hour in the cold, if not longer, waiting for everything to be clear to go back inside. Fortunately, we picked back up right where we left off and there was no real fire, but boy was that annoying!" -- Jamie

"My maid of honor kept drunk dialing me over and over and made me let her in the room. She wanted to gossip about the best man stealing her leftover piece of cake and told me she needed help unzipping her dress. I unzipped the dress, offered my condolences regarding the cake, and sent her on her way! I did all this donning a towel because I had been in the middle of taking a bath so I wasn't super sweaty and gross for my husband." -- Krista

"We got married at a bed & breakfast, where the entire wedding party was staying, including us. While my husband was helping me out of my dress, one of my sisters walked in. All of the bridesmaids had gotten ready in my room earlier so she was trying to grab something she'd forgotten in there. It was an accident of course, and you could tell she felt super awkward about it. She left as quickly as she could and couldn't stop profusely apologizing. We laugh about it now." -- Lauren

"My mother-in-law called my husband's phone at 3:30 am repeatedly until he finally picked up. Turns out, she was drunk and needed help finding her niece who still hadn't returned to the hotel room. It completely ruined the mood. We both had to get up to try to track down his cousin, which we did. She was passed out in a different room. Ugh!" -- Desiree