Doctor Who is coming back in less than a week! In anticipation of the new season (and a new Doctor), my wife and I have been re-watching all of our favorite past episodes. One thing we keep noticing is that Doctor Who and parenting have a lot in common. Both can be simultaneously wonderful and terrifying. Both can be difficult to understand and yet remarkably satisfying when things click into place. There have been times after a particularly good Doctor Who episode when I have been struck with such a sense of catharsis that I've closed my eyes and wished I could watch it again for the first time. I can't tell you how often that has happened with my kids. There are some days that I wish I could repeat over and over and over again... and yes, there are days I wish I could skip. If only I had a time machine...

Here are six lessons that Doctor Who has taught me about being a dad.

"Oh man? Is that actually the sound they make all the time?" That was my first impression of a Dalek. I'm fairly sure others have had that exact thought about my kids. The answer is yes, she makes that noise pretty much all the time -- especially if you ask her to stop. But, much like the Daleks, even though my children are short, stubby screeching creatures hell-bent on the destruction of the universe, given enough time they actually become strangely cute and endearing. We used to dread the Daleks; now we can't wait for the episodes that feature them. My wife even has her own little Dalek on her desk at work, right next to a picture of our kids! 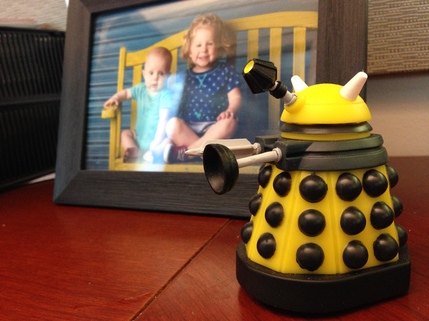 Upon first glance, the Weeping Angels aren't very scary, but turn your back on them, close your eyes for a single moment (even to blink), and everything goes to hell. Sometimes I blink. And sometimes my living room is suddenly awash in Cheerios. Or an entire roll of toilet paper has been unrolled into the toilet. Or my son has determined that the couch had chapped lips and decided to help it out by smearing an entire tube of Chapstick on it. Sure, not as bad as having your potential life energy consumed... but still pretty bad. 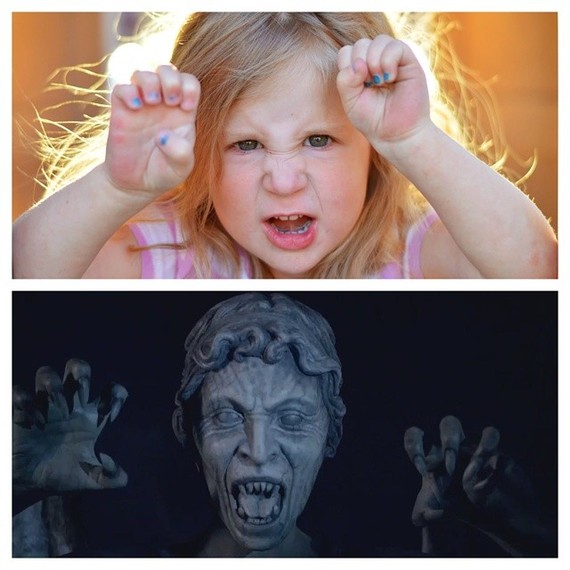 3. Most things can be fixed with a magic screwdriver.

I am sure that somewhere out there in the vast netherworld of the Internet there is an explanation of how a sonic screwdriver actually works, but let's be honest -- thematically, it is a magic wand. Most of the time, the Doctor just waves it around, it makes whistling noises, and he improvises. I may not have an actual sonic screwdriver, but I know all about the magic of parental improvisation. I have a spatula that is a spider-banishing wand. I have a cardboard tube that lets you talk to imaginary friends on the other side of the universe. And I have a spoon I keep in the freezer for bumps and bruises that can fix just about anything. The key is believing in it. If I believe, so will my kids. Maybe that's how a sonic screwdriver works. (I'm sure someone will correct me in the comments.)

Lesson #1: The Doctor lies. He's not malicious about it. Some truths have consequences. The Doctor does his best to think about those consequences and distribute enough truth to mitigate any bad outcomes. Does this always work? No, of course not -- but he does his best. I'm not always 100 percent honest with my kids either. I dole certain truths out in palatable doses. We play the Santa game. Death is still a pretty abstract concept. My daughter may or may not think I can lift a car over my head and jump into space. Also, she may think I am Batman. And monsters eat kids who don't brush their teeth. OK... maybe I shouldn't lie so much. 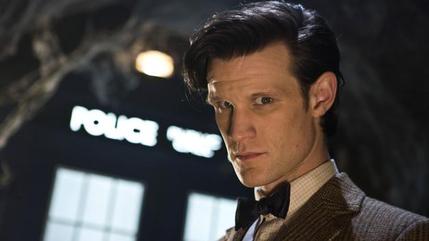 5. Parents can regenerate, too.

Every once in a while the Doctor dies -- almost. His death is generally preceded by an epic battle resulting in a monumental moment of selflessness and self-sacrifice in a successful campaign to save the universe. Then, golden light shoots out in every direction and the Doctor regenerates with a new face, a new personality, a little older (his mind, not necessarily his body) and a little wiser.

I have to admit, there have been a few times over the last four years when I have felt like I was at the end of my rope. Money has been tight. The world feels too big. I start feeling overwhelmed. The pressure reaches its peak, responsibilities come tumbling in and I go to bed a failure. Then something amazing happens. I wake up the next day. I walk into my kids' room, pick them up and hug them. I wrap my arms around their tired and quiet frames, bury my face in their hair and recommit myself to the lives that I helped make. There are no rays of golden light, and I haven't saved the universe through self-sacrifice, but I am reborn all the same -- always a little older and hopefully a little wiser.

In some ways, the TARDIS is my favorite character on Doctor Who. It's not just a blue box. It is a living, sentient being. It is the heart of the show. It travels in time with the Doctor. Often, it guides him where he needs to go, and it is much, much bigger on the inside. 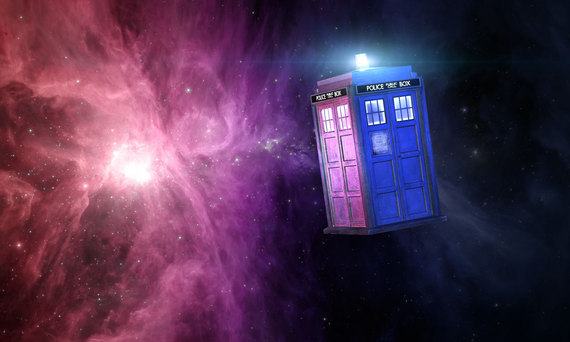 When we found out we were going to have a second child, my first worry wasn't about how we were going to pay for day care. It wasn't about having double the mess and double the laundry. My biggest worry about having two kids was finding the space in my heart for more love. I already felt so full. I thought to myself, "I have never loved anyone or anything the way I love my daughter. What if this is it? What if I have reached maximum output?"

Of course, I was wrong. Love is not a finite resource. It is infinitely replenishable, and my capacity to feel it and share it with others is much bigger than I had ever imagined. Just like the TARDIS, I am bigger on the inside. And just like the TARDIS, the real magic isn't only that I'm bigger on the inside; it's the realization that having a bigger inside helps me love so much more of what is outside. The TARDIS opens up space and time for the Doctor. My love for my family makes me feel the same way: powerful, humble and responsible for so very much.