The argument against tipping is often, "Hey, you don't need to tip. He's just doing his job!" But since you're reading this, you're probably not a jerk. Just because someone gets paid to do a job doesn't mean it's not a nice thing to give them a little extra -- especially if their jobs are tough and they've shown they deserve it by not stealing all your electronics.

Here are some people you don't tip, but probably should. To save you the anxiety when it's time to hand over the money, we even talked to people in each industry to see how much you should give 'em.

More: 11 Dishes You Should Be Able to Make By the Time You Hit 30 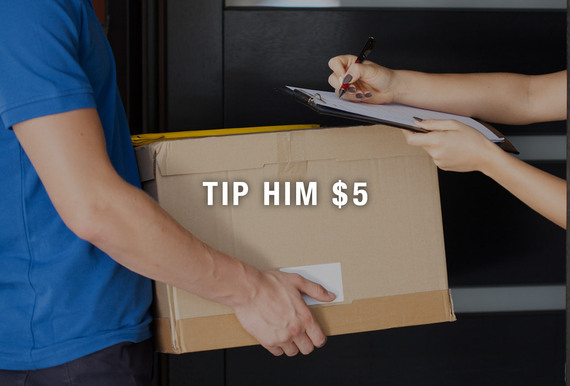 FedEx guy delivering a huge package
FedEx employees have great jobs! They have a salary and benefits, and everything! And salaried employees like that shouldn't get tipped, right? Well, like the diaper brand you're going to be buying for yourself in 40 years, it depends. For most packages, no. But I've definitely had huge, heavy boxes shipped to me via FedEx that were carried up four flights by a heroic delivery person. In the summer, they deserve even more.
So, how much? $5-$10. It's enough to buy a beer and some Icy Hot at the end of the day.

Parking lot worker at home improvement store
People buy big boxes from big-box stores -- boxes holding stuff like air conditioners, minifridges, and other modern cooling devices. So when the people working the lot at The Home Depot or Lowe's load something like a 60lb lawnmower in your truck, they deserve a few bucks.
So, how much? They average about $10 an hour, so with a $10 tip, you might just make their day. And when's the last time you made someone's day? Other than your mom the one time a year you remember to call her.

The Enterprise employee who picks you up in a rental car
When a cab driver drives me 40ft, I tip them $1. When a bartender cracks open my beer, that's at least a buck. So when an Enterprise agent/former NCAA athlete (if the commercials are to be believed) picks me up at my hotel, or friend's house, or wherever, and drives me to Enterprise for 10-15 minutes, that person deserves some cash. There are specials at Enterprise where you can rent a car for a weekend for only $10 a day, so another few bucks isn't going to break the bank. Based on the Enterprise employees we spoke to, they receive tips so rarely that you'll likely get a surprised, happy driver out of the deal.
So, how much? $1-$5 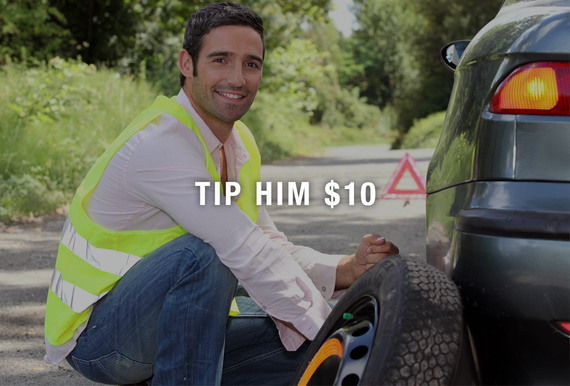 AAA guy fixing your flat tire
Sure, you pay a yearly membership for AAA, so you feel like you already paid the guy fixing your flat! But, based on my research, AAA pays a local tow company to come and tow your car. AAA doesn't care if you tip, because they subcontract out the job, and they're getting their cut either way. They're paying the driver -- but not much after taxes and fees.
So, how much? I talked to a local tow company, which said $5-$10 is much appreciated. Sounds like the least you can give to have someone bust their butt for you on the side of a highway at 2 a.m.

Karaoke DJ
What the hell does that karaoke guy do anyway? They just key in the song into the computer and kick people off when they've sung enough, right? Wrong. They deserve to be tipped solely on the basis that they've had to listen to inebriated women cry-sing Adele's "Someone Like You" for the last few years. And that is a fate I would not wish on my worst enemy (you know what you did, Tyler).
So, how much? A karaoke bartender I spoke to said you should tip based on how much fun you had, and that $10-$20 will do the trick at the end of the night.

Your apartment super
Your sink is clogged with hair. Again. Get a haircut, hippie. Instead of spending $10 on a bottle of Drano, you can save money by getting your super to stop by and snake the drain, and then tip them. If something goes horribly wrong around your apartment, no matter the time of day, the super will fix what needs to be fixed. They're basically ER doctors that make house calls. And an incredible service like that deserves a tip. Especially if you drag them out of bed.
So, how much? $5-$10 per job

But wait! There are still 5 more people you should be tipping. Find out who they are, at Thrillist.com!

17 Conversations Single People Over 30 Are Sick of Having