Adults, teenagers, and kids alike are going nuts over the Pokémon Go App, but there have been some safety glitches that the developers of the game, Niantic, Inc., probably should have anticipated. Players are getting robbed, seriously injuring themselves, and even being fatally shot for trespassing on private property, all because they "gotta catch them all."

For concerned parents, the viral game is especially stressful--while the app is effective at getting kids off the couch and outside, it's also become a huge safety hazard. Here are 6 essential tips to keep kids (and kids at heart) safe while hunting Pikachu.

1. Scope Out Poke Stop's or Gym's Before You Go

While all Poke Stops and Gyms are located in public places, it's still a good idea to do some research on the area you'll be visiting before you make your way. Some are bound to be safer than others, and by doing a simple Google search, you could avoid ending up in an unsafe area. This is especially important if you are playing Pokémon Go when traveling, where you don't have as good of a read on the neighborhood.

2. Parents Should Accompany Children, When Possible
Your child might not be too enthusiastic about being escorted, but it's best if parents accompany their younger children the first time they visit a Poke Stop or Gym to make sure it's a safe environment. For older kids, set up a pre-determined check-in time so you know they arrived safely and are enjoying themselves in a secure location.

3. Players Should Remain Aware of Their Surroundings
It's easy to get distracted while playing Pokémon Go, so make sure you check in with your surroundings regularly and stay aware of where you are in the real world. While bumping into a tree or stepping in a puddle might be harmless, the game has been known to have glitches that accidentally place Pokémon in the middle of streets and other dangerous locations. A player even recently stumbled upon a dead body while engrossed in the game.

Also remain aware of those around you. Many of the people you encounter will also be playing Pokémon Go, which can be a fun way to meet new friends! However, there are still people out there who want to harm or scare you, so don't get so distracted by catching Pokémon that you don't notice telltale signs that someone nearby is looking for trouble.

4. Be Respectful of Private Property
If you see a Pokémon in someone's yard or private area, DO NOT seek it out without permission, no matter how rare it might be! Trespassing on private property is against the law, and there has already been one extremely sad case of a teenage boy being shot and killed while attempting to catch Pokémon on private property in North Carolina.

5. If You're Going Out at Night, Be Extremely Careful
Avoid going to your favorite Poke Stop or Gym after dark--even if it is safe during the day, robbers or other criminals might be present at night. Armed robberies have recently been reported in Missouri, Maryland, and California, and the trend is unlikely to stop until players wise up and stop putting themselves in compromising positions.

If the temptation to seek Pokémon at night is too strong to resist, try to adventure with a group of players instead of going by yourself or, at the very least, let a friend or relative know where you are going and when you plan to return.

6. Parents Should Download the App
Even if games are not your favorite past-time, it's worthwhile to download the Pokémon Go App for a day to familiarize yourself. By studying the structure of the game and how it is played, you'll be better prepared for the potential safety risks players might encounter. Who knows...you just might enjoy it and want to keep playing!

While Pokémon Go is obviously a huge hit across all age groups, it carries with it a very particular set of safety risks. If players are smart, stay aware of their surroundings, and avoid getting into risky situations, there's no reason why this creative game can't be just as safe as it is fun. 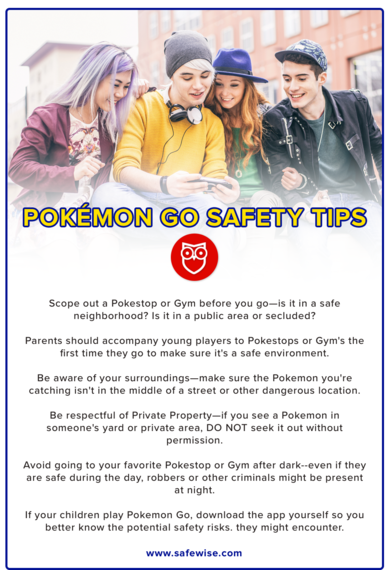 This article originally appeared on www.SafeWise.com.

More:
child safetypokemon goParentspokemonsafety
Newsletter Sign Up
Raise the kind of person you'd like to know
Subscribe to our parenting newsletter.
Successfully Subscribed!
Realness delivered to your inbox