During the last 13 years of my existence I have been inspired by the discoveries I have made about life, death and synchronicity as a result of the challenges presented by my 18-year-old daughter's Jeannine's death due to cancer. I also draw inspiration from the stories of others who are negotiating life challenges due to catastrophic loss. Their willingness to be present with me during their most vulnerable times is from my perspective, their ultimate gift to me.

My Four-Legged Caregiver and Guardian

I have also discovered that inspiration can come in all different kinds of packages; all different sizes and shapes. I am the proud owner of four cats, all of whom display different characteristics and traits. Every one of them has revealed valuable teachings that have facilitated increased awareness of myself and the world around me. My oldest cat is Bootsy, who in approximately six weeks will start his 19th year of life. This picture of Bootsy was taken in November of 2013. 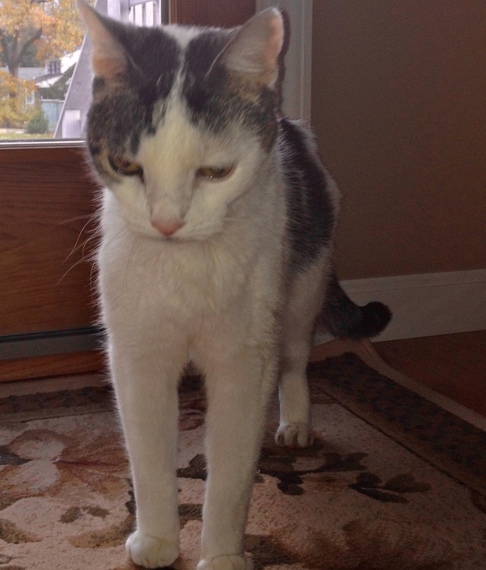 Bootsy was a Christmas gift to my daughter Jeannine from her best friend, and was a major comfort to me after Jeannine's death. He slept with me , woke me up and got me moving every morning. Bootsy was also my shadow and protector, following me everywhere I went in our house. In essence, he appointed himself as my personal caregiver and guardian. During a particularly bad day when my daughter was foremost in my thoughts, he climbed up on our couch, walked behind me and kissed (not licked) me right on the head. I truly sensed Jeannine's presence in that moment.

During the last three years of his life, Bootsy has experienced numerous physical challenges due to the process of aging. He is blind in his left eye, has some arthritis and experiences occasional balance issues. He has had difficulty gaining weight even though he has been on a steroid regimen and a diet of both canned and dry food. Bootsy is by nature a small cat; his highest recorded weight was twelve pounds. My wife Cheri and I told our veterinarian that we wanted to avoid intrusive tests or procedures and simply try to ensure that he had the best quality of life for as long as possible. Today he is only 6 pounds but is still eating and drinking and is engaged with his environment. Our veterinarian gave Bootsy a prognosis of one year of life approximately two years ago. The strength of his spirit transcends both his chronological age and physical frailty.

During the final chapter his life, Bootsy has chosen me to be his caregiver and guardian. It is now my job to make sure he eats and to prevent my younger cat Zoey from taking his food. As his caregiver, I also offer my presence by sitting with him and letting him curl up with me in the fetal position on our couch. In the 13th year after the death of my daughter, Bootsy's roles and mine have reversed. Bootsy took care of me after my daughter died; it is now my turn to take care of him.

Gary Zukav in his book, The Seat of the Soul, writes that:

"Karma is not a moral dynamic. The universe does not judge. The law of karma governs the balancing of energy within our system of morality and within those of our neighbors. It serves humanity as a Universal teacher of responsibility."

I have often asked myself about the factors that contributed to the evolution of my relationship with Bootsy. Certainly karma as Zukav defines it was one explanation. What Bootsy provided for me in the aftermath of my daughter's death, I am providing for him now. Because of circumstances in our life we became responsible to and for each other's well being. This is our contract.

Bootsy has also helped me address my perception that I was an inadequate caregiver for my daughter during her illness. My self-perception was based on my lack of proficiency doing the day-to-day physical tasks to make Jeannine more comfortable. Bootsy has taught me that there are many levels to caregiving. Among those are compassionate presence, companionship and love. My current role with Bootsy has also helped me to understand that presence, companionship and love was what I offered to Jeannine. That knowledge has helped me embrace a peaceful perspective about my relationship with Jeannine during her illness.

I have also asked myself why Bootsy remains tethered to the physical world. Perhaps we have more to teach each other. Perhaps he is simply content to be a part of my world for a little while longer. Bootsy has lived a good, long life and has been wise teacher and friend. From my perception, he has earned his admission to Rainbow Bridge.

Though I expect that I will experience sadness and yearning for his physical presence for some time after his physical death, there will be joy knowing that he will be reunited with another of my greatest teachers, my daughter Jeannine.

"Until one has loved an animal, a part of one's soul remains unawakened. " -- Anatole France

GPS For The Soul KarmaGary Zukavrainbow bridge
Go To Homepage