There are some strong opinions and views out there when it comes to living together before marriage. There is the group who tends to think that moving in must happen before marriage in order to have a "practice run" so you know what you're committing to.

On the other hand, there's the group of people who think it's a bad idea and may believe in the "cohabitation effect," which basically states that couple who cohabit before marriage tend to be less satisfied in their marriages.

Now, I'm not really here to argue one or the other by any means, but I am here to encourage people to really think things through before making this decision. In my mind, what determines the relationship success doesn't merely come from the simple decision of moving in together or not. Rather, it comes from what the couple thinks about and openly communicates prior to making the decision.

Here are five questions you should be asking before moving in with your partner:

1. Why are we moving in together right now? Is it due to convenience and to save money on rent? Is it just because all of your friends are moving in with their partners? Or is it because it feels like your are truly both ready to take the relationship to the next level?

Frankly, doing it just to save some money each month or just because "everyone else is" isn't really a good and solid reason. Be sure that you are both ready for it. Be sure that your relationship is stable enough to handle the challenges that come up in living together.

Ultimately, trust your gut. If you feel like its being rushed for whatever reason, put it off. It's always better to take it slow and be sure of it then to move quickly and regret it later.

2. What is your view of marriage and your partner's view? Have you both talked about marriage and shared your thoughts on the subject with one another? If you haven't done this yet and you're thinking about living together, you better discuss it to make sure you're both on the same page.

That being said, even when you are living together already, I think it's important to discuss one another's thoughts on the subject for a "check in" to see where the two of you are at. I think this is important because one person may really be wanting to get married, but the other isn't up for it due to divorce history, beliefs the relationship dynamic or other reasons.

Having regular, open communication about it is going to be helpful in keeping one another's thoughts and feelings out in the open and avoid any hidden inner resentments getting built up.

3. What's your view and your partner's view on having children? Just as it's critically important to discuss one another's views on saying "I do," it's also important that both people share their thoughts on having children. Do you both want to have children, or do neither of you want children? Does one of you want children and the other doesn't? Are one or both of you kind of on the fence?

Regardless of where you are both at, be sure to discuss it regularly to check-in, because you may have one view or opinion the one day and then it changes a few weeks or months later. Talking about it often helps both people understand where the other is at.

4. Who is going to pay for what? When living together when not married, there's several things to consider how it the money situation will be split up: Who is sending in the check each month for rent? Who is in charge of utilities? Who is going to buy groceries and when? Who is paying for dinners when you go out to eat? Who is going to buy that extra piece of furniture that you're going to need?

When it comes to dividing out housework, I don't think there is one "one size fits all" method. I think what a lot of it boils down to is discussing each others views and opinions on how to organize the housework and create something that works equally well for both people.

6. What will happen if we break up? In a world where pre-nups are virtually expected in getting married now if a divorce ever happens, it is also important to have some kind of plan in place for what to do if the two of you breakup while living together. Who gets the TV? Who gets that new crockpot you both purchased?

Make sure that you both have a clear understanding as to whose stuff is what. Ideally, write it down. That way, there won't be any extra conflicts if that unfortunate event does happen.

Ultimately, remember: When it comes to moving in together, you both have to make a conscious choice to make it work. Be sure that you both think things through and openly discuss any issues. 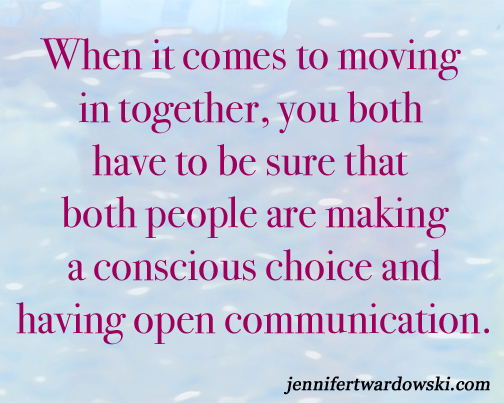 Click to Tweet: When moving in together, you have to be sure that both people are making a conscious choice and having open communication. via @jenilyn8705

In the comments below, share with me one thing that you think is important to discuss before moving in together.

Jennifer is a self and relationship coach and the founder of JenniferTwardowski.com. She helps women worldwide create fulfilling relationships with both themselves and others so they can live happy and joyful lives. Click here for her Free Self and Relationship Healing Meditation and weekly blog updates. To learn about how you can work with her, click here.