By Luke Darby for GQ. 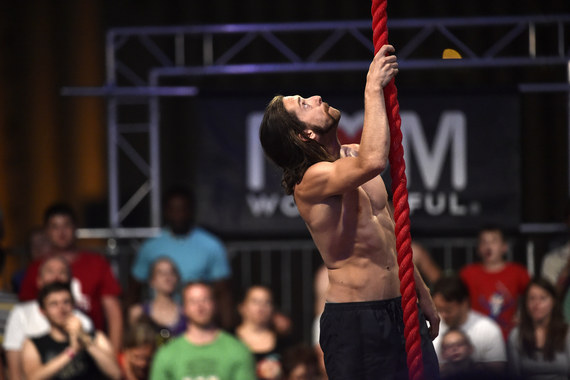 January is a month of food anxiety. It's not just about resolutions, it's the lingering sluggishness of vacation, the still-saturated feeling of holiday meals, and the haunting, family-inspired visions of what time and genetics have in store for your body if you aren't diligent. In the last six months, *GQ* has spoken to some of the world's top athletes about their diets, and a few trends have emerged. Better yet, the tips are easy to replicate for you -- the non super athlete -- at home.

Start your day with oatmeal
Oatmeal is as easy to make as a Pop-Tart, and it's one of the best ways to rev up for an active day. Isaac Caldiero, the first American Ninja Warrior champion pictured above, powered through his training for the show using oatmeal (well, oat bran, technically). "I cook up oat bran with almond milk, molasses, cinnamon, blueberries, and a tablespoon of chia seeds to thicken it," he says. "All the good morning nutrients you need and I could keep working without lunch." Similarly, rock-climber extraordinaire [Alex Honnold](http://www.gq.com/story/rock-climber-alex-honnold-vegetarian-diet) eats oat-heavy muesli before he scales cliffs. It keeps him full, longer.

Put everything in a smoothie
Eating is such a chore, right? You have to get all the things together, eat them one at a time, and just sit there not doing anything else. But smoothies and shakes let you mash all the key ingredients you need into one cup when you're on the go. Fencer-slash-model Miles Chamley-Watson loads up on protein-, fruit-, and nutrient-packed smoothies, and even professional eater Matt Stonie drinks protein shakes when he's recuperating from eating 20 pounds of curry in one sitting. A good blender helps.

Fish is the perfect, all-purpose protein
Salmon may top the shopping lists of most health-nuts (and ultramarathoner Dean Karnazes usually digs into it raw), but there are schools and schools of other scaly, healthy fat-laden varieties out there. Sumo champion Byambajav Ulambayar prefers fried mackerel, while tennis player and 2015 French Open winner Stan Wawrinka goes for sea bass.

Going vegan isn't nearly as hard as it used to be
Eliminating animal products has done a lot to improve the performance of both ultramarathoner Scott Jurek (an ultra-lean guy) and Chicago Bears defensive lineman David Carter (a really big guy), who consumes in the ballpark of 10,000 calories a day. (Going vegan has dramatically helped his tendonitis.) His secret, as a former meat lover? Cashew cheese.

Also in: *Temporarily* cutting out meat
Great athletes don't all eat alike, and not everyone is sold on the whole "no meat" thing. In the summer of 2015, James Lawrence ran 50 triathlons in 50 days, and he prepared for it by eating as much "normal" food as he could. And J.J. Redick of the LA Clippers goes for a grabbag, sporadically going full-vegetarian. "If I feel like I haven't had red meat in a while, I'll have a steak," says Redick. "If I eat too much of one thing, I'll cut it out for two weeks." Balance is key.

Just make sure you cheat
Statistically, you--yes, you--aren't going to stick to whatever your resolutions are. There are a lot of psychological reasons behind this, but even the highest performing athletes will tell you that discipline is hard. Like, *really hard*. As long as you're being healthy MOST OF THE TIME, it's okay and even beneficial in the long run to indulge sporadically. The best way to stay on track is to periodically let yourself wander off the track as a reward and find yourself in a Dunkin' Donuts. (Although Mohamed Elshorbagy is more likely to get Krispy Kreme while defending his title as one of the world's best squash players.) Even American soccer star DeAndre Yedlin will slack off of a rigorous diet just so he can right himself again. His jam? Chicken korma.