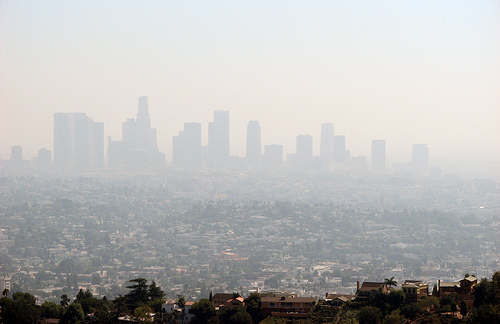 I recently had the displeasure of reading about some guy who decided to rant about the 5 reasons why San Francisco is the worst awesome city. Ugggghhhh. Why did you have to go there? Now look what you did... You started shit with out-of-staters who recently moved to California and feel like they are qualified to talk smack about places they barely know.

I know you wrote your post in jest, and I am trying to respond in the same way but am having a hard time keeping it Fox News (fair and balanced). So, take into consideration that I think the hardened spirit of Angelenos is impressive, and the people grinding it out day by day risking it all to make their dreams come true is totally awesome. To me, that is what puts the 'awesome' in "why L.A. is the worst awesome city."

Also, take into consideration that this is coming off the cuff... of my reasonably priced, thrifty, Buffalo Exchange oxford.

Los Angeles is the gang capital of the U.S.

I was one of 90,000 dropping it like it was hot to Dre and Snoop Dogg (for the kids out there, Snoop Lion) at Coachella this April. Trust me, I get the allure to the gangstas, it's weirdly sexy. There is a great hip-hop culture in L.A. But this shiz is fo realz playaz.

The city that was once ruled by the Bloods and the Crips is no more. (They phrase this like they miss the good ol days). 2007 estimates now "boast" that L.A. has over 1,000 gangs and over 88,000 members. Why don't I cite 2012 figures? I guess because the interwebz hasn't taken a gang census since then.

Los Angeles is also the unofficial pornography capital of America, and they don't want anybody stripping them of that tittle.

I feel some eye rolling and brow raising... what about the City of Free Love?

Sure, in S.F., a few people exercise their right to exercise right in front of you with their dong out on the street. I see it as a city that judges people by the content of their character and not the color of their dong. A big difference from a city that encourages movies to be made like: Transformers, the Unprotected Directors Cut.

Being overexposed to the sleaze rubs off on the population. Which brings me to...

Yes, S.F. has its share, but we try and confine ours to the bars in the Marina, the restaurants in the Mission, the boutiques in Pac Heights, the Haight Ashbury intersection... OK, whatever, but by day, our d-bags are rather likeable. I mean, how can you not smile at the suited up, overly moussed brah walking the line between lawyer and hipster? The skinny pants, indoor Ray Ban rocking arteest at Philz Coffee? The yummy mummy? The confused gutter punks? They certainly mean no harm and, for the most part, are productive, upstanding citizens.

Can you say the same about your d-bags?

Ever hear, "what do you do," prior to the handshake? "Who do you know?"... (do you mean in the whole world, or more locally?)... How about getting caught up listening to the gal who wrote Sisterhood of the Traveling Pants, but had it stolen from her? Bump into somebody with their shirt off... inside the bar? Have that same guy punch you in the face because you bumped into him?

It's a whole different level.

People often talk about L.A. being dirty and that is because it is.

I climbed Runyon Canyon crimping on Chick-fil-A bags. People bury their Tecate cans in the sand at Santa Monica. You think compost is a blog page.

And that's just your litter.

Ever hear of the Puente Hills Landfill? It's the world's largest dump, and it is in your backyard. It contains 130 million tons of garbage and stands 500 feet tall. If 'Garbage Mountain' was a high-rise it would be one of your largest skyscrapers... looming above the MGM Tower and the L.A. City Hall.

Its estimated by Dontwastela.org that by 2014 you will be making more trash than your city can handle. One of their findings is that your current system lacks basic recycling services. I know recycling is a new concept, but try and resist the temptation to throw that Dr. Pepper bottle away with your Styrofoam.

Oh, and you have pee and poo too. That's just big city living.

Maybe people move from San Francisco to L.A. because they really like audio books?

The TomTom congestion report, (seems legit, be glad I didn't cite the ZachZach) reports L.A. traffic as the worst in Northern America. That includes Canada folks, and we all know its congested as shit up there.

So, San Franciscans get a little rowdy sometimes and, arguably, get out of hand with their protesting. Once and awhile it delays MUNI or BART. That's when we walk places and take in the fresh, occasionally foggy, air.

Sure we have fog... but you have smog.

"Worst smog city in America." What does the American Lung Association think of that? "We think it's bad" (paraphrase).

Not to say that S.F. is without its sm_g problems...

We can be damn full of ourselves. We think our city is European, our parks are the prettiest, and our people are the most liberated and interesting. God knows, I call on only the craftiest of our local artisans to make my veggie sandwich.

But whatevs. Smog is worse than smug.

Zach is a fitness contributor for Huffpost... Despite a few shortcomings in all parts of CA, one of the best things about our state is the ability to get out of our cities and enjoy it! Follow him on Twitter for updates on Bay Area biking and climbing routes.