My husband just purchased an iPhone 6 Plus in anticipation of a long trip next month, and I'm pondering whether to get that version, or the slightly smaller iPhone 6. For the past couple of weeks, I've been writing down questions, and talking with my friendly local geniuses and not-quite-geniuses-but-smarter-about-devices-than-I-am, and they're helping me understand the best features of this much-lauded Apple device.

Especially if you're a frequent traveler, consider these six factors, emphasized by Apple developers as the main improvements in this newest, long-awaited upgrade: 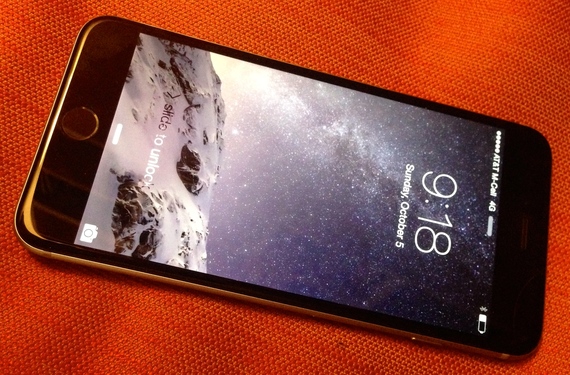 Larger Screen: The iPhone 6 and 6 Plus screens are 4.7 inches, and 5.5 inches, matching the screen sizes of rival smartphones. My husband opted for the Plus, mostly because he uses his device as an away-from-home office, and appreciates the biggest screen. The enlarged size took him a bit of getting used to handling, and the iPhone 6 Plus fits in his shirt pocket with just an edge showing, which doesn't bother him. My iPhone 5s now looks a bit chunky compared to the newer, slimmer versions (clever designers).

Durable Screen: New iPhone screens have "ion strengthened" glass, so breakage is less likely than before. This is different from waterproofing, which some rival smartphones claim. I once dropped my earlier model iPhone into a toilet and despite burying it in rice and chanting to the techie gods, it never revived. I was hoping I would never have to worry about drowning a phone again, especially when I'm traveling far from an Apple store. Maybe next iteration.

Improved Camera: Carrying a separate camera on trips is now unnecessary, except maybe for pros who need special lenses and the highest res possible. The new iPhones still have 8 megapixels, but we compared images on old and new smartphones and yes, photos are now noticeably sharper, with faster, more precise autofocus, and better sensors. Blurry photos from unsteady hand-holding, like when you're sticking out the car window to catch the moose crossing the road, are less of a problem because of greatly improved image stabilization. You now can also take a timed selfie, and shoot creative slow-motion video, wonderful for capturing moments you can share from your travels and for dog-and-pony presentations. Fabulous improvements.

Travel-Related Features and Apps: The iO8s platform that comes with the iPhone 6 and 6 Plus (and can be upgraded on earlier models) means many apps have been updated, and are included on the smartphones. You can now go into messages, touch and hold the mic, and record an audio message, especially great when you want to reach family or business in different time zones. You can automatically arrange photo albums, and use many other new editing possibilities.

Other apps of note for travelers: Snapseed with innovative photo editing; Hipmunk, providing creative travel ideas and highlighting offbeat accommodations; iBooks, offering lots of freebies to read as you travel, in an attempt to overtake Kindle's popularity with Apple users; HomeKit, allowing you to control connected home security and smart-home devices through Siri, so you can make sure the garage door is closed and the aircon is set at 68 when you're in Kabul and your home is in Great Neck.

Longer Battery Life: Travelers count on batteries, especially if we're lost on a lonely road in Romania or need to cover a meeting. The geniuses claim that the iPhone 6 will last 25 percent longer on 3G browsing than the iPhone 5S, and that the iPhone 6 Plus will last even longer. Batteries aren't removable, so backup spares aren't possible, as they are in some rival phones. I don't like that part, and because the iPhone 6 Plus has a longer battery life, I'll probably choose it over the 6.

Mobile Wallets: iPhones 6 and 6 Plus (and the upcoming Apple Watch) are set for making contactless payments, and Apple Pay is now available in the United States, and maybe soon in other areas. Starting this month, you can securely store credit card information in the smartphone and use it as a credit card, using the iPhone's Touch ID fingerprint sensor at the few places this new system is accepted. Uber has already announced Apple Pay integration services. Others will follow, and it does seems a long-term terrific system, especially for travelers.