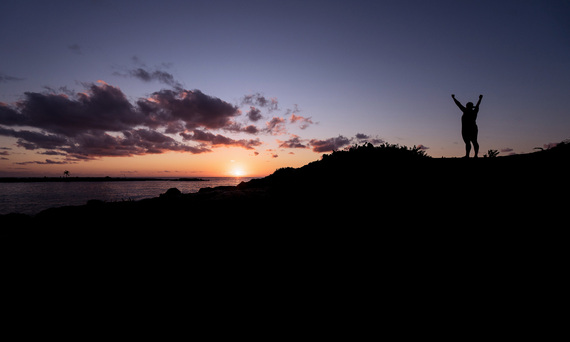 OK. Let's state the obvious facts:
Sure, Sessions as Attorney General will not make it easy, unneeded barriers will need to be hurdled, and some progress may be clawed back. But, in the spirit of Thanksgiving, let's take a look at the past and be thankful that we have come this far. Thankful that four more states legalized recreational marijuana -- bringing the number of states fully legal to eight (plus Washington, D.C.). Thankful that 29 states recognize that marijuana is medicine and provide access to patients in need.

"We need to remember something important among all the doom-and-gloom you see all over social media," says Daniel Yi, communications director for MedMen, a cannabis management and investment firm based in Los Angeles. "Jeff Sessions has not said anything yet about marijuana since the news of his nomination came out. President-elect Trump hasn't said anything yet. Everything is conjecture. In the meantime, the work in the industry goes on."

Here are six reasons not to freak out about Sessions:

Although the presidential race was tight, marijuana won a clear mandate on Election Day.
Nine states had a marijuana initiative on the ballot and eight of them were victorious
. Only Arizona failed, and that vote was close (47.8 percent voted yes).

"We believe we have passed the tipping point and the momentum is now close to irreversible," said Adam Bierman, CEO and co-founder of MedMen, a cannabis management and investment firm based in Los Angeles. "We have reached a critical mass, the federal government cannot ignore the impact of our industry, the will of more than half of the states and the majority of Americans.

In 2016 alone, lawmakers in 24 states approved more than 30 pieces of legislation specific to marijuana policy reform. So at the state level, things look solid. And the momentum is not likely to abate.

Neill Franklin, executive director of Law Enforcement Enforcement Against Prohibition, says the fight is just beginning. "This Thanksgiving, we're in a unique place as a nation, and while much remains uncertain, I know without a doubt that the challenges of the coming months and years will make us stronger," said Franklin, a retired major who had a distinguished 34-year law enforcement career with the Maryland State Police and Baltimore Police Department. "We won't rest on past successes. We will keep pushing ahead."

Really, people, why would the government want to throw away a robust economic engine pumping millions of dollars into public coffers from Maine to California?

Cowen and Company, a financial services research firm, released a study on Monday demonstrating "industry revenue growth in the current adult use states has been clearly robust." Colorado retail revenues have skyrocketed about 50 percent from last year, tracking at close to $1 billion in sales annually. In Washington, retail sales soared 100 percent.

Cowen's research projects that the marijuana retail industry will be worth about $50 billion in 10 years. That's Billion with a capital B. And Cowen says that is a conservative projection!

There is not a fiscal conservative in America that could look at those numbers and not see the light. And also consider the fact that drug cartels won't get those revenues.

"I'm hopeful that he's enough of a capitalist to at least see the economic benefits this has provided to the various states in addition to the social justice and medical benefits," Jeff Zucker of Green Lion Partners, a cannabis business strategy consultancy, told the Wall Street Journal.

The American People Have Spoken

Support for marijuana legalization has never been higher. Just a month ago, a Gallup Poll was released showing that 60 percent of Americans want the plant legal.

When Gallup first asked this question in 1969, only 12 percent of Americans supported the legalization of marijuana use. In the late 1970s, support rose to 28 percent but began to retreat in the 1980s during the era of the "Just Say No" to drugs campaign. Support stayed in the 25 percent range through 1995, but increased to 31 percent in 2000 and has continued climbing since then.

"It would be political suicide for the Trump Administration to go against a campaign promise on a hugely popular issue that won even among their demographic," Troy Dayton, CEO of the ArcView, a cannabis research firm, told NPR's All Things Considered this week.

And Tom Angell of Marijuana Majority says: "A clear majority of Americans support legalizing marijuana and super-majorities across party lines believe that states should be able to implement their own cannabis laws without federal interference. The truth is, marijuana reform is much more popular with voters than most politicians are, and officials in the new administration would do well to take a careful look at the polling data on this issue before deciding what to do."

The Executive Branch Can't Do It Alone

Even if Sessions and Trump want to revive the failed War on Drugs (which, again, is conjecture at this point), it would take a compliant Congress to go along. Do these politicians want to explain to their constituents at home why their vote in support of marijuana is null and void?

Plus, there is the bipartisan Rohrabacher-Farr Amendment which passed last December. The law prevent the DOJ and DEA from arresting or prosecuting patients, caregivers, and businesses that are acting in compliance with state medical marijuana laws. The amendment does nothing for states that have recreational laws, but it does help the 29 medical marijuana states.

Does Congress really want to pick this fight again?

Congressman Dana Rohrabacher of California, a prop-cannabis Republican who supported Trump during the campaign, and whose name is on the amendment, remains upbeat. "This president has made clear that he believes in a states' rights approach to marijuana," Rohrabacher said last week after the Sessions news was released. "And if the president is in favor of a states' rights approach to marijuana, I am certain that Jeff Sessions, being a man of high integrity, will not be undermining his president's position."

What About The Patients?

Cannabis is a medicine for veterans suffering from PTSD. And young children with severe epileptic conditions. And seniors with intractable pain. The list goes on and on. These can't be the people Sessions was referring to when he said "good people don't smoke marijuana." Even he can't be that cold-hearted.

"Well, Jeff Sessions hasn't met the cancer patients and AIDS patients and the children with epilepsy who are finding relief with cannabis," Dayton of ArcView said.

Marijuana has been maligned in the United States since the 1930s. It has taken generations and generations to get to the point we're at today. And there are a lot of people fighting hard to change hearts and minds.

"We have been fighting for a long time, and definitely one presidency is not going to stop what we are doing," said Steph Sherer, executive director and founder at Americans for Safe Access: "When given the choice between our health and breaking federal law, we are going to break federal law."

And Adam Bierman, Ceo and co-founder of MedMen, takes the long-term business view. "The marijuana industry didn't get here overnight, this has been 20 years in the making when California first passed medical marijuana. So this industry is here for the long haul. To build a company, let alone an entire industry, you cannot be reactive to the news of the day, you have to have a long term game plan."

So, this Thanksgiving, give thanks for where we are. And vow to keep fighting the good fight. Now, pass the mashed potatoes.
Download
Calling all HuffPost superfans!
Sign up for membership to become a founding member and help shape HuffPost's next chapter
Join HuffPost