By Laura Motta for ShermansTravel 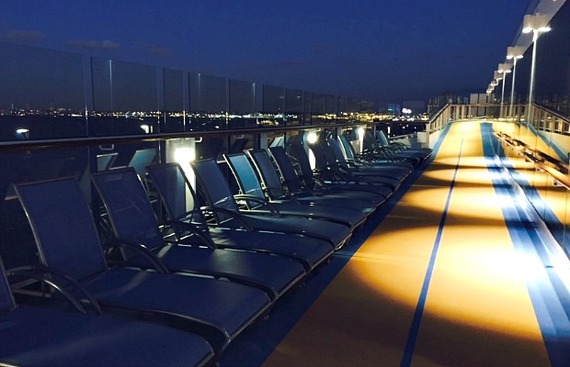 Every cruise ship has its quirks. Royal Caribbean's newest -- and third-largest -- vessel, the Quantum of the Seas, is no different. Here are a few tips and tricks that we learned onboard that will help you sail smoothly.

Use the North Star on at-sea days (or not).
One of the Quantum's many innovations is the North Star, a bubble-like pod on an arm that rises up to 300 feet above the ship. Imagine views of the Caribbean islands, or of cities when you sail into or out of port -- it's pretty incredible. Timing your trip on the North Star is important. If you actually want to see something aside from open ocean, expect a line. If you don't feel like waiting and just want to experience soaring high above the ship, this is exactly the time to climb aboard.

Going outside in the cold? Warm up first.
If you're sailing from Cape Liberty, New Jersey -- just outside of NYC -- to the Caribbean this winter or spring, you'll likely be sailing in cool, if not downright cold weather for at least part of your itinerary. Before you venture out onto the mostly wide-open deck 14, or stand in line (outside!) to get on the North Star, grab a coffee or a tea. There's plenty to be had at the Windjammer Marketplace, the ship's open dining room, so that you don't have to run all the way downstairs to the café.

Looking for the best food? Head straight to the pub.
We sampled most of the food offerings on board the Quantum, including some of the flagship restaurants in the ship's "Dynamic Dining" concept, and found our favorite in an unexpected place: the pub. Michael's Genuine Pub, with fare designed by chef Michael Schwartz, offered us everything we were craving -- and not quite expecting -- on a cruise ship: craft beers, polenta fries, deviled eggs, and homemade potato chips, just to name a few. Food is priced a la carte with items going for about $4 each.

The Broadway show onboard is the real thing.
When you see a Broadway musical on a cruise ship, it's often a much-abbreviated version of the show that has one act and clocks in at about 90 minutes. Scenes are deleted. Characters and story lines are cut. That's not the case on the Quantum of the Seas. In fact, the production of the ABBA musical Mamma Mia that we saw on the Quantum is, note for note and scene for scene, the exact same show that you'd see on Broadway in New York or in London. In fact, this version might be even better. Why? Because both of those big-city productions have been chugging along for years. This one is brand new. It has a newly rehearsed cast, a slew of freshly bedazzled costumes, and a full live orchestra. Plus, the seats on this version have cup holders for your wine. You definitely won't find that on Broadway.

The robot is cool -- but it's still a robot.
Besides the North Star, the most camera-ready amenity on the new Quantum of the Seas, a ship that touts itself as the most technologically advanced at sea, is the robot bartender at Bionic Bar. With automated arms that reach for bottles, add ice, and shake with precision, it's great fun just to watch it work. You should know, though, that while it can make some exceptionally fruity drinks -- perfect for all your Caribbean-cruising needs -- the basics are not its forte. In fact, it doesn't produce a basic gin or vodka tonic. If you're looking for a glass of wine, a whiskey on the rocks, or a Manhattan, you're better off at Schooner Bar, where you'll be served by a very human, and very gracious bartender.

Know where to find the 24-hour food.
With the focus on reserved, themed dining, the Quantum of the Seas isn't a great place to be hungry at an odd hour. Know, though, that there are some 24-hour options. The Grill at the Windjammer Café and the Café Promenade are both open continuously, and Michael's Genuine Pub reportedly stays open late. When we sailed, Sorrento's Pizza was open into the wee hours, too.