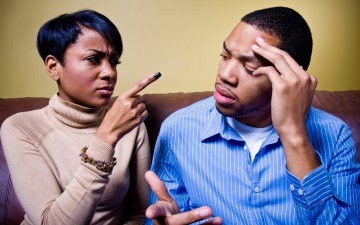 "A bad relationship will make you feel more alone than when you were single." --Unknown

Many of us have been conditioned to believe love is supposed to hurt. I'm not sure where that philosophy came from, but it's alive, well and heavily practiced in relationships all over the world. We stay with people who neglect us, take us for granted and mistreat us. We mask such actions as "growing pains" of the relationship and attribute them to being "just how love is."

But love is not pain; it isn't constant disappointment or abuse of any kind. Love is actually the exact opposite.

Every relationship has its ups and downs, and even the most well-put-together couples have their issues. But there's a very distinct difference between simply having a rough patch and being in an extremely poisonous relationship.

Here are six signs you're in a toxic union.

1. You're doing everything to keep the relationship going... alone.

It's normal to feel alone in your relationship. It isn't normal to actually be alone in your relationship. If you're feeling, thinking and acting like you're single, more often than not, you should be. If your significant other is becoming more distant, and has checked out of the relationship regardless of your pleas for closeness, then you're just about at the end of your rope. Most likely they are looking elsewhere for the comfort that you should be giving them, but have not yet pulled the plug on your union.

2. Your partner doesn't respect you.

Respect should be a given in any relationship, but in some cases it isn't. If you have to make excuses for how your mate talks to you, treats you in front of others, or interacts with other people, then it's time to reevaluate your relationship. Someone who truly loves you will not treat you like a doormat. You know when someone respects you. And when that's gone, so is the relationship.

Every couple fights, but is this your love language? If you're with someone who you cannot even properly communicate with, chances are you're in a toxic relationship. I'm not talking about the normal bickering that occurs between two people. I'm talking about words that will never be forgotten, spit from tongues pricklier than freshly sharpened pencils. If just about ever other word that comes out of your mouths is meant to tear each other down, you shouldn't be together. Your relationship should be your source of peace, not an audition for Snapped.

4. You avoid each other.

Toxic relationships have one thing in common: they always contain the element of avoidance. At the bare minimum, you should be able to be around your mate. Those in fulfilling, healthy relationships look forward to spending quality time with their significant other. Finding it difficult to be in the presence of your partner is a sure sign of trouble in paradise.

5. You don't feel comfortable being yourself.

If you live long enough, you'll realize that you have to fight pretty damn hard to remain the same. The one who you're meant to be with will love you for who you are, flaws and all. They'll provide a welcoming space for you to be you, because they'll recognize the importance of being genuine for the sake of your relationship. If you feel like you have to hold back on key traits of your personality, you might be in trouble.

When you reach the point of not giving a damn, it's simply time to go, because you have to care in order to fix things. There must be a minimum of damn given in order to get out of the dark places that your relationship will inevitable pass through. Not caring is a sign that you are no longer invested--in not just the relationship, but also your partner.

Love isn't bliss all of the time, but it certainly isn't constant pain, anger and disappointment. Don't confuse toxicity with the occasional drama that may arise due to loving another human being. By distinguishing the difference between a toxic relationship versus a healthy one, you're allowing yourself to experience love how it's meant to be experienced: fully, uninhibited, and freely.

Shantell E. Jamison is an editor for EBONY.com and JETmag.com. Not confined to chasing headlines, this Chicago-based writer, radio personality and cultural critic is also the author of Drive Yourself in the Right Direction: Simple Quotes on How to Achieve Your Best Self.