Is there anything more important to the success of a company than decision making? And is there any other process that occurs so often in a company that is accomplished so haphazardly?

The decisions that are made, from the boardroom and the corner office on down, dictate the direction that the company goes. Yet, decision making may be the only area of a company that doesn't have a clear structure or process for maximizing quality. Think about it. Sales, marketing, finance, and research and development all have formal procedures in place to ensure that their outputs are both effective and efficient. There is, however, rarely such processes in place to ensure uniformity in the quality of a company's decision making. And this absence can lead to some horrendous and potentially catastrophic decisions.

In my consulting work in the corporate world, I have found that business people have considerable confidence in their decision-making capabilities. I have also found that their confidence is often unjustified and sometimes based more in fantasy than reality. Research has also found that decision making is rife with cognitive biases that make objective and rational decisions incredibly difficult. Yet, little attention and time is devoted to creating a structure and process that will help develop that which facilitates good decision making and mitigates those factors that lead to poor decision making.

Like any system, decision making is most effective when it is structured and organized. A decision-making system provides companies with a consistent process that can be adhered to and, after decisions have been made, evaluated and adjusted for the quality of their outputs.

Through my work in the business world, I have developed what I call the Precision Decision model of decision making (see image below). 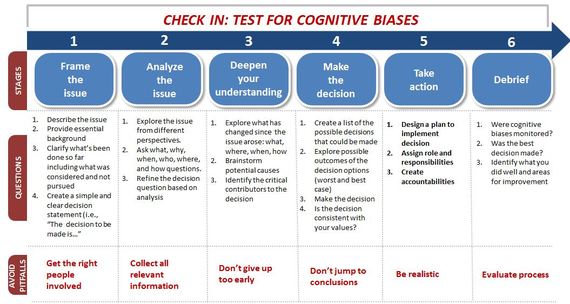 The Precision Decision model provides companies with a framework for quality decisions while allowing for flexibility in its implementation. My Precision Decision model is comprised of six stages that progressively guide you through the decision making process. Within the six stages are a series of specific questions and a key recommendation to avoid common pitfalls at the different points in the decision-making process.

This stage involves understanding with absolute clarity what the issue is and what type of decision is going to be made. Essential questions to ask include:

The best decisions most often come from a collaboration between people with the ideal combination of knowledge, skill sets, perspectives, and experience. A common pitfall in this initial stage of decision making is not getting the right people involved. You can avoid this trap by identifying the areas of expertise that need to be included and carefully selecting a group of people who can provide a broad and deep perspective on the presenting issue.

Once the issue has been clearly articulated and a decision statement has been created, it's now time to do an extensive analysis of the issue and really delve into its many facets. Key areas to examine include:

At this stage, one of the most common pitfalls is to assume that you have your arms fully wrapped around the issue and are ready to make the decision. The best way to mitigate this pitfall is to ensure that you are collecting all of the relevant information that will contribute to a quality decision. This can be accomplished by asking the decision team members to leverage their knowledge and experience to bring forward any information that they deem germane, however esoteric it may seem.

When your team feels that it has done a thorough analysis of the issue at hand and has a firm grasp of the decision that needs to be made, it's ready to do a "deep dive" and plumb the depths of the decision. Important issues to consider include:

A frequent pitfall in this stage is to give up too early when you think that you have a real understanding of the issue. My recommendation is to allow the issue and the potential decision germinate in the relevant stakeholders.

At some point, of course, a decision must be made. Here, where the rubber meets the road, is when you must take your broad and deep understanding of the issue and begin to identify possible decisions. Essential areas to consider include:

Jumping to conclusions is the most likely pitfall in this stage. As you filter through possible decisions, each can look very attractive and may cause you to choose one prematurely. It is best to commit to a thorough consideration of each decision option before you return to the one that you think is best.

This stage is the scariest because you must "put your money where your mouth is." It is also the point at which implementation of the idea becomes as important as the decision itself. As you likely know from experience, the best decisions can fail if they are not put into action effectively. As such, the following four steps will help ensure that the implementation maximizes the likelihood that the decision was, in fact, a good one.

A common pitfall in this stage is to be unrealistic in your expectations of the outcome of the decision. As with most things in business and life, decisions take time to take root and blossom. I suggest that you be patient and allow the decision to slowly reveal its worth.

This stage is often one that is overlooked by companies because they are just too busy pursuing the future to take the time to reflect back on the past. This "forensic analysis" provides an evaluation of both the process and outcome of the decision making. Key questions to ask include:

Not surprisingly, the greatest pitfall is to not evaluate the decision. The fundamental lessons from the debrief are to identify what worked in the decision-making process (and repeat it) and identify what didn't work (and jettison it). The result is that, with time and consistent adherence to the Precision Decision model, your company fine tunes and customizes the decision-making process until you have developed a system that works effectively with your unique culture and dynamics.

As I noted in a previous article, cognitive biases are bad for business. Yet, they are also ever present in the business world. An essential part of the Precision Decision model involves constantly checking in at each stage of the process to ensure that cognitive biases have a negligible effect on the decisions that are made.

And this conclusion can only mean good things for the future of your company.