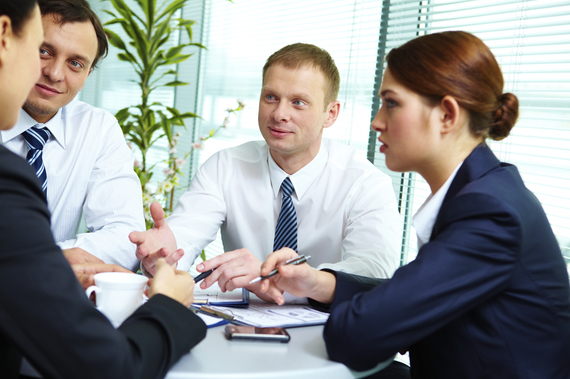 Anyone who has ever worked on a political campaign knows that this is a space unlike anything they have ever worked in before or will work in again. A campaign is often assembled in record time by a combination of people who have never worked on one before and/or are personally connected to the candidate as well as seasoned campaign staffers.

This can be (and often is) a recipe for communication disaster. Ultimately though it can provide the most fruitful training ground for anyone communicating anything.

Current campaign staffers -- Republican, Democrat or Independent -- may want to absorb certain lessons amidst the day-to-day capriciousness and take them along in their next steps.

The last political campaign I worked on was over twenty years ago and these lessons learned are serving me well (still) today in every space I enter.

This is how you take "Let it go" to a whole new level. The hits in campaigns are rough because they come from inside as well as outside the organization and they occur multiple times a day (ask a Jeb or Hillary staffer). If you take things personally in a campaign, you won't survive. When you learn to stay neutral and realize every breath you take is about the candidate, not you, you will be able to communicate more effectively. This practice helps with every position you hold in the future. Remember whom you serve, the greater good of the cause and focus your communication around that foundation.

The day after the election, everything will be different if you lose. Prepare to win up to the last minute and at the same time be ready for the emotional hit of the loss. Surround yourself with people who will provide support and listen and guide you as you decide on your next professional steps. When you forget to prepare for the loss, it takes longer to recover. In all interactions this practice helps us take in the defeat and be ready for the next "campaign."

The day after the election, everything will be different if you win. Winning does not always mean victory for everyone on the team. In fact, it's the time when people are jockeying for position; if you're not prepared to ask for what you want or you have not told the principals what your wish is, you will get lost in the shuffle of people who have. Plan to ask for something you've invested in and communicate what you want from the win to someone who can help you make it happen.

It really does pay to stay true to your nature and be good to others. The bonds made on campaigns last a lifetime. Decades later the pettiness that occurred during the campaign is forgotten and the status of winner and loser fades (because so many others have followed) and the good ones are sought out to advise, reminisce and continue a friendship.

5. Find the funny people and become their friends

Campaigns employ a cast of characters and some of these characters are funny! Uncovering these people and enjoying the banter of their humorous take on things will bring you joy during some of the darkest days. They will remind you to remember your humor when you communicate. They're a blast to connect with years later!

6. Build on the Network

Stay in touch with all the people you meet in a campaign. Communicate with them on LinkedIn, Facebook and other social media outlets. When possible, create outings with the whole crew, talk in person, share the old stories and rely on each other for new introductions and expand your network from there.

Jeanne M. Stafford is writing a book on Asperger's, improv and fearlessness. She trains her audiences and coaching clients to communicate powerfully using improv techniques. Sign up for her free 30 Days of YES and find out how using YES words can empower you to possibility. Follow Jeanne on twitter @jeannestafford and visit her website http://jeannemstafford.com