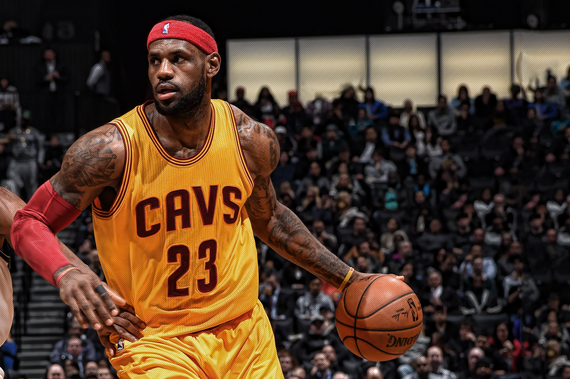 The name LeBron James is synonymous with the National Basketball Association, and with the sport of basketball in general.

The current front man of the Cleveland Cavaliers has an extensive and distinguished career under his belt, packed with championships, titles and several individual honors.

James is one of the greatest basketball talents the world has ever seen. After watching him on the court, it is evident that we can learn quite a bit about the game and the value of hard work from his consistently superb performances.

Most people can at least gain an appreciation for the beautiful game of basketball after witnessing a player of James' caliber effortlessly dribble around another team and ring in buckets of points. But the NBA superstar also offers lessons to entrepreneurs.

Here are six bits of wisdom entrepreneurs owners can learn from LeBron James.

1. Marketability
The story of James's rise to basketball stardom is well known. Already a sought-after NBA prospect in his high school years, he'd been breaking records and bagging athletic distinctions well before he set foot in an official NBA game.

What's critical about James's high school performance is the leverage it gave him going into the NBA draft and his rookie season.

James was the No. 1 draft pick because of his hard work and his ability to capitalize on his natural talent.

However, the point here isn't that he worked hard (although he did), but that he made himself desirable as a prospective player.

By surpassing expectations and earning praise in high school, James made himself marketable to professional teams looking for young talent.

Businesses can learn from James's pre-professional career that marketability and branding are the keys to long-term success.

2. Adaptability
Perhaps the most memorable stint of James's long career is his time with his home state's Cleveland Cavaliers (the first and the second time).

It's fair to say that his time with the flashier Miami Heat is equally memorable, but was more infamous than famous. Briefly ignoring his detractors, let's look at the move objectively.

Sure, LeBron may have left behind his teammates, fans and even his hometown in his journey to South Beach, but the move never diminished his ability to churn out excellent performances.

James's time with the Heat included two back-to-back championships, a testament to his adaptability.

Entrepreneurs can learn from James the value of adjusting their business approaches to different audiences, so that they can maintain success in marketing.

3. Tenacity
Despite all the hate he got for moving to Miami, the fact remains that switching teams showed a desire for success on James's part.

The consecutive championships he won in Florida were the result of James's refusal to pass up any chance he had to win a title.

Although he had had previous success with the Cavs, he seized the opportunity to move so that he could achieve greater success and further spread his image as a star basketball player.

In the same way, businesses and entrepreneurs can learn to take risks and be willing to pivot in order to spread awareness of their brand and ultimately become more successful.

4. Loyalty
Now that the criticisms of LeBron for his betrayal of Cleveland are over, we get to talk about the exciting part -- his return to the Cavs.

All was forgiven when James made his decision to return to his former team, his former fans and his hometown.

James's reappearance on the Cleveland roster was more than just a gesture of kindness to the people he'd left behind a few years earlier; he came back because it was the right thing to do.

As a native of Ohio, LeBron James was and is beloved on the Cavs' starting lineup. James was a homegrown idol for the native Cavs fans.

That's why his move to Miami was so widely disparaged, especially by his former biggest supporters.

Coming back to Cleveland not only restored the trust of the Cavs fans; it also demonstrated a deep loyalty between the player and his advocates.

Businesses can learn from James's actions that abandoning their earliest adopters in favor of bigger crowds may not always be the best for their image.

5. Consistency
Perhaps what is most impressive about James is his consistently high performances. As a rookie, and on the Cavs and Heat rosters, James has always set a high standard for himself and the other players on the court.

In his two terms with Cleveland and his time with Miami, he never became complacent. He continued to work hard through it all; three NBA championships and numerous individual and first-team honors are ample proof of this.

Entrepreneurs can learn from James the importance of continuously doing their best and never using current success as an excuse to stop delivering to their loyal audience.

6. Collaboration
We could analyze the nuances of LeBron's game for hours, but the final lesson we can glean doesn't come from what he does on the court; it comes from what he says off the court. Recently, James named Gregg Popovich the greatest NBA coach of all time.

Popovich is a man who has denied him two NBA championships, so it may come as a surprise that James praises him.

However, his applauding of the Spurs' coach in spite of previous rivalries shows great maturity on James's part. It also establishes LeBron James as an athlete who values the dedication NBA coaches so often bring to the game.

From James's respect for rival coaches, businesses can learn the power of collaboration.

"It would be pretty amazing to be able to actually play for the greatest NBA coach of all time," James told USA Today.

Popovich will replace Mike Krzyzewski as the coach of Team USA after these Olympics. For James, this will be an opportunity to be around another coaching legend.

And even the best know that they can always get better and learn. While we may not have access to Coach K directly -- today, you can read books and articles, or watch coaching videos from the world's best coaches at your fingertips.

So while everyone would expect LeBron James to be able to teach us a thing or two about basketball, who would have expected that he could teach us so much about business?