I married into a high caste family in the plains of Nepal, and gave birth to my son in a small hospital about 45 minutes from our village, a story I tell in While the Gods Were Sleeping: A Journey Through Love and Rebellion in Nepal (Seal Press, 2014). We lived in the village until my son was eight months old and returned at various times throughout his early childhood.

For generations, his father's family had been farmers. They produced their own rice and lentils, raised water buffaloes for milk and manure and goats and chickens for meat. As a cultural anthropologist raised on camping trips in the Pacific Northwest, I adapted well enough to the rustic living conditions. But as a new mother, I often wished for some amenities: an indoor, sit-down toilet, a hot shower, a washing machine. I also craved things I thought might be essential for rearing children: sippy cups, baby food grinders, guard rails, tiny shoes. But looking back 27 years later, I marvel at how little it took to raise a child in a Nepali village in the late '80s and early '90s. Most raised their children the way people have been doing for centuries, with abundant love and not too many things.

Here are a few baby goods I'm now glad I did without:

Many villagers carried babies in their arms or in a simple sling. My mother sent me a Snugli so I could distribute weight across my shoulders and keep my son warm and calm against my chest. I was grateful for it. As he grew heavier, and my back began hurting on longer walks, I did dream of a stroller. Of course, it wouldn't have worked well on our rutted pathways. But more than that, I didn't really need it. There was always an aunt, uncle, cousin or neighbor nearby, eager to carry my son for awhile. And he grew up happy to be carried, or cared for, by anyone.

Three generations of extended family shared beds and bedrooms in our home. There was no space for a designated baby room. There was also no desire for it. Relatives and friends there expressed horror when I told them how people made babies sleep separately in the U.S. In Nepal, a child simply sleeps with parents or other relatives, swaddled in family blankets. I loved sleeping beside my infant son. He fell asleep easily, and when he awoke hungry I could breastfeed him on my side. We drifted back to sleep together. When we returned to Nepal when he was older, he sometimes slept with me but more often snuggled up with one of his cousins.

We didn't have any bathtub or shower in our home. We were considered lucky to have a water pump that delivered clean groundwater. It used to sit on a platform of slimy wood. When my husband and I began living with the family, we paid for an upgrade to a cement platform. To bathe, we squatted on the platform in scant clothing, pumped water into a plastic bucket and scooped it out with a small bowl. We did heat water to bathe my son when he was an infant and ladled it over him in an aluminum pan we used for laundry. When he was a bit older, we propped him up in a plastic bucket. As a toddler, he learned to endure bucket showers, an adaptation that has served all of us well in our family travels over the years.

Time- and place-wise, we were lucky. No one in the village had electronic screens -- not even televisions -- as everyday household items. Families spent days and evenings outside on their verandahs -- chatting, singing, shelling beans. So, my son had a constant stream of fans fondling his fingers and toes, lifting him up and wiggling him, taking him for bouncy walks, blowing raspberries on his tummy. In his first eight months, I noticed he had a particular fascination for the faces of elders. He'd stare at their deep wrinkles and smile, then track their eyes the way I've seen young ones now track movement on smartphones and computers.

I'll admit part of me wanted to shower my son with the toys I craved as a child: plastic dinosaurs, Etch A Sketches, Legos, stuffed animals. And when we lived in the U.S., we did indulge in some, especially when we scored them second-hand. But we didn't pack many toys to Nepal. There, my son played with pots and pans, stones, sticks, goats, dirt, cousins. He climbed mango and ficus trees. And he never complained about boredom there the way he did surrounded by toys in the U.S.

Relatives built a small, wooden cradle for my son. We hung it from the eaves of our thatched roof shed. It was not meant to be a place for him to spend hours and hours. But if he fell asleep, we might set him there while we sat and talked or worked nearby. And when he woke, he often lay there content for awhile, watching light and colors through the slats, sparrows flitting in and out under the eaves, or a smiling grandparent or cousin rocking his cradle. 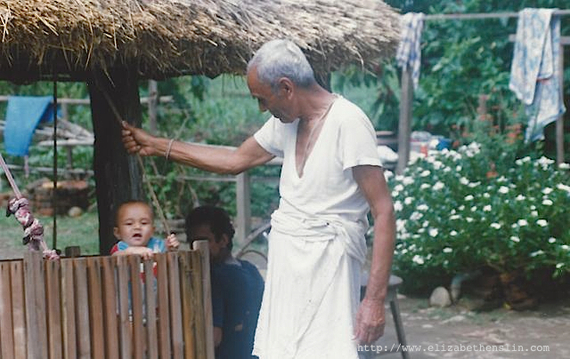 More:
raising kidsParenting Parentsmodern parentingthird metric
Newsletter Sign Up
Raise the kind of person you'd like to know
Subscribe to our parenting newsletter.
Successfully Subscribed!
Realness delivered to your inbox