It's no secret that we parent each kid differently. With my first one, I was on the floor during tummy time, running around to multiple Mommy & Me classes and diligently teaching her the Rules of Life: say please and thank you, share, don't play ball in the house, don't stick your finger in the fan, only one hour of screen time. My second one got the same drill, but without as much urgency, because it's hard to enforce the "rules" when you're fishing lipstick out of the 18-month-old's mouth while your 4-year-old is screaming "I want Elmo now!"

My third girl is now 3, and I've finally learned that some things simply aren't worth getting my panties in a bunch over. Here are a few things I let my third child do that I never would have allowed the first two to do at her age:

1. Ride a scooter in the house.
I used to get so annoyed when outdoor toys found their way indoors: sand buckets and pool noodles, hula hoops and soccer balls, the tricycle, the scooter. Now, I just take three deep breaths and look away. So what if the 3-year-old keeps crashing into the walls, leaving skid marks on the wood floors and dents in the floorboards? I have more important things than resale value to worry about, like trying not to burn dinner. 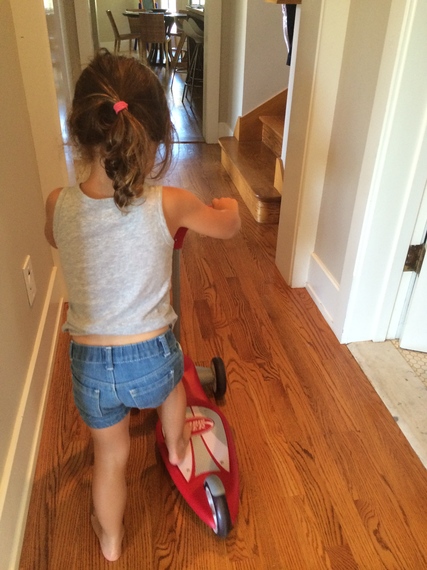 2. Use real scissors.
I know it's not exactly safe, and we do have a pair of those crappy, blunt-tipped kid-friendly scissors, but the 3-year-old refuses to use them because she wants to be just like her big sisters. I don't tell her no because I can't deal with the yelling. (I get enough of that from my 12-year-old.) Meanwhile, the joke is on me because I have to stop obsessively checking Twitter and supervise if she's going to use grown-up scissors, right? At least this gives me the opportunity to teach her how to be safe around sharp objects, like the Leatherman Multi-Tool, my beloved pruning shears and the X-Acto knife in the junk drawer.

3. Eat candy for breakfast.
Well, not for breakfast, but certainly before breakfast. Why, you might ask, do I feed my 3-year-old corn syrup-laden sugar toxins so early in the morning? Well, I'm sort of in a bind: When toilet training, I used candy to reward the little tyke for pooping in the potty. This "tradition" has continued and I don't know how to make it stop. Actually, I'm too lazy to make it stop. So I still give her a lollipop if she poops in the potty, even if it's 5:37 a.m. Because it's hard to go back to sleep with a 3-year-old whining in your ear about a lollipop.

4. Skip meals.
My third doesn't always eat at meal times, and some days, she does nothing but snack on yogurt and Veggie Booty. I used to chase the other two around with broccoli dangling off a fork, fretting that they weren't getting enough protein or vitamins or whatever. Now, my mantra is, "This is dinner. If you don't eat it, you're not getting anything else." I do still worry just a teeny, tiny bit that she's starving to death, but I get over it. Turns out kids eat when they're hungry and know what their bodies need. The other day she ate a raw kale salad for lunch. #winning.

5. Pee on the front lawn.
I think this one is just plain laziness on my part and a downward spiraling of my concern for hygiene. We're outside blowing bubbles or jumping on the Stomp Rocket or spraying the roses with the foul-smelling anti-deer spray when nature calls. Sure, the house is right there, but why run 15 feet when you can just pop a squat right where you are? I see it as a feminist move on my part: If boys can pee outside, so can girls.

6. Cut in line.
This happens most often at the playground, while waiting for the swing or a turn on the slide. I promise, I've coached my kid about taking turns, but there comes a point when I'm just blathering on at her to be patient and wait her turn for the benefit of the other parents hovering around the monkey bars. Now I retreat to the sidelines and let the inmates run the asylum. More often than not, some slightly older kid schools mine about cutting and turn taking, and she usually says something like, "Oh, yes. You have a turn. I have a turn." Unless some kid cuts her in line. Then she's all like, "IT'S NOT YOUR TURN!" That's my girl.

Clearly, I'm more chill about parenting than I was when my first two were young. Either that or I'm just plain tired. Could be a little bit of both.