1. Take advice or leave it.
When you are a first-time mom, you get LOTS of advice. Between what to feed baby, when to feed baby, and how in the H-E-double-L to make baby stop crying and go to sleep, everybody has something to say. And without a doubt, this can be confusing, annoying, and sometimes downright infuriating. But here's something else it can be: helpful. I wish I had been able to see through my dense postpartum fog that it really is OK to listen -- it doesn't make you any less of a mother to admit that you don't know, and to take what others have to say to heart. Sure, there are plenty of instances when it's best to tune out all the self-proclaimed baby whisperers and listen to your gut -- after all, you are the expert on your own babe. But, if I had to do it all over again -- which is kind of terrifying to imagine -- I would try to be less pessimistic and prideful and more open to the pearls of wisdom I was offered, some of which proved to be incredibly true: breastfeeding did get easier, the dreaded tummy time was not all that necessary, and Cody's flat head sure did round out with time! Thank you, well-meaning people of my life -- you totally told me so. And I'm sorry for yelling at you so much those first few months... the hormones are entirely to blame.

But no, I still cannot heed your warning to kick the little guy out of my bed and into his crib. Not yet!

"They say we have to get him on a strict schedule."

"They say he shouldn't nap in the swing."

"They say he has to cry it out so he can learn to self-soothe and put himself to sleep."

Well, guess what? "They" didn't have to listen to my baby's bloodcurdling screams the first (and only) time we attempted a little tough love at bedtime. What I've learned is that while it's important to be well informed when parenting an infant, the plethora of information you'll find is not always pertinent to your infant. And with all the conflicting info you'll come across, there is really no right or wrong way -- there is only your way, the one that works best for your baby and family.

3. Stay connected, but savor the solitariness.
New motherhood can be very isolating; I knew that going into it. So, I made an extra effort to connect with friends who live nearby and also signed up for a Babycenter.com account, which has turned out to be the best and worst decision I've ever made. (If you're unfamiliar, "BBC's" community forum is like a virtual mom group with a crazy cast of characters who love acronyms, drama, and giving BTDT -- been there done that -- advice. Best part about it? You can attend without even getting out of bed. Worst part? It is the most addicting way to waste time that you don't have.)

What I didn't know about the new-mom isolation, though, is that it's not always a bad thing. Reflecting upon the last six months with my baby boy, many of the moments I treasure most are the ones we spent alone, just the two of us -- taking long walks around town, nursing in bed, reading story after story, making silly faces at each other in the mirror. We endured tough times together, too -- struggling to breastfeed those first few months, stuck inside the house all brutal-winter long as blizzard after blizzard blanketed us in white; I wondered if my January baby would ever see the sun. Then spring came and I knew that our struggles had made us stronger. Our bond was unlike any I'd ever had, and I grew so fond of the quiet times when I could shut out the rest of the world and just be with my boy -- the boy who I still can't believe began in my belly and has become the most delightful little person I've ever known. I think there are few stages of life as surreal and intimate as the early months with your baby. I already feel nostalgic for this special time with Cody, and it's not even over yet.

4. Don't shut the shutter.
Take pictures. Take tons and tons of pictures. Take so many pictures that you run out of room on your camera and phone and have to load them onto your computer and buy an external hard drive to ensure that you never lose them because there is no material possession on Earth so precious! There have been times over the last several months when I tried to cut back on my compulsive picture taking, because it was getting pretty "out of control." But I've since concluded that what is more out of control is how fast babies grow and how much they change. There is truly nothing sweeter than looking back at old photos of your babe who you thought, at the time, couldn't get any cuter, and who you cannot believe was ever that small. So who cares if you're completely camera crazy! The first six months of being a parent can seem endless at times, but ultimately, they're gone in a flash, and you can't ever get that time back. Capture every moment.

5. Lie a little.
I'll be honest: I've spent many a Saturday night in the last six months covered in spit-up, just counting down the minutes until I could collapse into a sleep-coma that would be interrupted no fewer than three times throughout the night. As it happens, these were also the nights when I did my most prolific Facebook posting. I'd post pics of Cody in the stroller, Cody at the beach, Cody looking fresh to death in his new OshKosh B'Gosh. Cody has acquired more "likes" and comments in his 6 months of life than I have in my 25. And as silly as it sounds, those "likes" and comments always lifted my spirits and made me feel that much more unbelievably lucky to be Cody's mom.

Do these shameless look-at-my-adorable-baby posts paint the whole picture of my postpartum life? Of course not. Do they make me feel better? For sure. I admit there is often some dissonance between the "story" I tell through social media and my reality; I think this is the case for most people, and I think it's important to acknowledge. But after six months of being a parent, I've also adopted a new philosophy, which is: you do what you gotta do to stay sane. Speaking of sanity...

6. Cut yourself a break -- and a piece of cake.
I remember one morning when Cody was maybe 2 months old, I was so utterly exhausted that I spilled a whole bottle of breast milk I'd just pumped, a whole mugful of coffee I'd just poured, and, after the fact, a whole bunch of tears. Needless to say, I needed a break. It is hard to admit as a first-time mom that you can't "do it all," all the time. But the last half-year has taught me just that. While indulging in cake has never been much of a problem for me, having self-compassion is definitely a work in progress. I guess this is why "they" say that having a baby is so humbling.

Thank you, sweet Cody, for teaching me as much -- though probably more -- over the past half a year as I have taught you. Happy Half-Birthday, handsome man! I love you even more with every passing day. 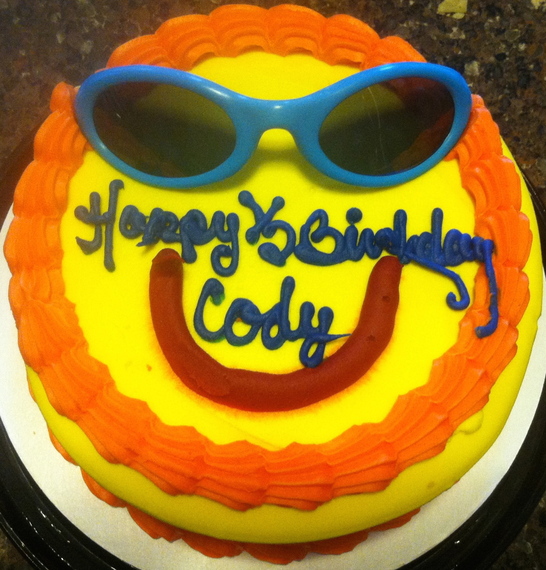