Few leaders of our time have achieved a popularity and reverence more universal and enduring than the Dalai Lama. Through his tireless work to promote social justice, universal responsibility, secular ethics, interfaith harmony, and nonviolent principles, he has made a monumental contribution to alleviating human suffering and increasing, for lack of a better word, the Gross Global Happiness. 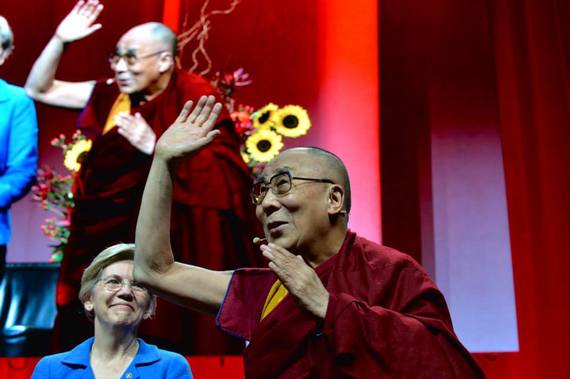 Naturally, it must have been deeply confusing for thousands of people that during his most recent tour of the United States, a mysterious group of protesters has been hounding the Dalai Lama at every stop, from Alabama to Princeton to Boston to New York.

Who are these protesters? Where do they come from? What do they want from the Dalai Lama? Who is benefiting from their protests?

Here are six quick facts you need to know about the anti-Dalai Lama protesters:

1. They are Geluk supremacists. The protesters belong to a fringe group of Buddhist extremists who worship a deity called Shugden and pursue an ideology of Geluk supremacy. Tibetan Buddhism has five sects, namely Geluk, Sakya, Nyingma, Kagyu and Jhonang. Within the Geluk school, there is a subgroup whose propitiation of the Shugden deity has historically forbidden its members to read the scriptures of other sects and study with lamas of non-Geluk schools. This controversial ideology of Geluk supremacy, which fueled sectarian tensions among Tibetans for hundreds of years, is what the Dalai Lama set out to eradicate when he discouraged the worship of this deity. In keeping with his progressive and reform-driven policies, the Dalai Lama (who traditionally belongs to the Geluk school himself) has gone out of his way to study with various lamas from other traditions, urging that all sects must be accorded equal respect. These reformist measures of the Dalai Lama, aimed at promoting inter-sectarian harmony, has made him anathema to the Geluk supremacists.

3. "The Dalai Lama is a Muslim!" The protesters have accused the Dalai Lama of being a "Muslim." First of all, to use the word "Muslim" as an insult betrays a level of racism and Islamophobia that has no place in today's world. At any rate, the claim that the world's most famous Buddhist is secretly a Muslim is so ludicrous that it does not merit any serious response. They have also claimed that His Holiness is the "False Dalai Lama." If that's the case, then who is the real Dalai Lama? Is Geshe Kelsang Gyatso, the leader of the Geluk supremacists, who allows only his own books and writings in his center, the real Dalai Lama? Or are they waiting for Beijing to find and recognize the real Dalai Lama?

4. The Geluk extremists are supported by the Chinese government. In 1997, a highly respected Tibetan scholar, who criticized the worship of Shugden as a deviation from true Buddhism, was assassinated in Dharamsala, India, along with two of his students. The assassins escaped from India and went straight to China, who gave them safe haven. The Indian police linked the murders directly to the Shugden association and Interpol issued a Red Notice to China. For Beijing, the Shugden controversy presented an opportunity to undermine the Dalai Lama and the Tibetan cause. It decided to support the Geluk extremists to sow discord among Tibetans - this strategy fits perfectly into China's divide-and-rule policy. Read more stories that follow the money to China. 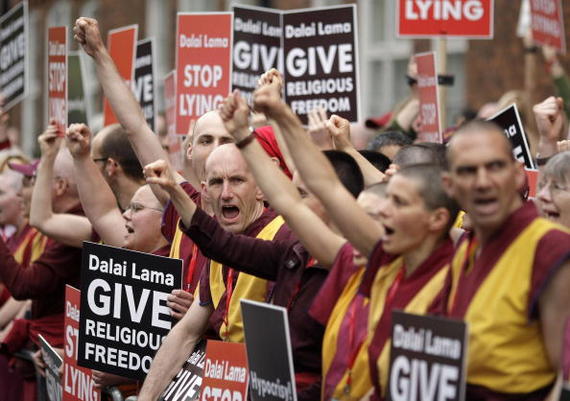 Members of the Western Shugden Society protest as the Dalai Lama arrives at the Royal Albert Hall in London, on 22 May 2008. AFP/Getty Images/Shaun Curry

5. They are barking up the wrong tree. These protesters are overwhelmingly white American and European men masquerading as Tibetan monks and victims. For these privileged citizens of Western countries to accuse the Dalai Lama, a homeless refugee with no army and no police force, of suppressing their religious freedom is not only absurd, it is just plain evil. That kind of deception, far more than the Dalai Lama's reformist policies, threatens the "pure Geluk tradition" that they claim to defend. These people have no connection whatsoever to any organization or institution controlled by the Dalai Lama; he could not suppress their freedom even if he wanted to. The only person who would be able to exercise control and coercion over them - and thus take away their religious freedom for real - is Geshe Kelsang Gyatso, whose mysterious organization they had joined without knowing what they were signing up for. Read testimonies from survivors of the New Kadampa Tradition.

6. The protesters aim to undermine the Tibetan cause and advance China's agenda. There are many unsettling parallels between the language of the New Kadampa Tradition and that of the Chinese government. Both have accused the Dalai Lama of being a CIA stooge. Both have called him a Nazi. Both argue that pre-1959 Tibet was a "feudal serfdom". This group wants you to believe that the CIA saved the Dalai Lama; in all likelihood, they even want you to believe that China "liberated" the Tibetan people from the Dalai Lama. But the theory that "the Dalai Lama would never have been saved without the CIA" is pure fiction; it distorts history and steals the truth from the Tibetan warriors who risked their lives to escort the Dalai Lama from Lhasa to India. Therefore, the New Kadampa Tradition and the anti-Dalai Lama protesters are no longer just Geluk supremacists, but they are also the most useful instruments in the Chinese government's colossal master plan to obfuscate the Tibet issue and delegitimize the Tibetan struggle for freedom.

For a more detailed religious history of this cult, read the articles by Tibetologist Thierry Dodin and Professor Robert Thurman.

Writer, activist, and researcher at the Tibet Action Institute