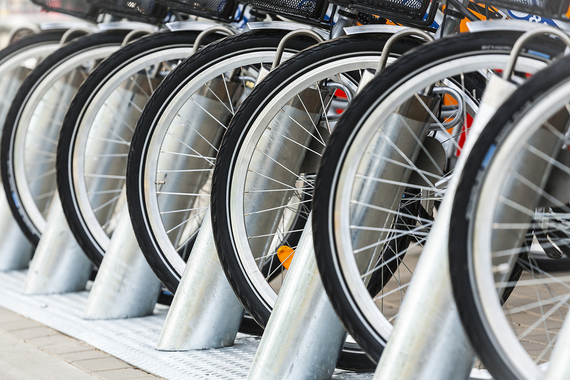 With the recent Amtrak accident in the Northeast Corridor that killed eight, Tracy Morgan's first post-TV appearance since a Walmart 18-wheeler crashed into his van, leaving him in a coma and killing his friend in June 2014, and the suicidal plane crash mission of the Germanwings pilot Andreas Lubitz that left 150 people dead, it's a wonder anyone leaves the house anymore. And yet we have to. We can't spend our lives living in fear, calculating our personal safety risk for simply going about our lives.

The Israelis are excellent examples of this: Even in the face of terrorism, the businesses and schools in their cities and towns open their doors the next day to say, "You did not win this. Life will go on." Yes, there is a marked difference between sheer accidents and planned acts of terrorism, but the point is that you never know what's going to happen -- it's why all those expressions about living in the moment and not worrying about the future exist; don't worry about tomorrow because you might not even get there.

So now we've talked about trains, planes, automobiles and bombs, but with the summer months officially here, it's time to talk about bicycle safety. In the United States, many urban environments are implementing mandates to go green, employing more bike lanes and bike-sharing programs like Citibike. According to the National Highway Traffic Safety Administration, "69 percent of fatalities for bicyclists happened in urban areas in 2011." Biking, like any mode of transportation, can be a dangerous and potentially deadly business. Streetsblog NYC reported that in December 2013 alone, "175 cyclists were reported hurt in collisions with motor vehicles."

Biking provides great pleasure and health benefits, and sometimes can get you places faster than a taxi or public transportation, but it's best to yield caution by following these tips below:

Don't assume other cyclists, pedestrians or motorists see you. We live in a distracted world. You might not worry about yourself, but what about everyone else? There is no guarantee others see you. Assume they don't and proceed cautiously.

Wear a helmet. Helmet hair is nothing compared to lack of helmet brain in the event of an accident. NYC requires children under the age of 13 wear a helmet at all times, and recommends it for everyone. Many cities like Chicago have no legal requirements requiring helmets. Wear one. According to the CDC, "In 2010 in the U.S., 800 bicyclists were killed and an estimated 515,000 sustained bicycle-related injuries that required emergency department care. Roughly half of these cyclists were children and adolescents under the age of 20. Annually, 26,000 of these bicycle-related injuries to children and adolescents are traumatic brain injuries treated in emergency departments."

Don't text or call when riding. The "Don't Text & Drive" campaign is just as applicable when on two wheels. Save the technology for later, when you can pay attention to it.

Be wary of parked cars. You never know when a person in a vehicle will swing open a door in your path because he or she doesn't see you or isn't expecting you. It's better to slow your speed in order to have faster reaction results with less impact in the event someone or something enters your path suddenly, whether it be a car door or a pedestrian.

Use bells and hand signals. If you're the little guy on the road (and bikes are smaller than vehicles), then fight for yourself. Use the appropriate hand signals and your bell to communicate direction and warnings.

Get a tune-up. Bike accidents can happen due to equipment failure. If your bike has been sitting in storage or your garage all winter, get it tuned up first to make sure the tires, alignment and chains are functioning well.