"No, no, no, it's 'gel-AH-TOH', not gel-ah-DOUGH!" my Italian friend says as he reminds me how one pronounces the famous Italian treat. Gelato is a mainstay in any Italian's life and any tourist's blitz of the Italian peninsula. The tradition goes back hundreds of years to the mountains in Northern Italy. Snow was used to keep the mixture of cream, sugar, eggs and flavoring at the perfect temperature all the way back to the 1500s. For those thinking "Wait, what about Sicily?! I heard that's where gelato comes from!" Not so fast, that's where the delicious arts of granitas (a frozen, flavored drink that a layman would equate to slushies and slurpies while simultaneously turning any granita connoisseur over in her grave), and sorbets come from. Alas, a topic for another post.

Back to gelato. After many years exploring Italy's towns and cities sprinkled across the "touristy" spectrum, I've picked up a few tips on how to select the right gelateria for your newly-found discerning tastes. This is important as you'll never find a gelateria willing to give out as many samples as a Baskin Robin's 31. You may get away with one or two tastes before you commit as long as you ask nicely i.e. "per favore" and "grazie" etc. But after that, you've gotta choose.

Here's what you have to look for when selecting your gelateria:

1. Color. Check out the Banana and Pistachio flavors, and make sure they're the right color. "What's the right color?" you ask. The natural one, of course! So, for banana, that's a grayish white, and pistachio should be an earthy green, not a neon or lime green. If the banana flavor is bright yellow, I'd wonder how many peels they're putting into that recipe, and keep looking.

2. Shape. Gelato is kept at a relatively warmer temperature than the "ice cream" Americans may be used to back in the states. This allows for the flavors to be that much more pronounced and vivid. The right temperature for gelato puts the mixture at an almost-liquid state, so the best gelato will be found when you look in to metal tins behind the window. Touristy places attract customers with piling theirs high and stacking it with all sorts of beautiful memorabilia. While nice to look at, you should do only that and keep on moving until you find your gelato in metal bins you have to look in to!

3. Ingredients. You want real, authentic ingredients in your gelato, don't you? So keep a peeled eye looking out for stacks of artificial flavoring bags just behind the counter. Don't ask me why, but some gelaterias stack their artificial flavoring in plain sight for all to see. That's another immediate indicator for you to keep on walking if you want a memorable gelato experience.

Cool, so you've picked your place. You've confidently put all your gelato eggs in this one frozen basket. More likely than not, the place is packed, loud and busy. Remember, that's a good thing! The more you've got to sharpen your elbows, the better. Italians just wouldn't have it any other way. Here's what to do next:

1. Pay first. Alright, you've found your gelateria, and you're about to make your mouth very happy. But first, you generally have to pay at the cashier which may be on the other side of the store. Let the attendant know what size you'd like (cone and cup are usually the same price). Personally, I always stick with a small cup with two flavors. It let's you save room for some more sampling later on:)

2. Head to the bar and select your flavors. Take your receipt to the smocked-up team behind the gelato bar and say "cono" or "coppa" (a little sign language never hurt anyone either), followed by your flavors. Important: there are some unwritten rules of etiquette that the gelato-scoopers may enforce upon you. They have mainly to do with flavor pairing. As gelato is either cream-based or fruit-based, those who take gelato a touch more seriously believe you should never mix bases. Let's talk scenarios: Pistachio & Coffee: a-okay. Orange & Melon: cool. Lemon & Chocolate: that's a no-no. Flavors are generally grouped by their bases to help.

3. "Panna?" And lastly, every gelato-eater is entitled to a slathering of fresh whipped cream on top. Don't worry, it's up to you to decide if you want it.

Congrats, you're now equipped with everything you need to know to track down and taste Italy's best gelato.

Last week, I was in Giolitti's, definitely one of Rome's most popular gelateria's, and I found this little doo-dad: a QR scanner so you can skip the line, pay via phone and go straight to redeem your tasty prize. I was struck by the seamless combination of this age-old tradition and modern technology. It was the first time I had seen this application used in this way, and I'm excited to find out where it takes us! 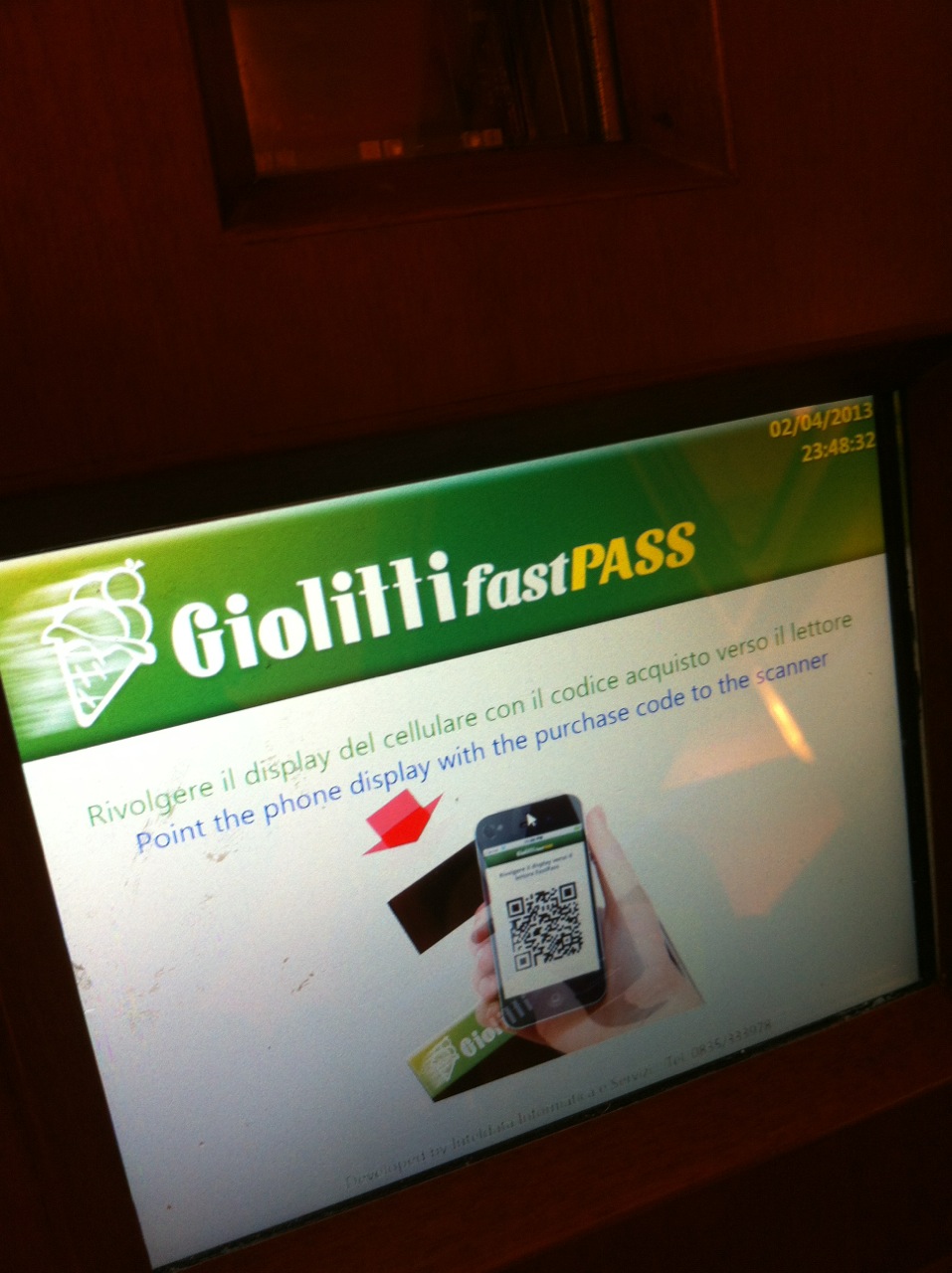 Don't worry, since Italy is packed with so many tourist sights, and you're inevitably on your feet all day, don't worry, you've earned those calories!