For a self-published author, receiving a bad review feels a lot like taking a kick to the stomach. It hurts deeply and often takes the wind right out of you. Anger is usually the next emotion, followed by feelings of self-doubt and inadequacy. It's not a pretty cycle, but it does come with the territory. The key is not taking it personally. I know; easier said than done.

One thing to keep in mind is that you are not alone. Every book is bound to have at least one bad review -- self-published or not. Take a look at some of these hugely popular titles, including a bestselling book written by John Grisham and published by Random House and one of the top selling self-published titles of all-time: 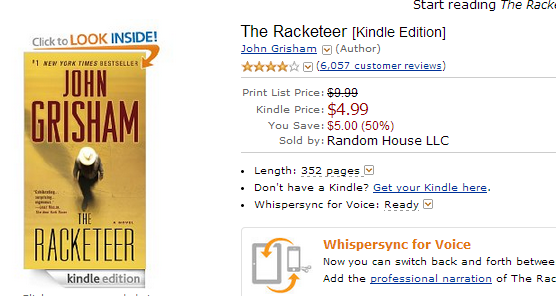 So how should a self-published author deal with a bad review? Here are some ways to cope:

A Bad Review is... Still a Review.

I won't go as far as saying that a bad review is better than no reviews. This is simply untrue. If a book has only one review and it's a negative one, potential buyers may be turned off and choose another book. If you've already accumulated some positive reviews, a bad one is not going to destroy your book's marketability or have a huge effect on sales. In fact, sites like Amazon give greater weight (better rankings and visibility) to books with higher overall number of reviews. This is why many people try to cheat the system. The point is to keep things in perspective. One bad to twenty good is a pretty awesome ratio!

Don't get all Jackie Chan. Look to Buddha.

No matter how much you disagree with a review, it makes no sense to go on the warpath. Public meltdowns or inciting an argument over a review are not attractive ways to handle your resentment or anger. Plus, words are pretty permanent given the Internet. You don't want THAT kind of negativity following you around for the rest of time. Rather, take a cue from Buddhism. Tolerance is a virtue. It doesn't mean you're weak or allowing someone to walk all over you. Tolerance is the acceptance that other people hold different views from our own. And that's okay.

It's not personal. It's business.

As I mentioned above, the key to overcoming the feelings associated with a negative review is to not take it personally. Your book, while a labor of love and very much like your baby, is a product. You are an entrepreneur. As a self-published author, you are in the business of writing books to make money (at least most of us are). So you wrote the book. It was your concept, your idea, your story. It's still a business and no different than a plumber fixing a broken pipe using the skillset that he or she has or a doctor putting his many years of schooling to work in the operating room. Applied skills or expertise for the pursuit of monetary gain is at the very essence entrepreneurship.

Ignore the trolls. Embrace the teachers.

As a self-published author, you need to learn how to distinguish between constructive criticism and offensive rants. The latter you can simply ignore. Karma will take care of them. The former you should embrace and learn from. Helpful criticism stands to make us all better writers.

Let your fans have at it. Them, actually, in this example.

There's nothing more powerful than a community of passionate people. If that community happens to be loyal fans or readers of your book, chances are they'll see the negative review and respond accordingly. Or you could nudge them in that direction.

Let your voice be heard.

You always have the option of responding to negative reviews. If I were you, I would respond tactfully and with grace. But that's just me. For example, if someone left helpful criticism, I would thank them. If someone went on a vicious rant without an actual point, I would leave it alone. Or... I might respond with cool satire or sarcastic wit. That can be very therapeutic!

At the end of the day, the best way to overcome the negative reviews is to find reviewers who enjoyed your book and are willing to post their feedback on Amazon and other platforms. Don't be shy! If you know someone who has bought your book and genuinely liked your work, ask them for a review. Remember, you're an entrepreneur.

If you're still not convinced, here are some epic tips on handling reviews from the great Joe Konrath and Carrie Rubin.