I'm a firm proponent of the idea that becoming a parent doesn't have to change your entire life, but even I have to acknowledge that it definitely does change it. Just not that much. Your personality and interests and even your lifestyle can survive the transition to owning children, believe me. My blog is living proof that you can keep your sh*tty personality and hateful sense of humor and steady drinking habit when you become a parent; you simply have to want to.

I didn't stop being a sarcastic jerk when my son was born, even though I quite sincerely love him with all my blackened heart. And I didn't stop drinking, or going out to eat with my wife, or watching the TV shows I like and the sports I love.

The bottom line is, in many ways, being a parent is a lot like not being one...

1. You'll still drink.
I might even say I drink more now that I have a son, because I'm home more (babysitters are expensive!), and it's cheaper, and my son drives me to it. Plus, he crushes me at quarters.

2. You'll still watch TV and rent movies and listen to music.
I might even say I watch more TV, and rent more movies and listen to more music now that I have a son, because, as I said above, I'm simply home more (babysitters are expensive!). As for music, well, I wear my headphones at all times so I don't have to hear my kid's constant yapping. I manage to get it all in. So don't worry, pop culture will still be consumed if and when you have children. Today's technology makes it easier than ever to get your daily fix, even if it's while your kids are in the sandbox or the bathtub or the basement or wherever the hell they ran off to. (Have you seen them? I'm in the middle of House of Cards. ) Of course, with all the terrible crap your kids are going to make you watch, you'll probably get even more pop culture than you bargained for.

3. You'll still hate kids.
Just not your own. At least not most of the time. Having kids of your own doesn't suddenly make you fall in love with every kid you see. Quite the contrary. Instead of loving other people's kids, you end up disliking them even more than you used to, simply for not being yours. For not being as cute as yours or as smart as yours or for being cuter than yours or smarter than yours. And God forbid you get a babysitter so you can finally visit that fancy restaurant you've been dying to try after months of eating at nothing but kid-friendly dumps, only to sit down and notice that some insane couple actually brought their kids. You'll never hate kids more than when you can't even hear the pop of your champagne bottle over the screaming of a 6-year-old who just dropped his matchbox car on the floor.

4. You'll still love your spouse.
Provided you did to begin with, of course. Having kids changes your relationship with your spouse, but it doesn't change how you feel about your spouse. You'll have to work harder at your relationship, and prioritize it more than you have since the courtship phase, but let's be honest: you should probably be doing that whether there are children involved or not. Kids don't validate a marriage, and they certainly shouldn't be had in an attempt to save one, but they don't have to end one either. Every time my wife and I hug, my kid runs over to join in, and while I'm no fan of cock-blocking, having someone new to hug doesn't deplete my love for my wife. You don't suddenly run out of love to give just because there's someone new who needs it. It's not M&Ms.

5.You'll still be an a**hole or a nice guy or a bigot or a romantic or a ...
Becoming a parent doesn't fundamentally change who you are. It definitely shines a light on both your best and your worst qualities, and it forces you to re-evaluate your priorities and alter your lifestyle, but you're still going to be the same person at your core. If you're a jerk, you're probably still gonna be a jerk. I mean, look at me!

6.You'll still have fun.
It's possible. Now, some of the fun may be a little bit different than you're used to, but fun doesn't just disappear. As stated above, you can still drink and watch TV and go out to dinner (sometimes) and have sex (sometimes) and go to concerts (sometimes) and follow your favorite teams and play fantasy football and hang out with your friends (even if they *gasp* don't have kids!). Life is life and responsibilities are responsibilities. Kids are just a big new one that you have to work around. And while you might have a little less time for some of the fun you used to have, you'll also have a new source of fun living in your house. And when he gets older, he even comes with video games!

Pretending my life hasn't changed since I had my son three-plus years ago would be idiotic. Of course it's changed. Just not that much. Yes, we have less money and less free time and less sleep and more, or more accurately, different stress, but other than that, we're the same people. We probably swear less, but not a sh*t-ton less, and if swearing is what defines you, can I have your autograph, Mr. Dice Clay?

Mom and Buried and I strive to maintain some semblance of who we were and how we lived pre-Detective Munch, and we manage it, give or take a hijacked Netflix account or occasional weekend devoted to visiting a hellish Sesame Street-themed amusement park. Anyone can do it; the trick is maintaining some balance and a little separation between your parent self and your non-parent self. Kind of like George on Seinfeld.

Kids are neither prison (despite what I may have led you to believe) nor panacea. You can't count on your children to be the heroes in your life, and you should obviously never cast them as the scapegoat. If you find yourself doing that, figure out why, and then stop.

Life is what you make it, so if your kids are ruining yours, find an undestructive way to change that. I started "Dad and Buried" to make sure I stayed the person I was before I became a parent. But if there's anything the past three years have taught me, it's that I didn't need a blog to accomplish that.

Just wanting to was enough. 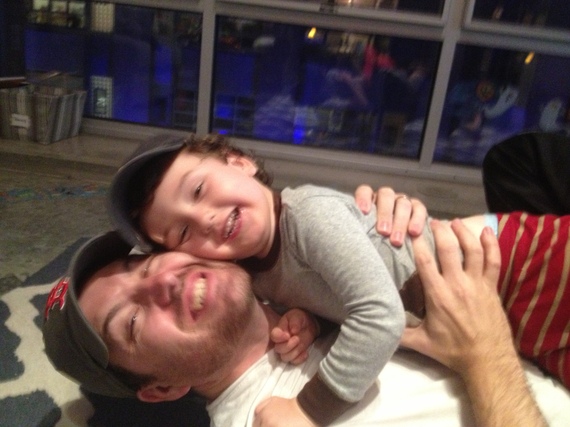 Read more from Mike Julianelle on Dad and Buried.