Sometimes I look at them and I'm like, Why? I looked way better in a bikini before I got them. Oh well! Too late now! I am talking about kids and tattoos: both permanently disfiguring and not exactly like you imagined... 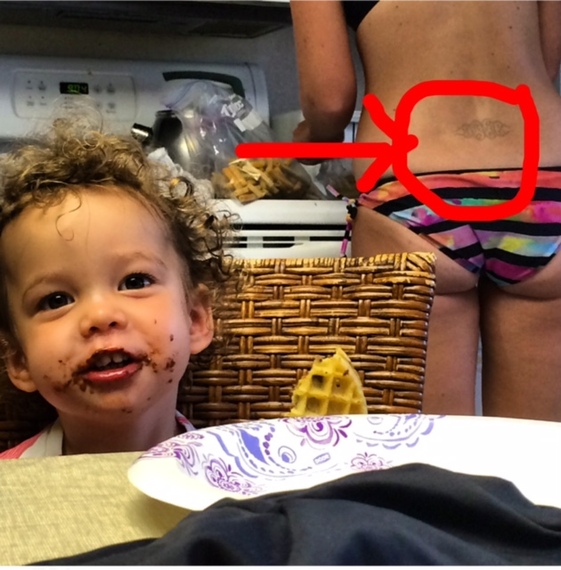 1. Great Idea When You Are Drunk: You know how after four margaritas at Senor Frogs somewhere between 1999-2004, you thought that a tattoo of Tinkerbelle perched on your hip was like the BEST idea ever? Well, girl. I feel you. That's the same kind of decision-making that turned a lot of us into parents in the first place. Fast forward about 10 months and you might wish Tink was the only thing perched on your (now stretch-marked) hip. Whoops!

2. Hurt Like Hell: Much like your sweet tramp stamp of the (incorrect) Chinese symbol for peace that you thought couldn't hurt that much because people get tattoos every day, having a baby is painful AF. Like being set on fire and eaten alive by a shark and then pushed off a cliff.

3. Does Not Look Like You Expected: Before I actually got it, I daydreamed about what the owl tattoo on my arm would look like. (P.S. OBVIOUSLY I have a bird tattoo on my arm. I mean O B V I O U S L Y.) As the tattoo was finished, I was like WTF. Not what I pictured. Having a baby is basically the same. I thought I was getting a little doll miniature of me and my man. What I actually got was a screaming bright red baked bean that looked like my dad?? Um. Refund? Time machine?

4. Expensive: This sh*t was $400!! Even though it looks like something a fellow inmate gave me in exchange for some contraband smokes. And don't even get me started on what the baby has cost us. Every penny. Every last one.

5. Permanent: In moments of regret, I have looked into having my tattoos removed. Likewise, I have been in the aisles of the grocery store with three screaming kids and wondered... can I somehow throw them off my trail? Turns out tattoos and kids are both F O R E V E R. But strangely...

6. You Want One More. Despite being the expensive, painful, permanent, and not-instantly-good-looking idea of a drunk chick... I still want just one more. Even though people are probably talking about how crappy the ones I already have are. Just one little Russian nesting doll on my shoulder and I will be done. And fine, just one more little beet-red infant to scream at me while I try to keep it alive. Last one. Promise.

More:
parenting humorthe-playroomParentstattoosvoices
Newsletter Sign Up
Raise the kind of person you'd like to know
Subscribe to our parenting newsletter.
Successfully Subscribed!
Realness delivered to your inbox