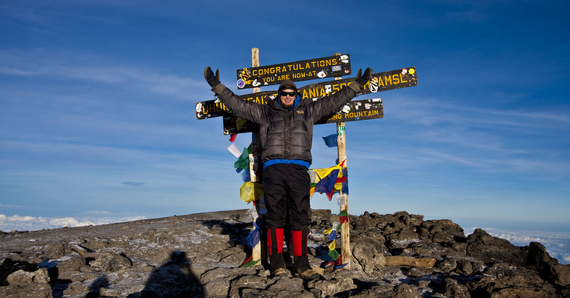 We all do this. We browse our Facebook feed and see extraordinary things happening all around us. A Facebook friend just climbed Mount Kilimanjaro. A friend of a friend won The Great Food Truck Race. Someone else was named Chicago's Teacher of the Year. Or California's No. 1 Realtor. Someone's teenager just got a perfect SAT score.

It seems to happen all the time. Is the extraordinary the new ordinary? Facebook makes success look easy. And fast. And, dare I say, effortless. In the time it takes to look at a photo of someone celebrating a triumph, it's just enough to feel jealous and insecure and easy to lose sight of what success looks like in real life, behind the photo.

1. Facebook success is a snapshot. A posed split-second moment in time. It's a clear, succinct, still-framed, neat package with good cropping and fantastic lighting.

Real-life success is a slow messy saga. Which is often daunting, torturous and distracted. Or at least, a mini-series with no clear beginning and an open-ended end. In fact, it's fuzzy all around the edges and the lighting is not good. That's because it's often dark (as in dark).

2. Facebook success appears out of nowhere, overnight, like a flat tire. Or your fiftieth birthday. You find yourself exclaiming, "Wow! How did that happen?" or "Hey! Where did that come from?" Like when you see a college classmate in Newsweek for the success of her tech startup, or maybe your neighbor just opened an adorable coffee shop in town.

Real-life success is grueling, slow, mistake-ridden, and often boring to tears. Well, let's just say there are tears involved, and not only because it's boring. No one wants to see a snapshot of any of this real-life stuff. Because it isn't pretty. It's chipping away at a huge hunk of marble with calloused hands, shaking and unsure, fumbling with a chisel and hammer, intimidated, etching at it sliver by sliver until something emerges years later that shocks even the sculptor.

3. Facebook success is surrounded by awe-struck admirers. Friends and family celebrating, even new friends who were recently strangers. Everyone is smiling and laughing and huddled in close proximity.

Real-life success happens after all-nighters, three weeks in Toledo away from the family, missing a cousin's wedding, late for your son's home run, night-time grad school, solo bowls of cereal. Someone who's graduated valedictorian from Harvard Med School has probably missed more than a few football games and sorority parties.

5. However, Facebook success is fleeting. It's gone in the blink of an eye. Most people will pause on a Facebook post for five seconds, long enough to feel badly about themselves because what the heck have they done lately, and when exactly are they gonna amount to anything, and if only they could have done that, too. They will soon be scrolling past this milestone announcement. They will not consider all the real-life stuff that backs up that post.

Thankfully, real-life success doesn't become stale like yesterday's Facebook status. Because it's someone's real life. It becomes part of their personal legacy. They worked long and hard. So they get to celebrate, reflect, grow. Maybe even repeat. And hopefully, inspire others along the way.