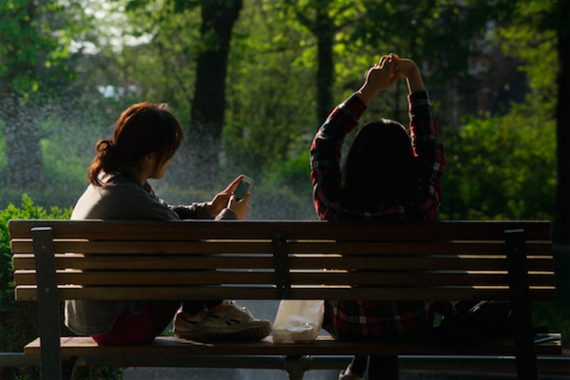 When I was 23 years old and four weeks away from graduating college, I suffered from a vertebral artery dissection, which is essentially when an artery in your brain splits in half and sets off a domino effect of other serious health issues. Many people die, become paralyzed, or suffer cognitive damage. I regained consciousness after a week, when the prognosis was that I'd either die or wake up in two months and never fully recover.

The fact that I had a vertebral artery dissection in the first place was (and still is) a medical mystery, and the fact that I fully recovered (I had to relearn how to walk for a few months) and was only hospitalized for five weeks is considered a medical miracle. I was even able to walk the stage at graduation with some help!

I could not have survived the lengthy hospitalization without the support of my incredible friends, even when they did some not-so-great things (it was a stressful time for all of us). It has been two years since everything happened, which has granted me a lot of perspective regarding what my friends were going through as outsiders, and how they positively and negatively affected me. Everyone wants to do their best, so here is some advice on what to do and what not do to help your hospitalized friend, coming from someone who has been the one in that hospital bed.

1. You may unintentionally be very patronizing, so avoid certain kinds of comments: Understandably, you will be experiencing very strong emotions while visiting your friend in the hospital. You deserve to feel those emotions, and your friend will obviously appreciate how much you care. However, you need to remember that while you are in that hospital room, your feelings about their illness or injury are secondary, so keep them in check. After my brain freaked out, it was considered a legit miracle that my fine motor skills had not been destroyed. I also recognize that I was not conscious when doctors were telling everybody about a horrible prognosis, so I can't speak on how terrifying that was because I didn't experience it on their end.

One day, a friend visited me while I was preparing for a physical therapy session. I began tying my sneaker laces -- and, mind you, as long as I'd been conscious, I'd maintained complete control over my finger and hand muscles - when he kept making comments like, "I am so proud of you for being able to tie your shoes," and "This is so amazing to watch."

Y'all, it took every ounce I had stored up in my very limited energy supply to not snap at him right then and there. I was 23 years old. I didn't need a gold star for tying my shoes properly. Completing that task did not make me an ~inspiration~. I was just trying to put my damn shoes on so I could practice walking down a hall. I understand there was context to his statement, but I had a very long, daunting road of recovery ahead of me filled with very real obstacles. Tying my shoes was not one of them. I didn't need patronizing "encouragement" about an ability that I'd never lost. I was already having to relearn how to walk, which had weakened my sense of independence enough on its own. I didn't need to be treated like a Kindergartener making two bunny ears out of her laces on top of it. Again, I cannot control how he was feeling. I understand that it really was a miracle that I had not lost those kinds of fine motor skills. BUT KEEP YOUR FEEL-GOOD THOUGHTS TO YOURSELF. THEY ARE IRRELEVANT TO THE PERSON ACTUALLY IN THE HOSPITAL BED.

2. Don't eat their food: You probably think this is a no-brainer, but OH HOW WRONG YOU ARE. Don't eat their food, OK? Just don't do it. I stayed in a hospital that is actually well-known for its delish hospital food, but my condition made it difficult for me to actually enjoy any of it. Intense nausea caused me to throw up nearly everything I ate, which made food unappetizing even on the days when my nausea was under control. Rapid weight loss followed, which was especially dangerous because if my weight dropped too low, they'd have to suspend my physical therapy; my whole recovery process would be extremely delayed.

Grapes were my godsend. For some reason, if every other bite of food made me vomit, I could consume grapes and keep them down almost every time. My nurses would bring me a fruit platter with every breakfast, lunch, and dinner in hopes that I would at least eat the grapes. One day, after having only successfully consumed apple juice, my nurses brought in my dinner and fruit platter while a friend visited. I tried to eat, but my nausea was so out of control that I couldn't even handle the fruit; all I could do was fall asleep. I woke up later, and the nausea had finally subsided. Relieved, I asked my friend to hand me the fruit platter because I finally felt like I could eat.

She had eaten the entire fruit platter while I was sleeping, and attempted to justify it by saying that she thought I was too nauseous to eat so it was just going to be thrown out anyway. Even writing about this incident years later gets my heart rate rising. It was just so careless; she could've walked down the street to Ralph's if she wanted grapes so badly. Trust me, I know that those 20 grapes would not have been the deciding factor in my recovery. But in the moment, knowing how much hung on my ability to keep on weight, they felt like the most important things in the world. I for sure started crying angry tears. It was such a painful reminder of how different I now was from my peers. To her, they were just grapes. To me, they were everything.

In short, don't eat their food. Illness and eating have a very special, complex relationship. If you're not in that hospital bed, then you don't understand it. And that's completely fine! Just don't touch the food.

3. Let them talk as much as they can: Your friend has been extremely isolated; the majority of her interactions have centered around things like blood tests and CAT scans with nurses and doctors. She is experiencing so many things, but is no longer regularly surrounded by the kinds of people with whom she can joke or talk openly about them. If your friend is physically able, let her talk as much she can. Not only is it good for her stamina, but honestly she just has a lot of things to say with no one to listen until you sat down in her room. I am forever grateful to all of my friends who let me crack bad jokes about my shaved head and gossip endlessly about a ~dreamy~ nurse. It was a shred of normalcy in my very incomprehensible life. Y'all are the real MVPs.

4. Keep them updated about their social circle: In Tig Notaro's hilarious, moving, and now classic stand-up set that she performed at Largo at the Coronet following her cancer diagnosis, and recorded for the album LIVE, she jokes about how nobody talks to her like a normal person anymore. People are so afraid to discuss anything besides her illness because everything seems so unimportant in comparison. But that's not the way to go. Talk to us about the other parts of their lives. Remind us that there is more to us than our illness. I loved discussing mundane, routine topics with my friends. It let me know there was still a world outside of my hospital room to which I could eventually return.

5. Ask what you can bring: The immense generosity of my friends was key to strengthening my spirit during my hospital stay. They brought books, magazines, notebooks and pens. When one friend asked what she could bring and I couldn't think of anything, she returned with a collection of all the notes we passed to each other in junior high; it was incredible, and reading them made for a hilarious way to pass the time between otherwise stressful tests and physical therapy sessions. Some friends of mine even spent money on In-N-Out and other fave foods simply because I asked. If you read #2 on this list, then you know I wasn't actually going to eat any animal fries. My friends knew it, too. But I wanted to feel normal, and they understood.

6. Offer to be their spokesperson, and offer other practical, concrete ways to help: It's terrible to feel powerless while someone you love is sick. But unless you are a doctor, a nurse, or your friend's immune system, there really isn't too much medical help you can provide. However, there are some very real, concrete things you can do to make their lives easier. You can be their spokesperson; lots of people are going to want to know what happened. Lots of people are going to want to know when and where to visit. This is exhausting for your friend to handle, so you can act as their PR, if you will. Also, consider your friend's unique needs. I was about to graduate from college when all of this happened, so my amazing friends picked up my cap and gown, brought me my graduation forms to sign, and then brought them back to the office, and so on. They were all so willing to help me complete the important errands that I couldn't do from a hospital bed. Life was overwhelming, but they kindly took on whatever stressors that they could.

More:
healthy livingfriendsdiseaseHealthfriendship
Newsletter Sign Up
The essential guide to taking care of your mind and body
Subscribe to HuffPost’s wellness email
Successfully Subscribed!
Wellness delivered to your inbox

A place to find useful information from the people who've been there. Learn from others. Adult together.