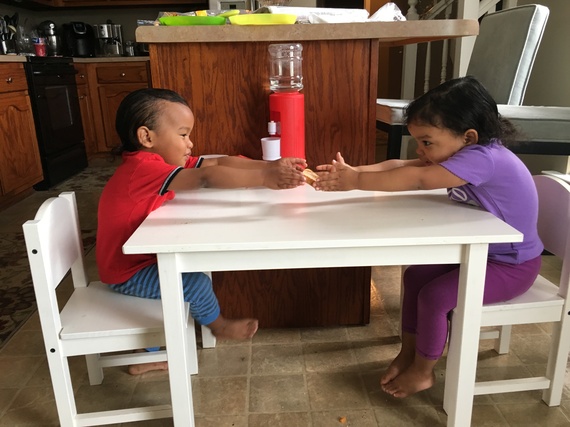 As a dad of twins (boy and girl), I always told myself that I would, to the best of my ability, treat my children equally and not succumb to gender stereotypes or conformity. They wear all colors, not just pink and blue, and they both play with all available toys, whether a baby doll or train.

What I wasn't ready for, however, is how differently society treats them, even at their early age of 3. Maybe it's the gay dad thing, the twin thing, the biracial kid thing, or a combination of all three, but people feel compelled to say something (mostly complimentary) to me and my family (without fail).

Don't get me wrong... Compliments are awesome -- when someone else notices something positive about you and points it out, it instantly makes you feel good.

Yet, I've observed that gender greatly affects the kinds of compliments my children receive. My daughter gets "hey pretty girl" or the "oh, you are so pretty" every time we are out and about, while my son gets the "charming" or "cool guy" comments.

And it seems that in general, it is most often women who compliment my daughter's appearance. Maybe it's because they were complimented on their looks as kids and so they pass it on to younger girls. What I do know is that our household doesn't discuss who is pretty or ugly or looks at all. It is something we just don't value.

So the next time you see my daughter (or other young girls) and want to say something, compliment her on one (or all!) of these other traits that deserve much more recognition:

Her Helpfulness
When we are at the grocery store, she is usually holding something light like bread that we are intending to purchase. She not only enjoys helping others, she often nominates herself to do so.

Her Leadership
When you see her pulling my arm because she wants to show me something in a store or when she politely tells her brother to wash his hands, she is practicing her great leadership skills... she's not bossy (thanks, Sheryl Sandberg).

Her Generosity
When we are at a restaurant, she usually gives her twin brother her bread, because she knows how much her brother loves bread (and that he is a very picky eater).

Her Friendliness
When we are ANYWHERE, she has no qualms about going up to anyone, smiling and saying, "Hello, how are you?" She loves people and she loves to make new friends.

Her Bravery
When she is at the playground, she goes on the highest slide and swings as high as she can, just like the big kids do (to my chagrin). She has no fear (except for flies), and I love that about her.

Her Intelligence
My daughter is multilingual and a pretty good reader. She speaks German to me, French to her other Papa, and probably English to you. She will randomly read words while we are just about anywhere. She is curious and yearns to acquire new and different knowledge all the time.

These examples are specific to my daughter, but I'm sure the compliments are true of many other little girls, too. There are so many other things that you can compliment girls on besides their looks. Boys get much more meaningful and diverse compliments, and it's time we start putting the same kind of thought into complimenting girls as well. We as adults, and especially parents, teach our children what to value. Let's value all aspects of our girls!

After all, if Beyoncé is right (and she ALWAYS is), then it's the girls who run the world, and they sure won't get there on their looks alone.

Anwar White is a single Dad of twins, Parenting Coach, and Founder of SmartKidParenting. He teaches busy parents how to maximize the potential of their children. Sign up for a FREE Initial Coaching Session here.

This piece was originally published on Mamalode.