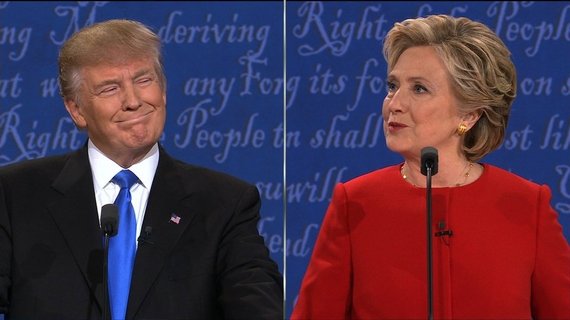 Here we are, just weeks before the 2016 election. An election that at times has looked more like a reality TV show or a fighting couple seeing me for counseling than it has a race for the highest office in the land. We've heard way too much about Trump's alleged sexual exploits, Clinton's private email server, "deplorables", being buddies with Vladimir Putin, and on, and on, and on.

I was struck by how at the last debate -- where the town hall format that usually engages the American people -- their voices were hardly heard. In fact, they were drowned out by even more talk about character issues. I get it, character matters -- but so does substance and the candidate's view on key issues and what they plan to do about them. Rather than hearing what really concerns voters -- taxes, security, healthcare, world peace, and prosperity -- we're hearing a steady stream of fodder better suited for late night talk shows and tabloids than anything else.

The net effect of hearing this has had a profound impact on the electorate. According to a recently released report by the American Psychological Association, 52% of people are stressed by this election. But you don't need a survey to know this. Open your ears at any café or bar, take note of water cooler conversations, and of course, family gatherings. Heck, I even overheard a heated discussion the other day at Trader Joe's.

In my office I'm also hearing stressed out clients tell me of their election woes and anxiety. Some patients get so riled up watching the cable news shows that they can't settle down at night and sleep. For others their relationships are on the rocks due to political differences, and still others are so disturbed by the mere thought of a President Trump or President Clinton that they are drinking or indulging in junk food to deal with their emotions.

So how to deal with this reality show/election? Here are my tips on how to make it through until after November 8.

1. Take action. If you don't like a candidate then instead of complaining or ranting online about him or her, get involved. Hand out fliers, make calls, and work at a polling station. Do something productive.

2. Set boundaries with people. You don't have to engage in political discussions with colleagues, friends, and relatives. These can be contentious. Feel okay simply saying "I prefer not to discuss politics" and leave it at that.

3. Stick with the facts. Rather than getting caught up in hyperbole and sensationalism be a good researcher and gather the facts about a candidate's position. It's easy to grab on to bits of information and run with it just because you dislike a candidate - but doing this will only instill and reinforce your fear and anxiety - and might even have a contagion effect.

4. Unplug. In the era of 24/7 news coverage and social media, it's hard to avoid an inflammatory tweet, a Facebook post suggesting a conspiracy theory, or a far left or right wing news source spewing propaganda. Pick a time to disconnect from all media (I'd suggest one hour before bed time) and up to that point pick one news source and stick with it. Schedule time to get caught up on the latest and don't check constantly. Catching up on the most recent news in the morning, evening, and night is more than adequate.

5. Vote. If you don't vote, then don't complain post-election. We live in a democracy. Exercise your right to vote and celebrate the liberties and freedoms you have.

6. Take a step back. Look at the big picture. Sure this is a contentious election and we're hearing more name calling than ever before, but keep things in perspective: there's a system in place for a smooth transfer of power and our Nation has been able to do this for over 200 years.

For more tips on living a healthy stress free life check out my book Be Fearless: Change Your Life in 28 Days.

Licensed psychotherapist, executive coach, columnist, and author of "Be Fearless: Change Your Life in 28 Days"