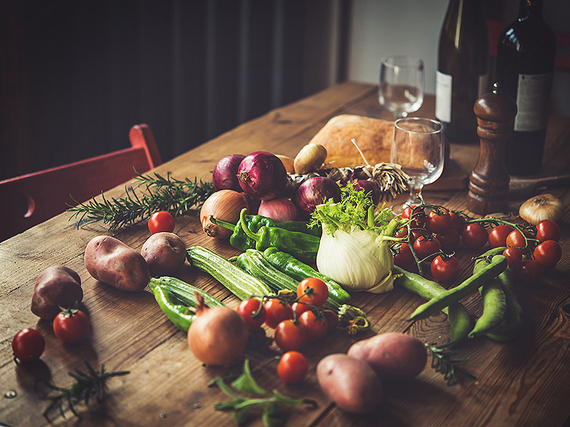 More and more people today are realizing that our food system is dysfunctional. Instead of nourishing us, it feeds us food that is not food; food that is damaging to the soil, air, water and climate; food that is decreasing the lifespans of our children and grandchildren; food for which we pay little up front but far, far too much down the road. A spate of books, documentaries and news articles highlighting the hidden costs of our industrial food system has brought this dysfunction into the light.

Just five years ago, the political power of the agricultural industry made reform seem out of reach. But the landscape is shifting. Here are six ways environmentalists, lawyers, chefs and food critics are joining forces to enact real change in our food system:

2. It's not just chefs, but consumers who are showing a new interest in sustainability. Consumers today want to know where their food comes from, and whether it was grown or raised in ways that treat workers, animals, and the land and water well. A recent survey from the International Food Information Council Foundation found that 41 percent of Americans considered sustainability in purchasing decisions--up from 35 percent in 2015. A bipartisan poll found that a large majority of voters, across party lines, supported government incentives encouraging farming practices that protected the environment. Seventy-five percent expressed concern for poorly paid food workers. And voters' top priority for food policy changes was to make healthy food more affordable.

3. The scientific committee that makes recommendations for the U.S. Dietary Guidelines--formulators of the erstwhile food pyramid and today's My Plate guidelines--recommended for the first time last year that American diets consider sustainability. (Politicians caved and the recommendation was cut from the final guidelines, but the point was made.)

4. After a fight spanning two decades, farmworkers, advocates, health providers and rural farmworker communities moved Washington to update the Agricultural Worker Protection Standard in 2015. Farmworkers have long been among the least protected from hazards in the fields and have one of the highest instances of chemical exposures among all U.S. workers. They and their families often live in communities in or near treated fields, where harmful pesticides can drift into their homes. Among other long-awaited improvements, the new rule bans children from handling pesticides in the fields and gives farmworkers the same whistle-blower protections as workers in other industries. Much depends on implementation, but the improved standard gives the 2.5 million men and women who harvest America's food hope that our agricultural system is changing for the better.

5. There's also a surge in legal action around food. Harvard law professor Richard Lazarus recently wrote an article entitled "Food Law Is the Next Great Area for Environmental Litigation." The courts are seeing more litigation that concerns food and environmental law. Earthjustice, for example, recently challenged the FDA for failing to conduct an environmental review when it approved genetically engineered salmon for food. Law schools are introducing food law programs and even food law degrees, creating a generation of lawyers ready to fight for a cleaner, more sustainable, more equitable food system.

6. Even big agricultural corporations are taking notice of consumer demand for greater transparency and healthier food. Cargill, the agri-giant that serves as a link between industrial farms and major food manufacturers like Nestle, is exploring the development of non-GMO supply chains. Conventional manufacturers, such as General Mills and Pepsi, have been acquiring or buying stakes in small, organic operations. There's some debate about whether this compromises organic principles or simply extends the reach of organic products, but it's clear that Big Ag has begun to recognize the value of organic food.

The food movement is about restoring value to our food and recognizing the vital impact our food system has not just on our health, but also on the viability of the natural systems that sustain us. As lawyers and food lovers, farmworkers and business executives, scientists and chefs, we can all work together to reform our food system and ensure that the food we produce supports healthy bodies and a healthy environment for communities all across America. Please become a part of this very important conversation--every voice counts.

Fertile Grounds is a blog series that examines the challenges and opportunities in ensuring access to healthy, sustainable and affordable food for all. We talk about the entire lifecycle of food--from seed selection and planting to consumption and disposal--because there is potential for improvement throughout. We're informed by the expertise of our many clients and allies and by Earthjustice's years of work to ban harmful pesticides, encourage sustainable farming methods, reduce pollution, support farmworker justice and promote a healthy relationship between farmers and communities.