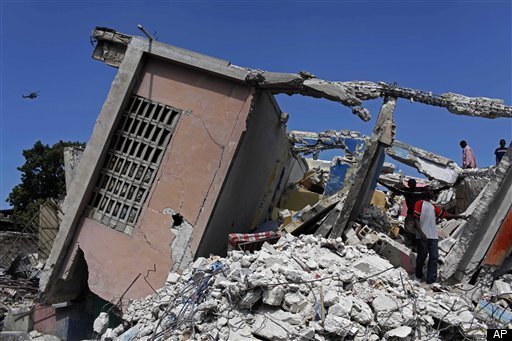 According to the US civil engineers, only 40% of homes in Port-au-Prince remain safe to live in after the earthquake. But having identified the buildings that need to go, the Ministry of Public Works now says it does not have the money or the equipment to knock them down.

Some hang over the street by several feet, leaning out where a corner has buckled. These look as if they would fall with a single swing of a hammer. Others seem perfectly intact, until you see the first story has folded under the rest like a cow's legs at rest. Each day, the web of practicable roads in the city shifts slightly as some routes are barred by resettling rubble.

"We single out private residences for demolition simply to point out that those houses put the population in danger, the minister of Public Works Jacques Gabriel told the press recently, "but that doesn't mean that we will come knock down all of those houses."

Haiti's poor concrete and lack of building codes became notorious after the earthquake. Negligent builders and landlords clearly share the blame for what nature wrought, but the earthquake also left many without the means to rebuild or even clear rubble quickly enough to prevent further loss of life.

Dump trucks now fetch up to $1000 per day in Port au Prince, before gasoline. If the government doesn't have the bulldozers and the population can't afford it, knocking down these buildings will fall to the rain and the wind and the sun, and the results will be tragic.