(AP) BANGKOK - A 603-pound (274-kilogram) woman believed to be the heaviest in Thailand left her apartment for the first time in three years Thursday with the help of Bangkok city hall and a forklift.

Neighbors of 40-year-old Umnuayporn Tongprapai contacted the Bangkok Metropolitan Authority when they learned she needed medical attention to remove a tumor in her right leg.

Seated on the floor of her modest third-floor apartment on the outskirts of Bangkok, Umnuayporn told reporters she could only walk a few feet (meters) on her own and was confined to her studio apartment where she ran a laundry service with the help of her two adopted sons.

"I've been living in this room and have not gone outside for three years," said Umnuayporn, whose weight is roughly the equivalent of a grand piano. "I can walk a little, just enough that I can go to bathroom. But I have to cling to my son the whole way."

Umnuayporn walked slowly to a trolley aided by her son. She was rolled down the corridor to a nearby empty apartment where workers had torn down an inner wall to allow her entry and demolished a section of the building's facade to take her outside.

As neighbors cheered on the pavement, Umnuayporn smiled and flashed a "V" for victory as she was lowered from the apartment by an elevator constructed outside. A forklift then transferred her to a waiting ambulance that took her to a Bangkok hospital.

"It's very likely that she is the heaviest person in the country," said Pijaya Nagavachara, director of the BMA General Hospital, which weighed her once she was admitted. 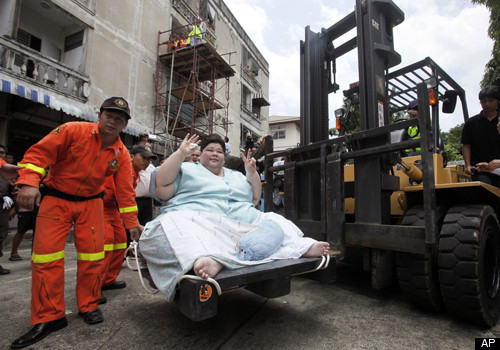 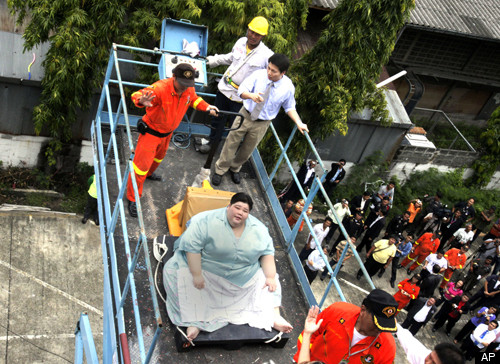 Her treatment will involve removing the tumor and reducing her weight, which doctors suspect may be due to thyroid problems, Pijaya said.

Once her medical treatment is finished, Umnuayporn says her dream is to go to the beach.