One of May's biggest underdog stories had a happy ending.

After a tough month of May, and a hard-fought finish in the 2015 Indianapolis 500, IndyCar driver Pippa Mann took a second checkered flag later that day when her #GetInvolved campaign completed -- with a surprise result.

The campaign, set to benefit breast cancer advocacy organization Susan G. Komen, had a goal of raising $50,000 in just 23 days after launch. The final tally topped the goal by more than 20 percent with more than $61,150 raised -- far exceeding expectations.

The donations came from more than 600 different donors from nine different countries. Not bad for a first time crowdfunder, who spent most of the month juggling the dual role of race driver and spokesperson.

"This month, managing a crowd-funding campaign for a cause alongside being a racing driver at times challenging, tiring, and at other times immensely rewarding," said Mann, whose 22nd place finish in the 2015 Indianapolis 500 involved her deftly avoiding most of the day's biggest accidents.

The campaign offered a wide variety of perks to get fans involved at just about any donation level. One of the more unique opportunities for donations was the "Turn The Cockpit Pink" initiative, where Mann placed names of honorees of those who either have fought, or are fighting cancer in the cockpit of the race car was the most shared, and most popular perk. It raised more than $8,000 and featured more 80 names.

Some other key highlights from the campaign: 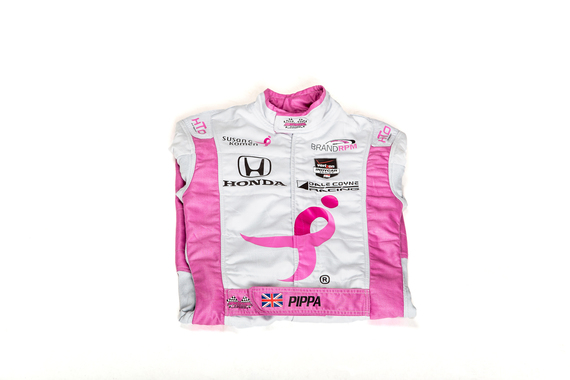 Pippa's Indy 500 race worn fire suit sold for $7,000 and was purchased by and individual involved with Racing for Cancer for in an effort to show support between anti-cancer charities.

But it wasn't always so obvious that the campaign would meet it's goal. "Halfway through the month and also halfway through the campaign, I wondered whether we would actually make our goal, and each day I set myself a target for where I wanted to try and push the total amount raised to that evening," Mann said. "To hit our goal before race day itself was incredible, and a weight off my shoulders going into the event, allowing me to shift more focus on being a racing river again for the biggest race of the year."

Social media factored highly in the spread of the campaign with $24,000 (nearly 40 percent) of the total raised coming from links shared on social media sites including Twitter and Facebook.

"It was incredible to see so many fans talking about our #GetInvolved campaign on Indiegogo on social media, and I am immensely grateful to many of the vendors who chose to get involved themselves via donating product, time or services to us," Mann said.

Komen Founder and Chair, Global Strategy, Nancy G. Brinker added, "Pippa's commitment to our mission to end breast cancer, both on and off the track, has made an iconic event like the Indianapolis 500 even more meaningful to individuals facing breast cancer around the globe. Her strength, determination, generosity and hard work inspire us daily, and have brought us closer to our finish line -- a world without breast cancer."

What's next for Pippa? First, rehab the ankle she injured in the practice crash. After that? Time will tell. Visit her website at Pippamann.com, or follow her on Twitter at @pippamann for updates!