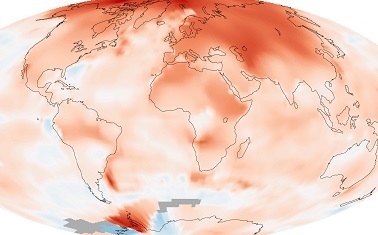 An interesting thing happened on the way to the partisan stalemate over climate and energy issues yesterday: 61 senators voted to acknowledge that greenhouse gas pollution is causing dangerous changes to our climate.

The conventional wisdom is that Congress can't even agree on the scientific facts about climate change, and under new leadership the situation will only get worse. But yesterday, on a pair of amendments to the Keystone pipeline bill, a supermajority of the Senate voted to flip that script.

The dueling amendments from Senators Brian Schatz, D-Hawaii, and John Hoeven, R-N.D., took different positions on the Keystone pipeline, but contained essentially the same language on climate science: (1) Climate change is real and (2) human activity contributes to it.

A lack of agreement on those basic and well-established facts has severely hampered the development of a constructive debate about climate solutions up until now. The discussion of how we can limit carbon pollution, move to a clean energy economy, and grow new jobs had often been met with shouts of "hoax."

But now that a large majority of the Senate is on record accepting the scientific reality of man-made climate change, we can move on to finding solutions. And with ideas from across the political spectrum, we're more likely to find the most effective and efficient solution to this challenge.

Of course, we shouldn't over-state the good news. Only half the Senate was willing to say human activities were a "significant" cause of climate change, and actual plans to limit carbon pollution are sure to be under assault in the days ahead.

But there's no question that we've moved into a new phase in the climate debate. We now know that at least 61 senators recognize the problem.

So we look forward to hearing proposals for constructive solutions from all senators who voted for these amendments yesterday. In other words, now that we agree climate change is real - what are we going to do about it?