Indeed, reality has overtaken fiction with the 63rd Internationale Filmfestspiele Berlin. Merging the "fight for assertion against merciless systems" with the first Weimar retrospective in the metropolis...

Gender-bending as an art form: Reinhold Schunzel's Viktor und Viktoria was released in 1933, the year the Nazi Party came to power.

... has created a new reality celebrating the biggest story of the 21st century, the rise of the feminine in equal partnership with the masculine.

The 63rd International Filmfestspiele Berlin delivered this marriage of the personal/universal with flashes of outright genius in films of remarkable emotional depth, variety and originality. 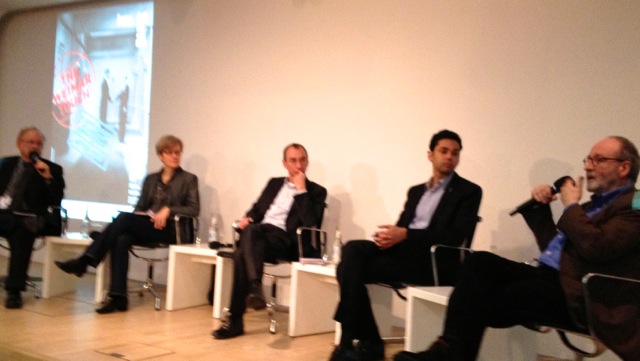 The Curatorial Board of The Weimar Touch (L-R: Laurence Kardish, Connie Betz, Rainer Rother, Rajendra Roy and Hans-Michael Bock) discussing the Weimar influence on filmmaking after 1933 in conjunction with Berlin's 2013 Theme Year.

The opening film, The Grandmaster, set the stage for the arising of a new archetype, battled out by the Franco-American onscreen pairing... 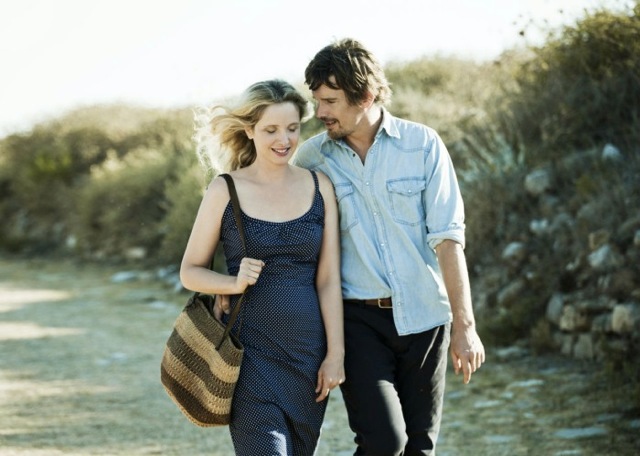 Before Midnight, the virtuoso close of the Julie Delpy-Ethan Hawke trilogy, triumphantly sourced the gender struggle into the universal archetypes characterized by the film's location -- Greece.

"Not even perfume?" she asks when her new bed partner at the end of the road insists on authenticity, a subdued rally against the hegemony of botox obsessed Hollywood.

The rise and fall of Berlin's prescient gender bending Weimar culture was encapsulated with exquisite off and on screen gender balance by Carter. Maladies, an ingenious follow-up to the multimedia artist's 2008 Erased James Franco, plays off the boundary smashing star's real-life struggle between image and substance. Revealing the patterns converging into a collective quantum leap, this visionary work of art is made all the more timely by the bold declaration of timelessness embedded in the film's highly articulated visual style.

The inspired pairing of the ever-present James Franco with Catherine Keener created memorable misfit characters that nonetheless managed to embody universal archetypes: a genuinely awakened woman (such a rarity in American cinema!) grounding the male spirit risking madness in a relentless search for feminine form. This eternal artistic pursuit was made all the more visual by way of Carter's maritime paintings of waves smashing into particles and spiral staircases in the installation/set serving as windows into a new subatomic reality: the wavicle! 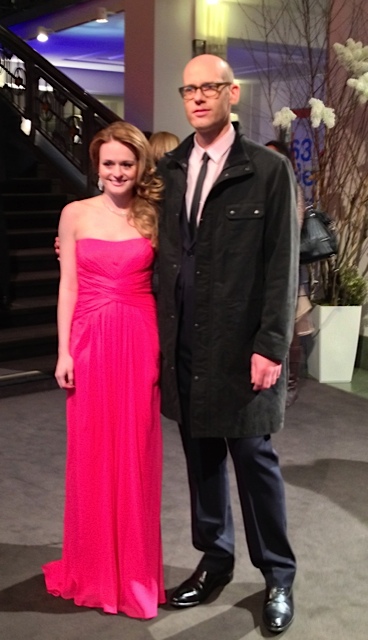 Maladies director Carter with his Executive Producer, Fallon Goodson, who played the sister of James (Franco) in Maladies -- an experiment in the Uncertainty Principle erasing boundaries between life and art by way of titling principal characters with the actor's first names.

With such ingenuity, Maladies placed the James Franco phenomenon into visionary perspective by giving form to the raison d'etre announced in a Lovelace quip: "You know those moments when life imitates art?"

As indicative of a collective surrender to a newly transparent feminine form revealing the struggle of integration, two prize winners even had yoga as plot development...

In the crowd pleasing Gloria, director Sebastian Lelio made a first time yoga class and encounter group (above) a key plot development for a mature Chilean woman's transformation against a socially emerging Chile...

The winner of the Berlinale's top prize, the Goldener Bar fur den Besten Film went to Pozitia Copilului (Child's Pose), named for the yoga position in a deleted scene. 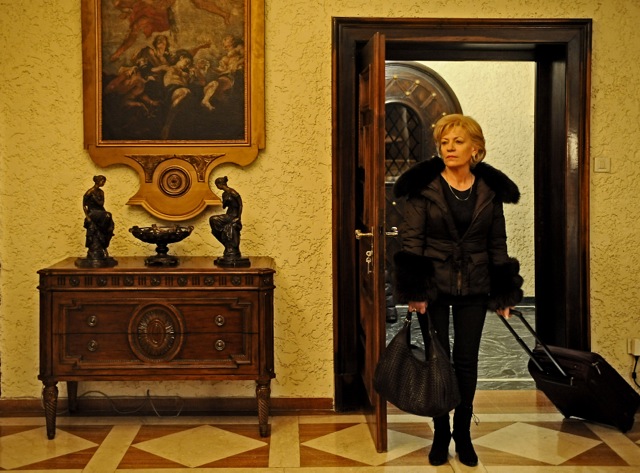 Luminita Gheorghiu in a command performance -- a mother's struggle to save her lethargic son exposes the dark side of maternal love along with the clash of classes in a corrupt Romanian society.

Child's Pose producer Ada Solomon, with her co-producer as well as screenwriter/director Calin Peter Netzer, expressed her gratitude at the abundance women's stories in this year's Berlinale in her acceptance speech. 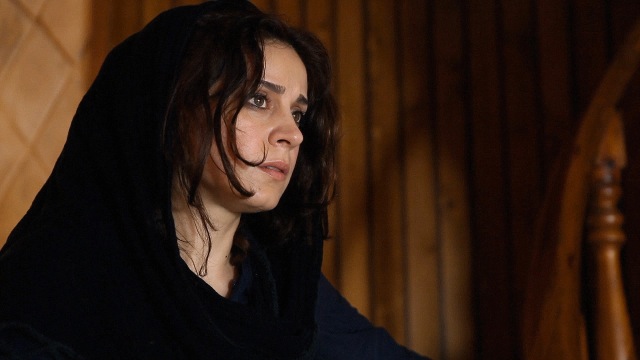 Maryam Moghadam giving form to the dark internal force of fate in Parde, a forbidden film infusing the onscreen narrative with off-screen power while propelling digital expression into new collaborative terrain of co-directors merging roles before and behind the camera.

A groundbreaking follow-up to the exploration of This is Not a Film, which chronicled the magical results of the inner gaze of a seasoned director in the age of social media, Parde erased boundaries on and off-screen.

In his Silver Bear winner Vic + Flo ont vu un ours (Vic + Flo Saw a Bear) French Canadian director Denis Cote introduced a new form of female film in which the literal traps along a road reflect the fate of the unbridled female.

Denis Cote brandishing the trophy that expands the ranks of notable Canadian directors.

Even when the sole female presence was ghostly, as in Prince Avalanche, the dominance of a feminine value of preservation and respect for nature's cycle was very much present in American films in competition at the 2013 Berlinale:

Prince Avalanche gave literal meaning to the road movie: the occupation of the two male characters, Emile Hirsch and Paul Rudd, was painting the center yellow lines on a road through a fire-ravaged forest coming back to life.

David Gordon Green, winner of the Silver Bear Best Director prize for Prince Avalanche, a film so organic that it effortlessly transformed from realism into the magical by way of incorporating a real story of a fire devastated female pilot.

The renewed respect for nature on the part of the masculine was the theme of director George Sluizer's 1993 Dark Blood, abandoned after the death of its star, River Phoenix, ten days before the end of the shoot.

When embodying the Uncertainty Principle becomes the necessity of a Phoenix resurrection: The voice of film's director interceding into his storytelling to read aloud missing scenes resonated in the film's deeply embedded consciousness of man's toxic control over nature begun with the splitting of the atom.


The astounding beauty of nature in its very unpredictability erupts through Dark Blood's exploration of the enigmatic attraction between the spellbinding Judy Davis and Phoenix, whose character's Native American identification has him attempting to restore magic in a USA desert contaminated by nuclear tests.

Taking a stand against the corporate domination of America, Promised Land used the contemporary debate about fracking to honor the indigenous Native American values of humans as caretakers for the land and honoring the "seven generations."

The avant garde search for balance takes a giant leap forward with Shane Carruth's Upstream Color. This lyrical, multi-layered film explores a bold new terrain for art integrating spirit/body and biology/physics in a non-linear/linear narrative of human transformation circling back to the theosophical origin of American literature connecting spirit and nature. A metamorphosis through sound reworks the language of the American classic Walden into a multi-layered Mobius strip where visceral/mental narrative merge into a new archetype.

In short, the 63rd Berlinale reflected Berlin doing what this inward gazing metropolis in perpetual struggle between the opposites does best...

"The Weimar Touch" will screen at the Museum of Modern Art in New York City from April 3 - May 6.

All photos in this posting, unless otherwise noted, copyright Berlinale and used with permission of the 63rd Internationale Filmfestspiele Berlin. Promised Land press conference photo credited to AP. The Weimar Touch panel and Red Carpet photo by LPS.

Lisa Paul Streitfeld is a philosopher based in Berlin and Ph.D. candidate at European Graduate School.