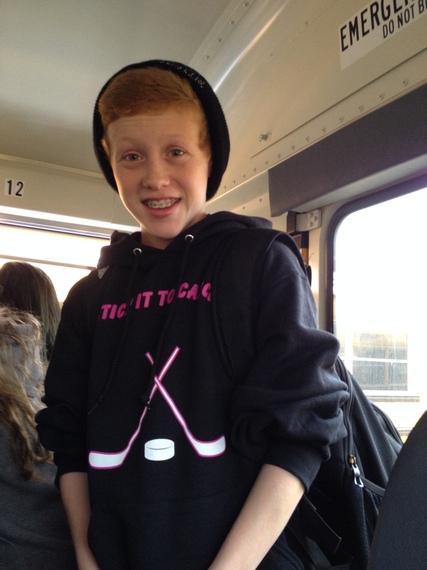 Sixth grader Drew Carlson saved a life. He called 911 for an overdose while on the school bus to Woodland Middle School in Illinois. He was upset that the student he was sitting with mentioned that he had just taken lots of pills and hoped that he would die in peace before they got to school. Drew did not dismiss these words but took them seriously enough to make the 911 call. The EMT's came and the student was taken directly to the hospital for emergency care and survived. Beginning to get the care needed, there was an emotional reunion of hugs and tears. His peer thanked Drew for saving his life.

Children get on the bus to go to school every day and they encounter much more than adults want to imagine. Parents expect their children to get to school safely. They expect bus drivers and teachers to keep their children safe and to have training and policies in place for emergencies. Drills are practiced and evaluated but what is rather vague in many trainings is when a child says something that just doesn't feel right. Do you take the child's words seriously or do you dismiss it? Drew did not hesitate to act but the bus driver and the school did.

Drew was afraid to leave his peer alone and started yelling to stop the bus, stop the bus, I am on the phone with 911. The driver did not pull over the bus. At this point, Drew was close to hysteria as he did understand the seriousness of the situation but he could not comprehend how an adult would not listen and would not act. The dispatcher instructed Drew to get out of his seat and hand his phone to the driver so that an adult could demand that the bus be stopped. EMT's were on the way and the bus needed to stay in an exact location. As the bus stopped, Drew was afraid that when he returned to his seat, his peer may be dead.

When Drew got to school, the school called his parents and they were all reassured that the situation would be addressed. School speak is what it is called. Schools wait until the situation passes, the rumors die down and stay quiet until another emergency occurs. Yet, this is a teachable moment for Woodland Middle School. It is a time to teach and applaud that 911 overdose was called. It is also a time for the school to teach about overdose, alcohol and drug use. It is a time to teach about compassion and caring for one another. It is also a time to teach adults to listen to children.

Some will argue that 11- and 12-year-olds are too young to start the conversation about overdose and drugs but they are not. They are living it every day; on the busses to school, on the play grounds and ball fields and even in their own homes. The children need to be taken seriously. They need parents and adults to listen to their hushed voices. If we do not listen closely and intently, children become silent. They learn that their voices do not matter, so they hide their problems from adults. Troubled adolescents do not disclose bullying, alcohol and drug use, or the pain they experience, they isolate themselves instead. It is easier for adults and children to keep the conversation light and not address the real issues underneath, so we talk about movies, video games, music and the latest trends as real problems hide in plain sight.

Schools and bus drivers need to be vigilant about the safety of their students; not just the physical safety but the emotional as well. Adults need to listen to children and not hesitate to act.

Red-headed Drew Carlson of Woodland Middle School saved a life. He saved a family from the loss of a child. He listened to the hushed voice of his peer and he did not hesitate to call 911.