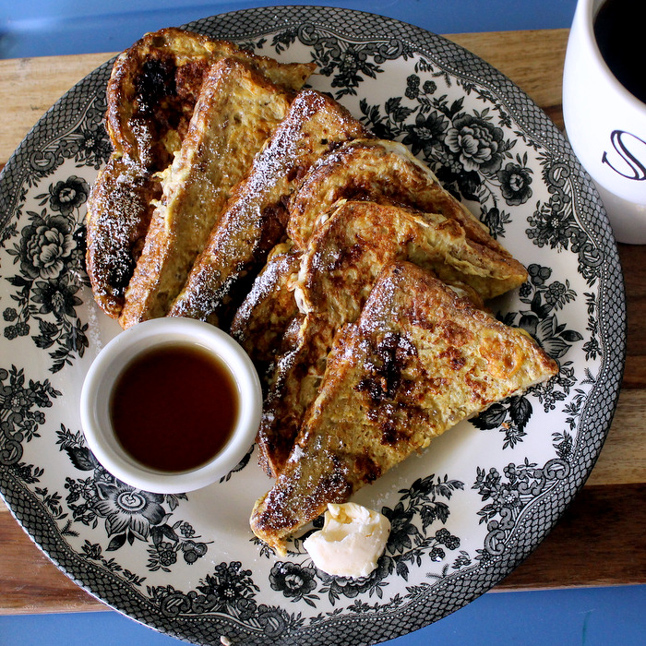 French toast: not as easy as you think (Credit: Spicy Sweet and Petite)

French toast is the champion of brunch. Nothing says "weekend" like tucking into what should be a dessert (it's basically fried bread pudding) and washing it down with something bubbly that you can cloak in orange juice and serve in a flute. But there's also a practical reason why it's uniquely a weekend dish: it requires multiple steps, considerable prep and cooking time, and adequate post-meal downtime to surrender to a carb and sugar-induced coma on the couch. We asked Bon Appetit's assistant food editor Alison Roman to work around our most common French toast mistakes. Her tips below.

Adding too much dairy and sugar to the custard
Don't go overboard with the milk. If there's too much, the egg in the mixture won't cook, meaning wet, soggy, bread. You want the French toast to be dry on the surface with slightly crisp edges. As for the sugar, if you're adding maple syrup, honey, or dusting the toast with powdered sugar on the plate, you don't need the custard to be too sweet.

Not mixing the custard thoroughly
You don't want pieces of egg white showing up on your perfectly browned slices. Make sure to whisk the custard until the milk, eggs and spices are well combined.

Not choosing the right bread
French toast is like bread pudding -- it soaks up a custard for a creamy texture on the inside, and a slightly crunchy texture on the outside. If the bread is too thin, it will be too flimsy to hold together when dipped in the custard. If it's too thick, it will never cook to the center. The ideal thickness for a slice of French toast is 3/4-1-inch thick. And make sure to pick a kind of bread that's both spongy and sturdy enough not to fall apart during cooking. Brioche or challah -- or even a croissant -- is ideal, which is why you see them on brunch menus so often.

Under-soaking the bread
Lots of home cooks quickly dip each side of the bread in the custard before throwing it in the pan. The bread has to soak in the egg mixture -- you want it to penetrate the bread for a soft, creamy center. Soak the slices for at least a minute per side.

Using too much heat or not enough
French toast is not a steak -- you don't want to scorch the surface. Since there's sugar in the egg mixture (the custard), it will caramelize and burn quickly. Plus, the inside won't cook, and you'll be left with a burnt yet soggy piece of French toast. Conversely, if you cook it on too low a temperature, the bread will dry out and you won't have that nice, soft center that makes French toast so decadent. Cook three to four minutes per side on medium to medium-high heat.

Not preheating the pan
If the pan isn't hot enough when you put your first slice in, the custard spreads out, forming a foot on the bottom of the French toast. When the pan is hot enough, the batter won't have time to seep -- the eggs will start cooking as soon as they hit it.

Only using butter
Give the pan a light coating of nonstick spray, then add the butter. This will help prevent the butter from burning. And make sure to wipe out the pan after every batch, then use a fresh combination of cooking spray and butter. Otherwise, the butter will burn and little black bits will stick to the next batch of French toast.

Now go forth and make brunch!

Get the recipe: Croissant French Toast