If you choose to breastfeed your baby, there are going to be times when this very intimate and tender act happens in front of other people. Even though I knew I wanted to breastfeed my daughter, I was not prepared for how I would feel when it inevitably took place in public. There is so much talk about how uncomfortable it makes people to witness you breastfeeding -- but guess what, world? It was NOT that natural for me to pull out my teat in front of strangers either! How about some empathy for the fact that moms can feel just as shy as you do, but their baby has a different agenda -- staying alive?

Here are the most common complaints I have heard about public breastfeeding, and my rationale as to why I don't think they are fair.

1. Do it on your own time. People are often really upset when they see a mother breastfeeding in a circumstance they believe could have been avoided -- for example, at a restaurant. They expect that she should have planned better, or breastfed on her own time. This logic is about as reasonable as someone kidnapping you from your house, bringing you to a foreign place where everyone is eating, but then when the food comes for your captor you don't get any because you should have eaten before.

Babies are hungry! You can't always anticipate when they will want to eat, especially when they are young and going through growth spurts. One of the most common misconceptions of breastfeeding is how often it actually ends up happening. I was certainly not prepared to be a 24-hour diner that was servicing my main customer almost every hour. All a newborn does is sleep, eat, pee, poop, eat, open eyes, eat, pee, poop, and eat some more. Although I envy the speed of their metabolism, this makes it impossible to "plan" and only breastfeed when you are alone.

2. Fine, breastfeed if you must -- but do it modestly. I know they make these fabrics you can hang over your neck to breastfeed discreetly -- but why do moms have to dress like Batman and sweep their baby under a cape of shame? I had one of those, and my daughter hated it. It was hot under there! Would you ever grab a burger, and then go eat it inside a sauna? She also couldn't see me because she was blanketed in darkness. Why do moms have to put their babies in solitary confinement just so people don't see the top half of a breast?

3. I just don't want to see that. News alert! I don't want to show you that! I am just trying to mind my business. Why can't you do the same? If someone were to pick their nose or dig in deep for a wedgie in front of you, what would you do? Turn your eyes away! Same thinking applies here.

4. It is sexual. You know what is sexual? Ninety percent of every marketing campaign on planet Earth. We sell cars, beer, cologne, shampoo, movies, music, TV, banks, lawnmowers, and watches with breasts. You can't look up and not see breasts as a part of commerce. Compare that to the amount of times you see an actual women breastfeeding in front of you, and I bet the ratio is about 6 gagilliion to 1.

5. Why are you trying to get attention? If I were trying to get attention I would stand on a table and sing Broadway show tunes while performing the Can-Can with no underwear just before I conducted a power point presentation on the G-spot. Never once did I breastfeed my baby to try and get people to look at me. It was so she would stop crying.

6. Why don't you pump and use a bottle? My mom bought me an electric breast pump and the directions were about as clear as putting together a rocket ship from Ikea. I was too tired and too overwhelmed to figure out anything beyond changing my clothes at least every three days. By the time I actually had my head straight, my baby would rather eat from the udder of a cow than a bottle, and it was an impossible effort.

7. Can't you go somewhere else? Sometimes yes, and maybe I will. If there is a nice tree to sit under, a quiet bench, or a bed of pussy willows -- sure! But no mom should go into a public bathroom and sit amidst fecal matter just so you don't have to observe her sustaining a life. 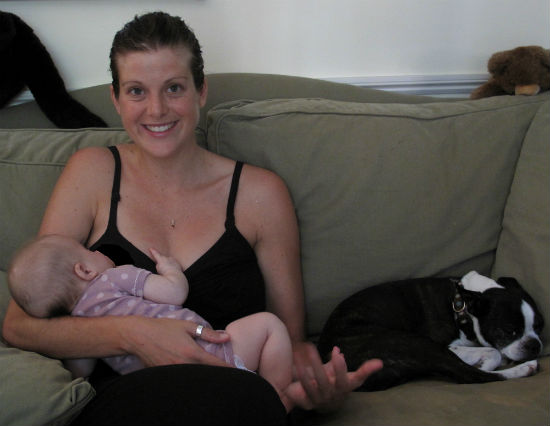