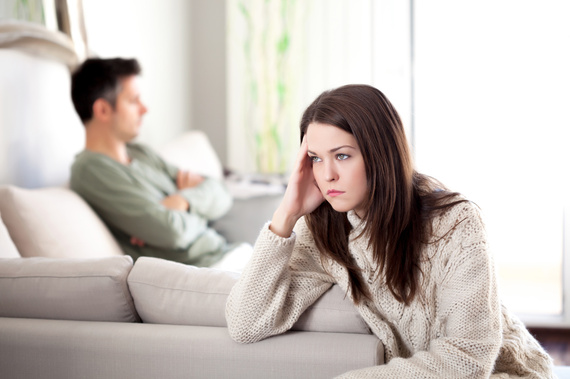 Communicate through texting. Most of us are guilty of attempting to have a 'too long' conversation via text. However, problems will arise if this is the main way you communicate. So much communication is lost through texting because there is no element of body language - which is essential for effective communication and connection. Problems inherent in doing this are magnified when either one or both have been drinking - which many of the couples I see, do. Drinking not only decreases our inhibitions and ability to stay rational but increases our impairment with unclear thinking and poor decisions. It's just a bad cocktail. Texts are seldom deleted and then brought up again and again because they are hurtful.

Lack of common courtesy. Whether it be when you are running late because of a work commitment or transportation is thwarted (bad traffic, delayed trains) people don't take the 10 seconds it would take to communicate this to their partner/spouse. Just doing this would quickly diffuse a person's anger - and fear. A lack of common courtesy is also happens when one person has been asked to do something and they don't confer with their partner/spouse first. They continue to make unilateral decisions. Many people say they feel like they are asking permission and have the attitude that they 'would rather ask for forgiveness than permission.' But this is simply not true. By including them in your plans, you are creating a stronger bond and reinforcing the trust and 'we are a team' attitude.

Speak negatively of your partner or spouse. I have been in the company of others when one person speaks ill of their partner. Boy, that is uncomfortable, isn't it? They do this in a 'funny' way, but it's actually very hurtful to the other person. Although we all have those things that drive us nuts about our partner/spouse, saying those things in the company of others hurts both the person and the relationship and also reflects poorly on you.

They don't ignore the small slights. There are small slights that happen frequently in relationships. But does everything really have to be an issue? Why is it so difficult to look past some of the small slights in life and focus on the bigger picture, the positives of that person? Would you treat your good friend in the same fashion? I doubt it. However, if there is something that really is a trigger for you, why not take the time and have an honest conversation? This would, no doubt, leave both of you feeling better about your relationship.

Bring up the past. People do this often and typically end up hurting their relationship. All this really shows is 1.) they still are unable to get past an issue and thus they need to talk about it more or 2.) they are still angry or 3) they know that by bringing up the past will hurt their partner and because they haven't resolved the issue in their own mind and feel justified. Either way, bringing up the past never works unless it is done with care, compassion and a real need to understand something so that you can put it behind you.

Distraction rules. Somewhere along the line, the TV, our phones, iPads, computers, and social media has morphed into being something way more important than being present with our partner/spouse - especially when they are attempting to have a conversation with you. Why is that? Doing that speaks volumes and implies these things are more important and significant that you are.

Not thanking your partner. When your partner or spouse does something - things like taking out the trash, cooking dinner, picking up your dry cleaning, running an errand - many people just don't say thank you. By not doing that, you start to take both your partner/spouse and the relationship for granted. When I offer that to couples, one person is often defensive of that and asks why they have to thank their partner for doing something that maybe they both do or is just part of life. It really is about acknowledging your partner; it is important to be grateful, attentive, and present. It's about the team effort.

I have found that these are some of the things that really can break a relationship and undermine the trust, safety, and security that a relationship needs to survive.

Are you guilty of any of these? If so, what will you do to change them? The health of your relationship depends on it.