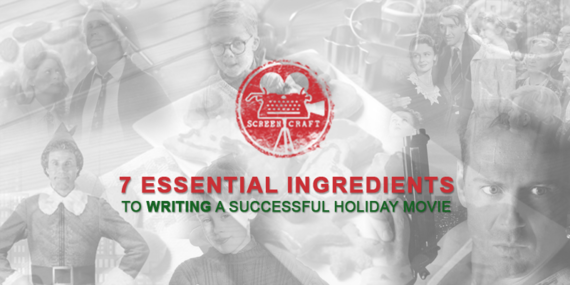 The Holiday movie genre is one of the most consistent box office earners in the history of the film industry. Since 1960, Holiday movies have earned well over two billion dollars (not adjusted for inflation).

What's even more interesting is the phenomenon that we see each and every year. Television networks play those movies endlessly from Thanksgiving through the New Year. Classics like It's a Wonderful Life and A Christmas Story often have 24-hour runs. The more contemporary classics continue to grow in stature with the likes Christmas Vacation, Elf, The Santa Clause movies, Home Alone, Scrooged, and many more.

The Hallmark and Lifetime Channels have made a successful ratings business out of producing original Christmas-themed telemovies.

Audiences, each and every year, and even for those that don't celebrate the Christmas holiday, sit down with their friends and family to watch movies they've seen over and over and over again.

So what is it about these movies that make people come back for more?

ScreenCraft has explored the various different types of holiday movies in the past with Writing a Holiday Film, but let’s delve deeper into this genre.

So as screenwriters sit down to write that next holiday classic, let's explore the seven essential ingredients that are needed.

What drives the success of so many of these movies is allowing the audience to be children again. A majority of those that show up at the movie theaters and tune in each holiday season on TV are adults. We introduce those films to our children and pass that tradition down.

We've long grown past those days of making a list for Santa, praying for snow, and the utter and sometimes overbearing anticipation of Christmas morning.

With holiday movies, we get to experience that through the eyes of Ralphie from A Christmas Story. We're brought back to those days of our youth with the excitement of snow days, snow forts, snow fights, seeing Santa in the mall, staring up at the endless Christmas lights in the city and suburbs, and getting that one special gift that was at the top of our lists -- the one we’ve been dreaming about getting the whole year.

The nostalgia is what drives most of these movies. That's what screenwriters and filmmakers need to tap into. Those universal themes and memories we've all experienced as children. Those small details that are embedded in our memories.

Believe it or not, there was a time when most of us believed in a fat, jolly, white-bearded man entering our houses through the fireplace -- or some other magical way for those that didn't have one -- and leaving behind a belly of presents after enjoying the milk and cookies that we left behind on Christmas Eve. We believe that somehow this single being could serve the children of Christmas worldwide in a single night. The magic of that truth (wink wink) has escaped us and we're blind to it.

As adults, we live in a cynical world. We live in a world of practicality, deadlines, appointments, and bills.

The movies that focus on the magic of Christmas and Santa -- The Santa Clause, Miracle of 34th Street, The Polar Express, and so on -- tap into a part of our lives that we've long let go.

And when we watch them with our children, that magic is reborn as we pass that feeling of wonder onto them.

For adult audiences especially, the magic of the holidays can stay alive as long as screenwriters and filmmakers are willing to explore it.

For most, the holidays are about family. And for those unfortunate enough to not be able to be with their family during that season, there's that longing to do so. That's what so many holiday movies explore so well.

The essence of family taps into the emotions of the audience, especially when estrangement and geographical separation is explored. Kevin longing for his family in Home Alone is something that pulls all of our heartstrings. The estrangement between the old man and his family living next door to Kevin in that same movie is something so many can unfortunately relate with.

The dysfunction of the family in The Ref leads to both drama and comedy that we've all experienced at one time or another, using those characters as a way to say what we'd all like to say every now and then, but probably wisely don't.

The element of family is another universal theme that spans through all generations.

What would a holiday movie be without Christmas lights and decorations?

What would a holiday movie be without snow (yes, we know there doesn't always have to be snow)?

And such atmosphere can even take an otherwise un-holiday movie to the top of many Holiday Movie lists. Die Hard, Lethal Weapon, Trading Places, Batman Returns, Kiss Kiss Bang Bang, and Gremlins? All Christmas movies.

On that note, what would a holiday movie be without Christmas trees?

Most critics and screenwriters scoff at tropes and clichés. They often feel that Hollywood cinema is worse off because of them. Nothing could be further from the truth.

Audiences love what is familiar. The test of a great screenwriter is giving them that while offering something new at the same time. For holiday movies, tropes and clichés are necessary -- the crazy grandparent, the weird uncle, the rebellious teenager, the naughty kid, and the career-focused parent.

Those and more are all necessary components of holiday movies because the audiences can identify with them. The great screenwriters can turn those tropes and clichés on their head or at least offer a subtle spin.

The holiday season is a season of hope. Audiences watch these movies over and over and over again because why? We all can use a little more hope in our lives.

When was the last holiday movie that you saw void of hope? Never. What great holiday movies have ended on a sour note with no happy ending? None.

Even the holiday dramas like Home for the Holidays offer us hope in the end. Home Alone explores the idea of hope so well with Kevin's mom on a seemingly hopeless journey to travel across the country to get back to her boy.

A holiday screenplay without hope is like a Christmas tree without presents under it.

One of the most common ingredients to holiday movies is redemption.

There have been roughly 23 direct adaptations of A Christmas Carol, which features the journey of redemption of Ebenezer Scrooge. There have been dozens more inspired by that story.

There have been many incarnations of It's a Wonderful Life, which told the harrowing tale of George Bailey's redemption after falling from grace in the eyes of his career, his town, his wife, and his children.

The need for redemption means that there is major conflict that the character(s) need to overcome. Conflict is the root of all great storytelling, so needless to say, the best holiday movies have redemption stories. Kevin needed redemption in Home Alone after wishing his family away. So did the Grinch, Scott in The Santa Clause, Jack in The Nightmare Before Christmas, Clark in Christmas Vacation, and even Scrooge McDuck in Mickey's Christmas Carol.

These are the seven essential ingredients to conjure great holiday movies. Like any good recipe, such ingredients can be mixed in with many different measurements. A sprinkle of magic here, a cup of hope there, a teaspoon of redemption, a pinch of atmosphere, etc.

While Christmas is the holiday that clearly dominates the genre, it's really about the holiday season as a whole that makes audiences of all walks of life and beliefs enjoy these movies.

So Happy Holidays! And to those screenwriters out there, if you've got the next great holiday movie script, consider entering it into ScreenCraft's Family-friendly Contest.

Beyond that, knowing that the holiday genre is one of the most consistent audience-pleasers and time and time again proves to have more legs and staying power than any other genre, consider taking these ingredients and making your own recipe for the perfect holiday movie -- be it a Christmas or Hanukkah, or a combination of the two as we get with The Night Before.