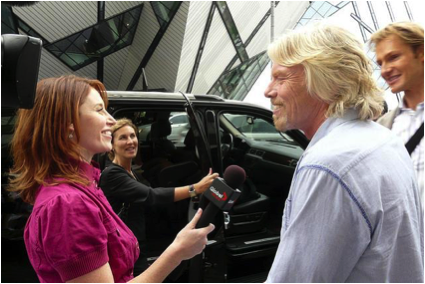 Back in March, Forbes released a list that profiled all the billionaires in the world. And while it didn't get a ton of press when it first came out, I did a little digging and found seven really interesting facts as I love learning about what makes successful people stand out from the crowd like this young man who made $2 million in just 3 years.

Here are some interesting billionaire tidbits:

I don't know about you, but there are some things that really surprised me about these facts...

We hear a lot of doom and gloom in the news about how bad the economy is and how hard it is for people to get ahead. But all you have to do is look at this list and see that this isn't the case for everybody. There are plenty of people who are still making money - and not just by a small margin. These billionaires actually increased their net worth by nearly $500 million dollars in the last year alone.

Billionaires are younger than ever

It also surprised me to see that these billionaires aren't all Warren Buffett age tycoons. A record number of the world's billionaires are less than 40 years, and the youngest is just 24. Can you even imagine having access to that kind of wealth at such a young age??

Billionaires are, for the most part, self-made

This was probably the most interesting fact on the list to me. Nearly 1,200 of the world's billionaires earned their spots on the list on their own. They didn't have mommy or daddy passing down a big-bucks inheritance - they took chances on themselves and capitalized on great opportunities when they saw them.

I share this list of billionaire facts with you for one simple reason: to give you the motivation you need to succeed.

As a stock trading teacher, I hear from so many would-be students who are totally down on themselves. They're hopeless about the future. And they're that way because they assume that the kinds of people that get ranked on this list had some special advantage they don't.

Maybe it was that big-bucks inheritance I mentioned earlier, but maybe it was something as simple as the right connection at the right time. Maybe the people on this list are just naturally smarter or inherently more business savvy. Many of the people who get in touch with me assume that they'll never get ahead because they don't have these advantages, but if you want the real truth, they won't get ahead because of their limited thinking.

There's nothing special about me. I grew up in a normal Connecticut neighborhood (not even the nice part of Connecticut), with normal parents who had no connection to the stock market. I'm not that smart, and - although it surprises some people - I'm not even really that good at math.

But despite all that, I've still managed to turn a few thousand dollars of bar mitzvah money into a few million dollars of penny stock trading profits. And it wasn't connections or a wealthy upbringing that helped me do it - it was my ability to work hard and to capitalize on an opportunity I saw that others were ignoring.

That's just my story, though... If you want another, take Evan Spiegel of Snapchat - the youngest billionaire found on Forbes' list.

Evan was raised in California as the son of two lawyers. Sure, that's a comfortable upbringing, but it's pretty far from a guarantee of billionaire status. Evan was a student at Stanford, where he was studying product design, when he came up with the idea for Snapchat as a class product. At that point, all he was looking to do was create an app that better met the style of communication he and his friends preferred:

"It seems odd that at the beginning of the Internet everyone decided everything should stick around forever. I think our application makes communication a lot more human and natural."

Basically, Evan saw a problem, came up with a solution to fix it and made bank when his idea took hold. That idea is now valued at $19 billion dollars.

Ultimately, there's nothing that special about people like me and Evan - except for our willingness to take action. Evan acted on his idea for a revolutionary new messaging app. He could have just let it go as a great idea that was never realized, but instead, he brought his vision to life.

When I first noticed how much opportunity there was in the penny stock market, since most institutional investors tend to ignore them, I could have just noted it and moved on. It sure would have been a lot less work than the hours I spent studying stock charts and a lot less painful than the major losses I took as I perfected my trading patterns and strategies.

But I didn't. Evan didn't. And neither did any of the billionaires on Forbes' list. All of us found our opportunity and went after it - no matter what the cost.

If we had let ourselves get bogged down by negative thinking - the kind that tells you your dreams aren't realistic or possible - we wouldn't be where we are today. And I've gotta tell you, the perks of this lifestyle are more than worth the challenge to get here!

I want you to enjoy this same lifestyle, but you can't have it if you keep holding on to your negative patterns of thinking. If you're constantly telling yourself that you'll never get ahead, or that the people that have made have some special advantage you don't, you're going to create a self-fulfilling prophecy. You're not going to get rich simply because you don't think you can.

I'm not saying that thinking positively is going to make you rich automatically. If all it took to get rich was to think positively, there'd be a lot fewer poor people out there.

But what I am saying is that positive thinking opens you up to opportunities and gives you the willingness to capitalize on them. When you believe that you can be rich, you find ways to make that happen - whether through penny stock trading (like I teach), entrepreneurship or some other mechanism.

Start thinking positive today. Let this list of billionaire facts inspire you, and use the fact that so many of the list's members have built their own fortunes to motivate you to grow your own. It's absolutely possible - you just have to be willing to change your mindset and work hard.