We've already shown you the world's scariest places and America's spookiest hotels, but if you're still looking for more Halloween-themed thrills, you won't have to search far: You can find festive celebrations in just about any town across the country. From coffin racing in Manitou Springs, Colo., to a witch-themed ball in Salem, Mass., U.S. News Travel found seven of the spookiest Halloween festivities happening around the USA. 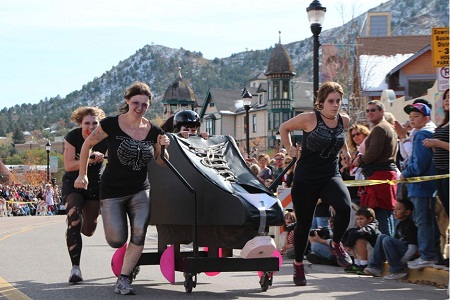 Nothing screams Halloween like coffin racing. A Manitou Springs, Colo., tradition since 1994, the Emma Crawford Festival honors one of the town's most famous residents. Emma Crawford came to Manitou Springs in 1889 in the hopes that the area's sacred and healing mineral springs would cure her tuberculosis. Unfortunately, the springs weren't the white plague elixir she had hoped for. To honor her dying wish, her fiance and 11 other men illegally carried her body up the 7,200-foot slope to the top of Red Mountain, taking two days to scale the peak.

But Crawford's story doesn't end there. In 1912, her grave was moved to the southern slope to make way for railway construction, thereby making her body more exposed to the peak's stormy weather. Her coffin was eventually unearthed in 1929, causing her remains to slide down the side of the mountain, with only her casket handles, a nameplate and several bones recovered. Though Crawford was later laid to rest in Manitou Springs Cemetery, according to town legend, she forever haunts Red Mountain. As a quirky nod to her everlasting spirit, the town hosts its annual Emma Crawford Festival in the streets of downtown Manitou Springs. Racing teams consist of four runners and one "Emma" to sit inside the "coffin." Trophies are awarded to the three fastest teams and the best-looking Emma. Come watch the inventively-costumed groups race on Oct. 26 from noon to 3 p.m., and then stick around for a "Ghost Stories of Old Manitou" walking tour, starting at 5:30 p.m. Tour tickets for adults cost $10; children pay $5. And if you'd like to enter your team into the coffin race, you'll have to pay a $50 registration fee.

The Salem witch trials took place more than three centuries ago, but the city's fascination with its sinister past lives on. Though you can find kitschy, witch-themed activities and attractions all year long (like the Salem Witch Museum and the Salem Witch Village), the city kicks the spooky spirit into overdrive just before Halloween. Salem offers a Haunted Happenings calendar of events throughout the month of October with a full line-up of activities, including parades, theater performances and festivals, culminating in the Official Salem Witches' Halloween Ball. Visit on Oct. 25 at 7:30 p.m., and you can head to the Hawthorne Hotel for music, dancing, psychic readings and plenty of rituals to appease the souls of the spiritual world (don't worry, the Sanderson Sisters won't put a spell on you). Along with the music and dancing, the $150 ticket grants you the chance to win the costume competition, which offers a cash prize of $1,000. If you're not in the mood to don a costume, you can always take a "Hocus Pocus"-inspired road trip throughout Salem and visit some of the film's most iconic sites, like Old Burial Hill Cemetery. Keep in mind that despite the government shutdown, all of the city's museums, attractions and tours are open to visitors. 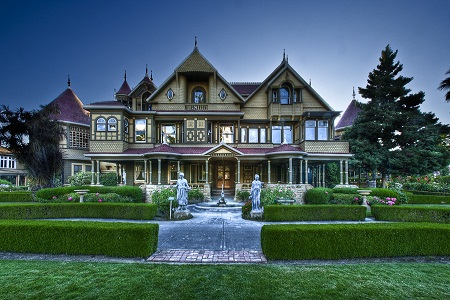 Full of secret passageways and strange structural elements, the Winchester Mystery House is an eccentric, yet beautiful labyrinth said to be haunted by its original resident, Sarah Winchester. Following the death of her infant daughter and husband in the late 1800s, Winchester decided to funnel her vast fortune (her husband's family manufactured the Winchester repeating rifle, or "The Gun That Won The West") into building the bizarre mansion that exists today. Among the strange architectural details Winchester demanded are a séance room, a staircase that descends seven steps and then rises 11 steps and design motifs that incorporate the number 13. Legend has it Winchester constructed the house to confuse evil spirits who may have died as a result of the Winchester rifle. But pragmatists believe that she built such an eerie estate because she had no other use for her wealth. Whatever the reason, the house's mystifying design makes it all the more spooky to navigate, especially during Halloween. Throughout all of October you can take a special 65-minute night tour of the house, with only a souvenir flashlight and the moon to guide you through the mansion's twists and turns. Tours cost $48 per person; however the estate also offers a more budget-friendly mystery maze. Maze tickets range from $5 to $12.

With a nickname like the "Grey Ghost," it comes as no surprise that the Queen Mary has witnessed an eerie past. Along with the ghost of a sailor who perished in the engine room, lingering spirits of the children who drowned in the ship's pool are also believed to haunt the vessel. You can take a Ghosts & Legends tour on the Queen Mary any time, but the ship's annual Halloween event -- Dark Harbor -- ups the fright factor. This year, the Captain and his chilling cast of undead spirits will be joined by carnival spectacles and new monsters led by a sinister ringmaster. Needless to say, if you battle a fear of clowns, this "circus of the dead" is sure to intensify your coulrophobia. Along with six mazes, a zipline and a high-speed ferris wheel, the ship also features live music from local bands and DJs. Dark Harbor takes place every October weekend, from 7 p.m. to midnight. Tickets are $24 in advance and $29 at the door. 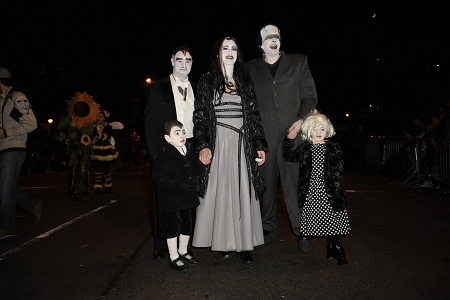 Hurricane Sandy may have shut down the annual festival last year, but the Village Halloween Parade is ready to take over Sixth Avenue once more. This year, the parade will be commemorating its 40th year (and its resurrection from last year's cancellation) with a "Revival" theme. The event, which debuted as a small Greenwich Village neighborhood walk has now become one of the biggest Halloween celebrations in the world, with an estimated 60,000 participants and 2 million spectators. Not only is the parade a beloved Halloween fete, it's also an iconic part of New York City history. In 1994, former New York City Mayor Rudy Giuliani called the Village Halloween Parade "a true cultural treasure," and in 2001 the parade was one of the first major city events to resume after the devastation of 9/11. Along with thousands of costumed attendees and giant puppets, more than 50 bands and dancers will march up Sixth Avenue from Spring Street to 16th Street starting at 7 p.m. on Oct. 31. Though participation is free (anyone and everyone in a costume is welcome to walk in the parade), last year's abrupt cancellation caused the parade to lose 50 percent of its operating budget. Organizers are asking for donations through a Kickstarter campaign to ensure the celebration continues.

Rivaling New York City's Village Halloween Parade in size and spectacle, the West Hollywood Halloween Costume Carnaval invites hordes of revelers to descend on Santa Monica Boulevard. A Halloween staple since 1987, the free Carnaval is Los Angeles' second largest annual event, with about 500,000 attendees marching for the mile-long stretch along Santa Monica Boulevard from North Doheny Drive to La Cienega Boulevard. Along with the swarm of inventively dressed parade-goers, the event also features six stages, 50 performers and plenty of local food trucks. Aside from the entertainment, there's also a costume contest and the crowning of an honorary "Queen of the Carnival" (last year's title went to Rihanna). This year's parade, which will follow the "One Noir Night in West Hollywood" theme, will take place on Oct. 31 from 6 to 11 p.m. 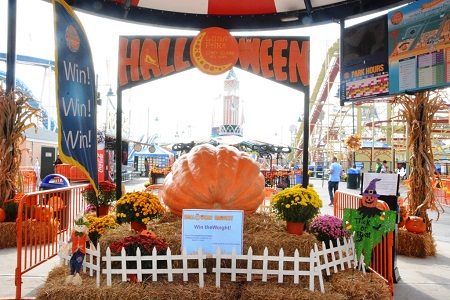 If you're looking for a less frightening, more family-friendly Halloween celebration, consider visiting Coney Island's Luna Park. Every weekend in October, the amusement park hosts a Halloween Harvest, with free activities like pumpkin painting, trick-or-treating and scavenger hunts. And don't forget to guess the weight of the giant pumpkin at the park's entrance -- you could win $1,000 in cash if your prediction is correct. The winner will be revealed on Oct. 26, when Food Network personality Marc Maniac and his team from Maniac Pumpkin Carvers will chisel the colossal orange gourd into a work of Halloween art. You can join in on the fun with the family pumpkin carving contest, or if you'd rather dig into a sweet treat, partake in the pie eating competition. Luna Park welcomes visitors every Saturday and Sunday in October from noon to 8 p.m. Find a full list of events and activity prices on Luna Park's Halloween Harvest website.