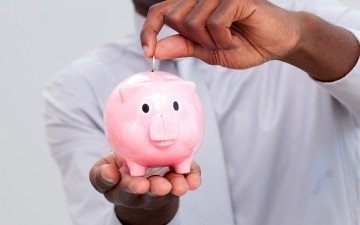 By Kara I. Stevens

In other words, even with the grimmest of financial forecasts coming down hard you on, you can still make it to the land of milk and honey by changing some of your habits and thinking.

If you are willing to shift your thinking about money and life, you have the chance of becoming a self-made millionaire.

The Wealthy Live That #FabulousNFrugalLife. One of the key habits of the self-made millionaire is that they track their spending. Every penny has a position in their multi-million dollar empire. In other words, they keep a budget and are able to differentiate between a want and a need. If you need a budget starter tip, try the 50-30-20 rule. Use 50% of your income for your needs, 30% for your wants, and 20% for your savings and investing. If you want to jumpstart your journey to wealth, flip those last two percentages: save and invest 30% of your income and use 20% of your income for your fun, wants, and desires.

The Wealthy Take Their Grateful Pill Every Morning. Instead of complaining about what isn't working and what has yet to come, try copping an attitude of gratefulness. Being grateful is like a muscle. When you are training yourself to be grateful, you are preparing yourself to both attract and appreciate the greater and the grander.

The Wealthy Have a Crew and Seek to Expand It Strategically. The saying "misery loves company" is only partially true. Wealthy people are about networking, meeting, mentoring, being mentored in order to form meaningful relationships that will result in big dollar bottom lines for all involved.

The Wealthy Live In the Slow Lane. Most wealthy folk are not the stars of our favorite ratchet reality show, athletes, or entertainers. A lot of self-made millionaires are those boring people that worked a side-hustle until it became full-fledged, consistently and faithfully invested their money over several decades, and took deliberate risks. Translation: turn off the T.V. and pick up a book, or speak to a financial advisor.

The Wealthy Don't Believe In Luck. With the exception of lottery winners, the wealthy are never surprised when they check their accounts and see the obscene number of zeros at the bottom of their statements. Whether it be a life committed to frugal living, investing, and/or entrepreneurship, the wealthy knew exactly what they wanted for their wallets and stuck to their vision...through the ups and downs of the economy, through financial obligations to family and through life's uncertainties. They chose to be wealthy and did not stop until it happened.

The Wealthy Marry Well. Earlier this year, I attended an event where Kathryn Finney, managing director of Digital Undivided (DID), a social enterprise which is focused on helping urban entrepreneurs develop their businesses, provided the keynote address. She maintained that her success in the tech field and in entrepreneurship is in part because she married a man that was supportive, highly skilled, and equally ambitious. In other words, the wealthy understand that their spouses, in addition to being lovers and friends, are potential partners, second-eyes, and first-level investors in their ideas.

The Wealthy Finish What They Start. It is always easy to start something. It's harder, however, to finish, especially in the face of defeat and impending failure. The ability to start strong and end stronger through ups and downs is the mark of a financially successful person.

Becoming a self-made millionaire is less daunting than you think. The truth for many of us is that we can become millionaires with hard work, shifts in our thinking, and managing with whom we spend our time.

So, you want wealth? Go out and get it.