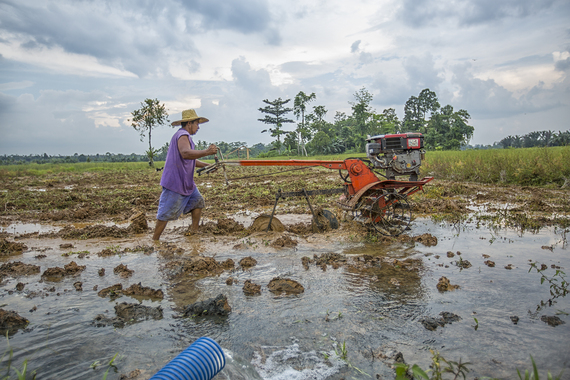 As the new year approaches, the season of hope is tempered by the fact that the global community is facing tremendous humanitarian challenges.

The world is trying to cope with what the U.N. is calling the highest levels of displacement on record, much of it fueled by conflict in Syria and Iraq. Off and on civil war threatens to intensify in South Sudan, which will impact and possibly draw in neighboring countries. Around the world we are seeing blatant disregard for international humanitarian law, with the indiscriminate bombing of hospitals, schools and other civilian targets, chemical warfare, and the use of food as a weapon. And we will continue to witness the effects of climate change, through unpredictable weather patterns, which wreak havoc with the harvests that are the lifeline of the rural poor.

Overall, these climate and conflict-driven crises are triggering simultaneous emergencies that are taxing the efforts of humanitarian agencies. Indeed more than three-quarters of people living in extreme poverty are in countries that are environmentally or politically fragile, or both.

Lutheran World Relief's Early Warning Forecast singles out seven continuing or potential hot spots that may require humanitarian -- and in some cases diplomatic -- action in the next year.

The attempt by the Islamic State to create a caliphate straddling northern Iraq and Syria has resulted in escalating armed conflict and is causing widespread displacement of civilians. In northern Iraq, a military offensive led by the Iraqi security forces has led tens of thousands to flee to safety. In Syria, the fight against the Islamic State is but one dimension of the raging civil war that has led more than 6 MILLION PEOPLE to leave the country, while testing the ability of the humanitarian system to deliver aid within the country. The vast majority of these refugees have resettled in five Middle Eastern countries -- Turkey (which alone is hosting 2.7 million Syrians), Jordan, Iraq, Lebanon and Egypt -- where the influx
is increasingly causing political, economic and social strain.

LWR and other local partners are responding to the needs of families displaced in northern Iraq, providing food, basic relief items and hygiene kits. LWR is supporting members of the ACT Alliance, a coalition of more than 140 churches and faithbased organizations, in providing food and relief supplies, emergency shelter, water and sanitation, and psychosocial support to Syrian refugees in Hungary, Serbia and Greece. In Syria, LWR is working with International Orthodox Christian Charities to offer cash-for-work activities, designed to ease the economic strain on internally displaced Syrians, who have few options to earn income to support their families, by providing them the opportunity to work on community development projects. And in Jordan LWR is working with a local partner to provide training to Syrian women on how to start their own businesses.

The Philippines -- located in the Ring of Fire, a horseshoe-shaped belt in the Pacific Ocean where a large number of earthquakes and volcanic eruptions occur -- is constantly under threat of meteorological and geological disaster. Each year about 20 TYPHOONS hit the country, the most devastating recent event being Typhoon Haiyan, which claimed more than 6,000 lives in November 2013. The U.N. cited effective disaster preparedness, including early warning systems and targeted evacuations, as a factor in reducing casualties in more recent storms. Currently, the country is focusing on preparing for a potentially devastating earthquake of a magnitude up to 8.0 that could hit metro Manila, home to 11.8 million people. A quake of this magnitude could cause as many as 30,000 deaths and would cripple an urban region that accounts for 37 percent of the country's gross domestic product. We are also keeping an eye on the country's political climate, as a new president has shaken up alliances and provoked controversy.

Working within the local barangay municipal structure in Mindanao, LWR has helped establish several Barangay Disaster Risk Reduction and Management Committees. LWR has assisted these committees in identifying potential risks, developing community-based disaster plans, and implementing strategies to minimize community vulnerability to disasters. LWR is continuing with our long-term recovery programs in response to Typhoon Haiyan, as well as the less-destructive Typhoon Hagupit from 2014.

Venezuela is a country on the brink, with major regional implications if it should fail, especially for neighboring Colombia. Venezuela is embroiled in an economic and political crisis that has included food shortages and runaway inflation. The Council on Foreign Relations reports that "basic food and medicine are in severely short supply." There have been large public protests against the Maduro government. In November alone, Venezuela's currency LOST 60 PERCENT of its value on the black market.

According to news reports, merchants have resorted to weighing the piles of cash needed to buy goods to determine their value, as there are too many bills to count individually. The government has announced that in mid-December it will begin circulating higher denomination notes, ranging in value from 500 to
20,000 bolivars.

LWR is working in neighboring Colombia and is committed to supporting sustainable rural development in that nation's countryside that will be key to maintaining peace and stability after five decades of conflict. As Venezuela's economy falters, large-scale migration to neighboring countries becomes an increasing possibility, and northeast Colombia would likely have to absorb much of it. Development and peace in
Colombia could act as a stabilizing factor in the region and an encouragement for Venezuela as it copes with its internal struggles, forestalling major migration in the region.

What We're Watching For: Regional Consequences of the Boko Haram Conflict

Boko Haram, an Islamist militant group that is fighting to overthrow the government of Nigeria and establish an Islamic state, has wreaked havoc through a campaign of violence and kidnapping, and the effects have spilled outside Nigeria's borders. Massive displacement of MORE THAN 2 MILLION PEOPLE has ensued and livelihoods have suffered as Boko Haram has disrupted trade and farming. Due to lack of access and other factors, relief efforts have failed to reach all of those affected, and nearly a quarter of a million children are severely malnourished in northeastern Nigeria.

In addition, nearly 200,000 people have sought shelter in neighboring Cameroon, Chad and Niger. This regional destabilization is happening in the context of prolonged drought affecting these countries in the Sahel, exacerbated by the effects of El Niño, which has triggered a hunger crisis affecting more than 20 million people.

In Niger, LWR has established an office in Zinder, less than 80 miles from the border with Nigeria. The region will likely be affected by the migration of Nigerian refugees, who are currently concentrated in the area just to the east of Zinder. Recognizing that communities that are strong economically are less vulnerable to violent extremists, LWR is working with the rural poor in Niger to improve their cultivation, processing and marketing capacity. LWR uses a climate smart agriculture approach to promote the introduction of environmentally sound practices with improved cultivation methods and crop varieties, such as higher-yield and drought-tolerant millet and legumes. LWR is engaged in similar work in neighboring Burkina Faso and Mali.


What We're Watching For: Political Instability, Response to Refugees

Shifting political dynamics in East Africa are contributing to instability in the region. A resumption of fighting in South Sudan in June 2016 threatened to renew the nascent country's civil war. The fighting led to an influx of South Sudanese fleeing the violence by crossing the border into northern Uganda. Meanwhile, Kenya has grown weary of the presence of more than 260,000 SOMALI REFUGEES, citing repeated attacks by al Shabaab militants, and has announced plans to close the Dadaab refugee camp, asserting that improved conditions in Somalia allow them to return. Human rights groups are accusing the Kenyan government of coercing refugees to return home, despite the continued insecurity in Somalia. Kenya holds elections in August 2017 and refugee issues have played into political debates. In Uganda, deadly clashes between government security forces and a militia loyal to a tribal king in the nation's Rwenzori region have raised tensions.

LWR has worked for many years with our partner, the Lutheran World Federation's Department for World Service, to provide ongoing assistance to refugees in the Dadaab and Kakuma refugee camps in Kenya, serving refugees from Somalia, Sudan, South Sudan and other neighboring countries. In South Sudan, we are providing assistance to Sudanese refugees in camps in two of the hardest hit states that border Sudan: Unity and Upper Nile. Our programs focus on addressing child protection needs, ensuring boys and girls have access to quality basic education and develop life and vocational skills. In late 2016, LWR provided the Uganda Red Cross with $250,000 of material aid for South Sudanese refugees who had recently entered the country. In refugee situations, it is important to take into account the burdens shouldered by the host communities in providing shelter to refugees. In both Kenya and Uganda, LWR works with farmers and farmer cooperatives to promote sustainable, longterm development by improving crop quality and productivity, increasing access to financial services, and facilitating access markets to increase prices and improve incomes.

What We're Watching For: Recovery from Hurricane Matthew

Hurricane Matthew hit Haiti on October 4, 2016, killing hundreds, DESTROYING TENS OF THOUSANDS OF HOMES and ruining life-sustaining crops. It was a tragic setback for a country that was still recovering from the January 2010 earthquake. As the rebuilding commences, the international humanitarian community faces an opportunity to make lasting progress in building resilience and reducing poverty.
Failure to do so will reinforce a tragic pattern in Haiti: when disaster hits, aid pours in, but provides largely unsustainable, short-term relief. In the coming months, cholera will continue to be a threat. The loss of crops and livestock may lead to food shortages or a spike in prices, and a hunger crisis is a looming possibility. People who already lived in abject poverty have been left with little to no food to eat, because their minimal stocks and seed sources were destroyed.

LWR's $1.3 million relief and recovery response after Hurricane Matthew targeted more than 16,500 people in the hardest hit areas and included distributions of community water purification units, as well as hygiene-kits and kits for fashioning temporary shelter. LWR's longer term response will focus on food security in the North West part of Haiti, a part of the country receiving little outside support,
through the distribution of seeds, livestock and fishing equipment, and a cash-for-work program to continue the clearing of roads and irrigation canals.

The people living in Central America's Northern Triangle countries of El Salvador, Honduras and Guatemala have long suffered from grinding poverty, widespread corruption and violent conflict, from the civil wars of the 1980s to the spike in gang violence in recent years. These social ills have acted as push factors, generating periodic waves of migrants fleeing danger and seeking protection and better lives in Costa Rica, Mexico and the U.S. However, U.S. investment in the region, in the form of conditional support for the Central American governments' Alliance for Prosperity plan, along with civil society demands for transparency and accountability, offer an opportunity to address root causes of poverty and insecurity, especially in rural areas.

LWR works to address the root causes of migration and violence, improving livelihoods in communities in Central America so that people do not have to migrate to support their families' economic well-being. LWR partners with local non-governmental organizations (NGOs), farmers´cooperatives, community councils and local governments in Central America to advance rural development, increase food security and protect natural resources. We improve the incomes of coffee and cocoa farmers by linking them to local, regional and international markets. LWR also works to strengthen local communities' capacity to advocate for policies that support improved food security. And we work to diversify crop production for consumption and sale, providing farmers with increased resilience and economic protection.