My wife Nikki always seemed to be a natural at this motherhood thing to me. She often makes it look so easy, the way she balances her full time job, the time spent with the kids, our relationship and her social life. And the way she interacts with the kids always seems so natural. Or so I thought.

A few weeks back she told me that one of her mantras as a mom was "you fake it till you make it." A mantra she apparently repeated often. Intrigued by her comment and knowing that every mom experiences motherhood differently, we wanted to know if more moms felt like that. Was it a normal part of motherhood to "Fake it till you make it," or was this something specific to Nikki?

So we asked the moms of our online community www.wemothers.com* to shed some light on the issue. And over 70 percent of them told us that they too occasionally fake it by pretending they know what they're doing when in reality they have no clue!

As one mom put it: "Until you experience motherhood first hand you have no idea how to balance caring for a child, yourself and maintaining a household. Until you figure out what works for your family you pretty much are just guessing and hoping something will stick."

Another offered: "Children do not come with a manual and every child is different -- so you do what you have to get through everyday." And a third one commented: "As a mom you never know if you are doing things right, so you often have to just pretend you do and go with it."

And apparently, moms don't lack examples of when they do it. Below are some of the stories they shared with us:

"I pretty much felt like I was faking knowing how to handle things from the first moment my twins came home from the hospital. I remember their first bath at home I tried to put on a brave face but inside I was terrified. One ended up pooping in the water several times, spraying me in the face with pee, and we both ended up wetter and dirtier afterwards then we did at the beginning. Somehow though we eventually got the hang of it and made it through."

"My child became ill and had to be placed in a home with other children like her. There was a lot of therapy and visits and back and forth. Even though I was really just falling apart inside, I had to be strong for her as to support her in her recovery process."

"We have just moved to a new area and trying to look at a few houses. My son who had just had two pottybreaks swore he didn't have to go to the bathroom and then proceeded to poop everywhere in one of the houses we were looking at. I almost broke down and started crying. However I did not cry, I cleaned up the poop and all is well. Just goes to show you that these things pass and ended up being funny stories."

"I hit postpartum depression 4 months after her birth. I faked/hid my problem to the point that I was miserable. I needed help and sleep, lots of it. This friend confided in me that she too had experienced depression. I realized I wasn't alone and could share with her my experience and we could help each other through our trials."

"My son decided he wanted to find a new family. I told him we'd go look after school or that I would check with his teachers at school to see if they new anyone wanting a little boy to take home with them. He said, 'Good!' I then proceeded to let him know that I'd have to be honest and tell them what kind of behavior has been occurring at home and that he hit his sister because she was in his way. 'Fine', was his answer. We got to school and I didn't even get to finish the sentence before his arms were around me apologizing for the mean things he said and that he loved me and didn't want a new family."

"You fake patience to keep situations under control. Struggling to get two small children dressed, in/out of their car seats, and in/out of the grocery store while trying to maintain your sanity."

Based on those stories, it appears that "faking it" is just a normal part of motherhood, a way to make it through the day, a way to keep composure, until you figure it out and get the hang of it.

So moms (and dads), next time you feel stressed-out or guilty, or feel like it's too much and you don't know how you'll make it through the day or just through the moment, fake it. No really fake it. Just fake it. Most other moms do to.

As Nikki says, "Knowing that other moms go through the same struggles doesn't make my day easier, but it makes me feel better about myself knowing that I am not alone and if I just keep moving forward I can make it." (Oh, and in case you were wondering, dads fake it even more till they make it too. Trust us, we know it firsthand, but we also know that we are not that good at it).

How about you? Is "faking it 'til you make it" also one of your mantras? Take our little survey at the bottom of the post. 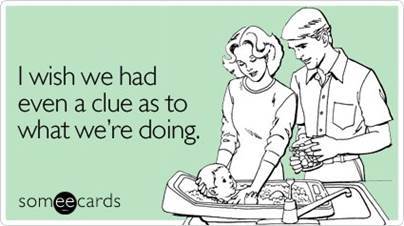 www.WeMothers.com is an online community dedicated to moms' emotional well-being. One of the few places where moms don't have to "fake it". To read the story behind www.WeMothers.com on HuffPost click here.