We need to drink more milk. Eat less sugar. Get more sleep. Spend less time on our devices. Exercise more. And drink less alcohol, unless it's red wine, in which case 1.5 glasses per evening with a well-balanced dinner is good for you.

I don't mind being inundated with recommendations from doctors or even self-proclaimed "experts" telling me how to stay a healthy adult. What I do mind, however, is being boldly told what I should and shouldn't do with my children.

Before you go having a temper tantrum, I fully recognize the hypocrisy I described. I just don't care.

My concern is that we've become such a hypersensitive and hypercritical society that we almost get off on telling others what they should and should not do. I live in Los Angeles where seemingly anyone with a heartbeat can add "expert" or "of the stars" to their name just because they want to. I've learned to take every bit advice with a grain of salt.

So, here are seven of the most popular parenting rules that I refuse to follow.

Experts believe that using exclamations like "awesome job" and "good work" too frequently can lead to a child feeling as though they've let you down when they aren't, well... awesome. Others suggest that such phrases can lead to a child performing well only to receive praise.

I believe if my daughter does so well that I am truly compelled to tell her she's done an awesome job, she deserves to hear it. This goes for anything from coloring within the lines to scoring a 1600 on the SATs (which I pray are as irrelevant as Vanilla Ice is now by the time she is old enough to take them). Squashing or suppressing my own excitement about the feat may lead to her doing the same, potentially causing way more harm.

I've vacillated back and forth on this one, but often find myself telling each of my daughters she is my best friend. And I mean it. Is she the best friend I call hysterically crying after a vicious argument with my spouse? No. And she certainly isn't the one with whom I want to share all my deepest, darkest secrets. But I do want to be that friend to her.

I want her to know that she can tell me anything at anytime. I want her to know I will support her, guide her, believe in her and love her no matter what. I want to be there for her during the most difficult and most joyful moments of her life, whether or not she is there for mine. To me, that's what being a best friend is all about.

Our pediatrician didn't want my children to see a frame of television before they were two years old and no more than 20 minutes a day for some time after that. For me this was as difficult to accomplish as standing atop the Empire State Building while balancing a couch on one hand and a grand piano on the other. Never going to happen.

The American Academy of Pediatrics reports that children watch an average of 6 hours and 32 minutes of television daily, which I agree is complete blasphemy. But somewhere between 20 and 392 minutes, there is a middle-ground. And in some homes watching an excess of television is significantly safer and healthier than a more dangerous alternative.

At only 7 years old, my daughter begged me to bring her to a museum exhibit dedicated to the fall of Pompeii. When we finally saw the gallery, clearly intended for adults, she listened to the headphone guided tour more intently than she has ever listened to me. When I asked what first intrigued her about Pompeii, she said it was an episode of The Magic School Bus.

I've come to accept that the right programming can open corridors in my daughter's brain that I'd never have thought to travel with her.

4) Don't let your child know if you are on a diet.

I get it. As a woman who has struggled with body image issues, I want very much to teach my daughters to rock incredible self-esteem while confidently living healthy and fulfilling lives. Part of that lesson, without a doubt, is about assuming responsibility for your own body.

My kids eat McDonald's, love cherry Slurpees and can kill a sleeve of Oreos faster than you can read this article. I don't prohibit nor do I even frown upon letting them eat (almost) whatever they want, as long as some kind of balance is struck. That said, I want to be honest about how such habits can impact their bodies in the long term. So if we go on vacation and I indulge with reckless abandon, I don't mind them knowing that I have to deal with those consequences.

How can letting my daughters see me commit to eating healthier meals, drinking more water and exercising more routinely for a few weeks in the hope of achieving a healthy goal be a bad thing?

Experts believe repeatedly telling a child to "hurry up" raises their stress level and flusters them (potentially creating further delays) while "let's hurry" sends the message that you and your child are on the same team.

Here's the deal. My daughter and I are on vastly different teams. I am the Yankees to her Red Sox. We may be in the same league, but she will do whatever she needs to win one over on me and I will do the same to her.

Getting out the door on time isn't about bonding. It is about time management and responsibility, two things I hardly expect her to have mastered before the second grade. In fact, I've hardly mastered those things myself. So I let getting to places in a timely fashion be all about the task at hand and save the team playing for when it matters most.

Using financial rewards for my 7.5 year old has proven incredibly beneficial. She receives a whopping two dollars for a perfect spelling test or one dollar if she gets only one word wrong. She also receives one dollar if she is awarded "Student of the Day" in her karate class.

Is her motivation for studying more about earning a buck toward an expensive Lego set than it is about furthering her education? Absolutely. But she masters her spelling words and gains a lot more from her karate class than she would otherwise.

Experts say kissing a child on the lips can "confuse" them. I firmly believe that any child who grows up in a sexually healthy home understands the difference between a kiss from a lover and a kiss from a loved one. Of course if my daughter ever seems "confused," startled or embarrassed by my quick peck on her lips, I'll stop. But until then, we both pucker up!

While I assume you'll go nit-picking over these opinions for something to complain about (because that's what we do these days) keep in mind that there are exceptions to every rule. I don't support crash diets nor would I let my child diet unless it were medically necessary. I don't allow television marathons and I don't chat with my daughter like I would an old friend while consuming exactly 1.5 glasses of red wine over a healthy dinner.

I do, however, live by my own set of rules (or at least one mutually agreed upon between myself and my husband) and think you should do the same. But, I promise not to make that a rule. 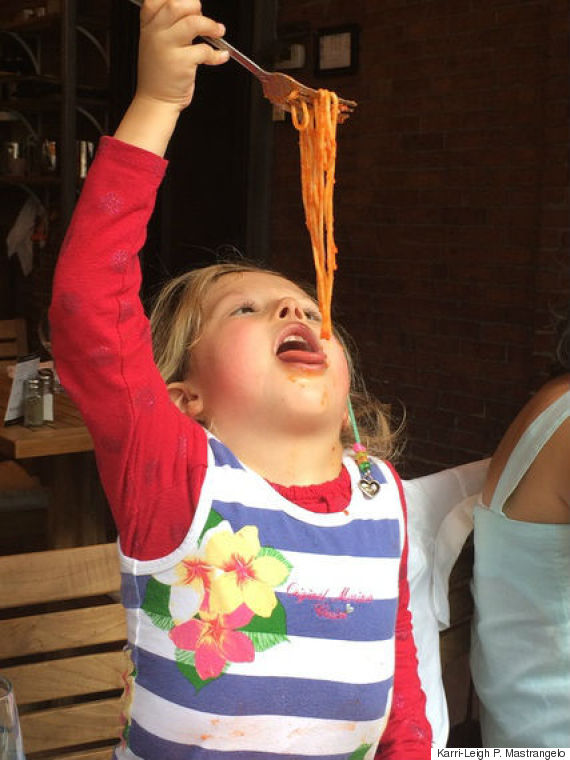