Here's one for the "What is the world coming to?" files. 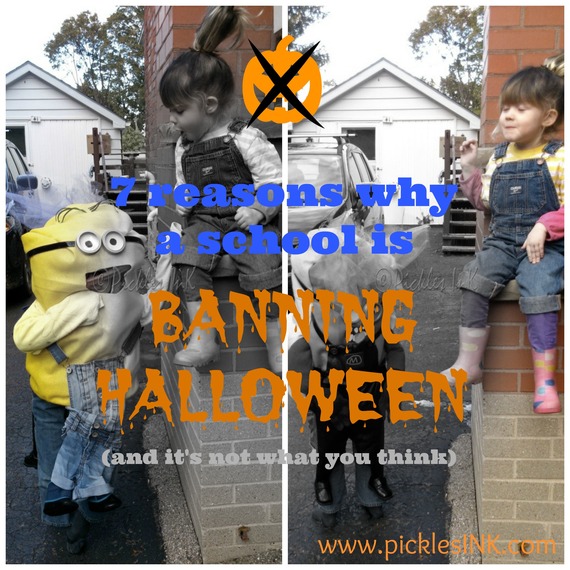 This gem scrolled through my Facebook feed yesterday: A friend's children's school has decided to forgo Halloween this year in favor of... I don't know... Friday, I guess. The decision was attributed to the "staff" and the reasons behind it were given as follows:

The [school] staff have agreed no Halloween dress up based on these grounds.

1. Due to increase in supervision duties, teachers do not have the time to dress or apply make up for up to 30 students in their classrooms.

2. Increase in the need to monitor and address appropriate dress and socially acceptable costumes.

3. Costumes are hot and uncomfortable causing irritation and often crying.

4. Too many upset students when costumes become torn, lost or parts forgotten at school.

5. Many costumes are dangerous on the playground and impedes moving comfortably and or are not conducive to the learning environment.

6. Costumes and parading increases apprehension in an increasing number of students who are presently experiencing anxiety issues -- which can result in crying, worrying and withdrawn type of behaviors.

7. We also have an increase in number of students who cannot be photographed whom we have an obligation to protect so this can be difficult to monitor.

The friend who posted this was justifiably incensed -- there had been no discussion with parents beforehand, which, since the vast majority of these issues could have been easily dealt with by parents, could have prevented this from being an issue in the first place. In her post she commented on each of the reasons given with simple solutions:

Solution to #1: Ask parents to make sure costume is easy and requires no make up.

Solution #2: Parents know better then to send an inappropriate costume to school.

Solution to #3: Make sure costume is indoor friendly.

Solution #4: Tell parents send at your own risk, the school will not be held responsible for that. Also kids should know better respect other peoples property.

Solution to #5: Why would a parent let their child wear something dangerous, that's just stupid.

Solution to #6: Create a quiet environment with appropriate activities for these students, whilst the other students go about on the parade. Not a hard solution. I understand anxiety is a tough one but these children cannot be sheltered for society their entire lives and our kids shouldn't have to suffer because of it. No one should it's a win win, kid get their parade and the quiet kids get their own comfortable environment.

Solution to #7: Not that difficult actually. NO PICTURES PLEASE; we are all grown up we know how to follow rules.

As these things inevitably do, the discussion quickly devolved into the usual "they" can't force "us" to give up "our" cultural traditions/why-come-to-our-country-if-you-don't-want-to-follow-our-traditions (I'm pretty sure that's what the Native Americans said)/this-is-just-political-correctness gone-mad rhetoric...

Ah yes..."Nobody take offense or anything, but I'm just going to blame religion for a decision that didn't actually involve religion. But seriously, don't be offended, y'all, cause I said I didn't mean it *that* way."

"So I'm just going to go ahead and play Devil's Advocate and say that I agree with the school's decision for reasons that the school didn't actually cite for making that decision."

The old, "If *you people* don't like *our* cherished traditions, why don't you just a) Not send your kids to the schools which they have a fundamental, documented right to attend; or b) Go back to where you came from," which collectively garnered 12 likes in about 20 minutes. Sigh.

And finally -- asserting our right to our time-honored traditions: "I hate to say it but... oh, who am I kidding? I say it whenever I get a chance. Sometimes I just yell it out randomly at people on the street! We're so concerned about offending people with out institutionalized racism and Judeochristiancentric statutory holidays that we are letting our cherished traditions like celebrating the Gaelic feis of Samhain, marking the end of the harvest and the turn of the seasons to wintertide, with the pagan traditions of mumming and guising and rest assured WE WON'T GIVE UP OUR CULTURAL APPROPRIATION WITHOUT A FIGHT."

...notwithstanding the fact that not one of the school's reasons cited religious/cultural accommodation as a factor in the decision, so let's just leave that train in the station or better yet send it to the scrapyard, mmmkay?

Blocking out that portion of the discussion as completely irrelevant, the rest of the discussion was very balanced. Suggestions of "laziness" on the part of teachers were quickly shut down by other posters pointing out the challenges teachers face with increasing class sizes and curriculum requirements.

Other posters made some very astute observations about the effects of banning costumes and the benefits of school-sanctioned Halloween fun.

The majority of the conversation centered around the issue of parents/caregivers not being given a chance to try to problem-solve these issues, which most agree could have been done easily. The decision came as a complete shock to the parents, who had never been asked if they would be able to volunteer to help or to ensure that their children could deal with their costumes themselves. One poster asked if parents hadn't followed instructions in the past, and I don't know the answer to that.

Many offered creative solutions to the problem:

My take on it was:

Heck, half the time Molly wears princess dresses to school. I'm normally at the head of the inclusivity parade but this is ridiculous. None of the reasons mentioned in the original post had anything to with religion, for one, so that's not even under discussion.

If they don't want to organize a halloween parade, that's one thing. Forbidding "dress-up?" How do you even define that? "Oh, little Jimmy, that sure looks like a scarecrow costume to me. Go to the office!" "But Mrs. So-and-so, I just felt like wearing my overalls today!" The standard rules for "appropriate dress" that (I assume) everyone is familiar with would apply just like any other day (a subject in and of itself that I have covered in detail on my blog, so I won't bore you with it here!). Teaches don't have the time to apply facepaint? So...uh...how about "Parents, please be aware that teachers will not be able to apply facepaint and plan accordingly."

Summary: I would send my kids in costume anyway and raise holy hell if the school tried to make something of it. It's possible I'm *that* parent.

and I suggested a sample letter that could have been sent out to parents.

Students are invited to come to school in costume or dressed in orange and black on October 31.

A few things to consider:

*Costumes must comply with our standards of appropriate dress.
*To avoid frightening our younger students, please avoid facepaint or masks.
*For younger students, it's a good idea to give costumes a "test run" at home to make sure that your child can get in and out of them by themselves as staff may not be available to help them.
*You may wish to send a change of clothes for your child.

I also sought an expert opinion on the topic, posing the question to Ben:

"Hey Magoo, there's a school in town that has decided not to let kids wear costumes on Halloween."

"Well, they said that the teachers don't have time to help all the kids in their classes put on make up and costumes."

"Oh, okay. Wait, I don't really get that. Why wouldn't they just put on their costumes at home?"

"They were also worried that it might be hard to make sure the costumes were all appropriate for school and for learning."

"Why would a costume not be appropriate? What does that even mean? Oh, wait -- there was that time when I wore my knight costume -- you know, when I was still at Molly's school -- and I had my sword and shield but we weren't allowed to have weapons at school so I put them in my cubby. So I guess if kids brought something they weren't supposed to they could put it in their locker. I don't know, mommy. I still don't really get it. I think they should be allowed to wear costumes."