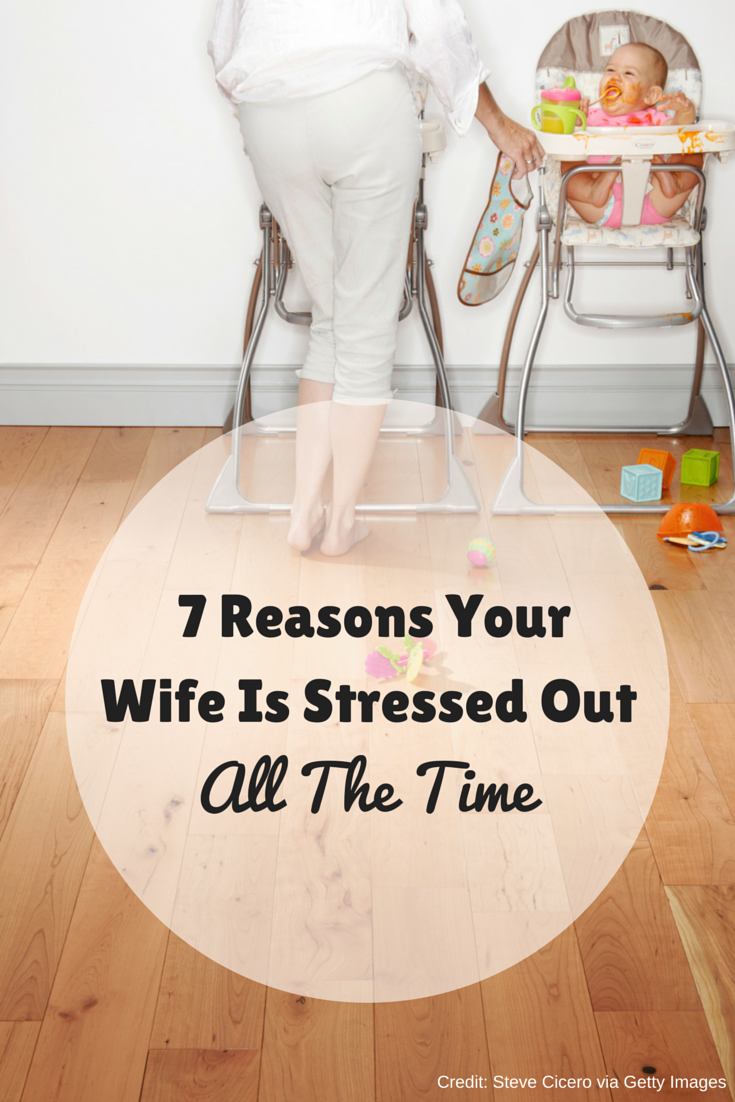 Many men come into my office complaining about their wife acting so stressed out all the time. And sometimes the words they use are not that nice. Basically, many husbands want to know: "My wife and I both work, but when I get home, it's not like a fire drill for me. For her, though, it's like the end of the world if we don't stay on schedule, if the dishes are in the sink, if we eat late or the kids are playing for a few minutes instead of brushing their teeth. What's her problem? If she wasn't so stressed out, our home life would be so much more relaxed."

I completely understand this perspective. It isn't hard to empathize with the guy who just wants to slow down and smell the roses, especially because most moms I know beat themselves up for not being more present-focused, mindful, and calm with the kids. But if telling your wife to "calm down" worked, I would be out of business as a therapist. (Note: Did saying "calm down" even work one time in your entire marriage? Told you.)

Anyway, here is a list of seven reasons that your wife finds it difficult to "calm down" on a regular basis.

1. Women are judged differently than men are.

If your kid is wearing mismatched clothes and has pen on his face, and you bring him to school, everyone is like, "Awww! Dad did such a good job!" This is something that involved dads actually find kind of insulting. But if a mom brings a kid into school looking a mess, the teachers, the other parents, and anyone else within a mile radius is thinking, "Hmm, is she a closet alcoholic or something? Poor kid."

It's all well and good to say, "I don't care what people think about me!" when you're flashing your boobs at Mardi Gras at age 22. It's actually fine to say that as long as you're not a parent. But here is the thing: children deserve not to start out with the deck stacked against them because they don't fit in, they are always late, their lunch is a crappy lunch that the other kids look at with disgust, they wear unwashed clothes, and so forth. As I frequently mention, we are evolutionarily designed to be group mammals. Mammals need to fit in or they get ostracized and left for dead. Anyone who has been through junior high knows this is not just applicable to meerkats. So, as independent and creative as you hope that little Madison is, your wife knows that if she shows up to preschool after show and tell already happened with a Dunkin Donut for lunch and knots in her hair, the other kids are not going to want a playdate with her. There is a lot of stuff that has to happen behind the scenes for your kid to reach the baseline level of fitting in that will give him or her the confidence needed to one day decide that fitting in isn't important. (If you don't fit in as a kid, you're going to be consumed with fitting in as a grownup. If you fit in just fine, then you have the confidence to think outside the box.) And your wife is probably in charge of everything that helps your kid look, act, and feel relatively normative, which is stressful.

You can be like, "Oh, my mom doesn't care if we're 15 minutes late to lunch!" And your wife, since she is more sensitive and perceptive to the nuances of your mother's nasty faces -- I mean, expressions -- will be like, "Get the hell in the car now so I don't have to deal with a guilt trip for the next five months." And you know who's right? Your wife. Unless you want to have the discussion with your mom about her guilt trips. I didn't think so.

I love this finding. And women are also most often the ones who are up with the kids in the middle of the night. So your wife has a sleep deficit, so she's more easily stressed out. If you want a less stressed wife, get up with the kids.

This is related to points #1 and #2: Women are judged differently, and judgment matters. So your wife knows that if she hosts a playdate and the house looks like a disaster, with obvious dirt and grime, the other mothers are going to be grossed out. Before you say how people shouldn't care about visiting a dirty house, just pause for a second. In life, there are proxy variables. So, if you, who used to be a pretty good looking, virile guy before shackling yourself to a wife and kids, went on a date with a woman who was really fun, spontaneous, fit, and loved dancing and having fun, what did you take those proxy variables to mean? Probably that she would also be a good time in bed. We all use proxy variables. In society, there is a baseline expectation that your home does not look like an alley in Calcutta when you entertain guests. Keeping a fairly normal looking home is a proxy variable for "understands how society works." So if your wife wants her house to be clean before having people over, or just as a default in case people come over, this is basically saying, "I want others to view our family as a reasonable group of humans who fit into society and with whom it may be plausible to have a friendship, not as a visiting band of Martians with no working knowledge of this planet and its social mores." This seems like a logical desire to me.

6. Your wife wants to feel heard.

Your wife wants you to empathize, understand and validate her anxiety or stress. So, she starts out just a bit stressed, and when you minimize her feelings, she gets more and more openly and obviously stressed or anxious in order to convey to you HOW UPSET SHE IS, which she then hopes will result in you finally understanding the importance of the situation and responding with empathy, concern, and love. Of course, you're on the other end of this, trying to act calmer and calmer, and minimize the issues more and more, so that she realizes how small of a deal this stuff is. You're at cross purposes, which in psychology, we call being "polarized," and each of you ends up acting more extreme than you really feel, with her as a caricature of a neurotic shrew, and you as some laid back James Dean or something, like so:

You: It's not that big a deal.

Wife: Yes, it is. We're still going to have to park and stuff too.

You: Parking is no problem.

Wife: STREET PARKING IS A PROBLEM! THEN WE HAVE TO PACK UP THE STROLLERS! WE ARE GOING TO BE SO LATE!

You: Street parking is easy. I can load the strollers in a couple seconds. We don't even need strollers, really.

Wife: WHAT THE HELL ARE YOU TALKING ABOUT???? WE HAVE TO LEAVE RIGHT THIS SECOND!!! WHY AM I ALWAYS THE ONLY ONE WHO KNOWS WHAT WE NEED TO DO????

You: Can you just chill out?

Wife: (Sleeps with your best friend in her mind).


Instead of this horrible dynamic, try to meet your wife where she is in her anxiety and stress. And, like a magic trick, she will actually get less stressed! I am not kidding. It will likely go like this:

You: HOLY CRAP, look at the time! We are still going to have to unload the kids and pack up the strollers too! I should have started putting the kids in the car like 10 minutes ago! This sucks.

You: I hate when we're all stressed because we're late!

You: (Astounded and my latest convert to the benefit of joining your wife in her emotions) Okay.

7. Your wife is Type A, and that's partly why you married her.

Save me your story about how she used to flash you in the Victoria's Secret dressing room when you dated her so you thought she was spontaneity incarnate. There were plenty of indicators that she was extremely organized, like perhaps at her job, or that she was always throwing someone a perfectly planned birthday party, or that she tries her best at everything she does (like flashing you in the Victoria's Secret dressing room, or purchasing lingerie in the first place). And part of you liked this attention to detail, and to YOU.

Men who marry women who they later complain are too rigid and perfectionistic usually come from childhoods where nobody really had a laser-like focus on anything, especially not them. At the beginning, and at many points throughout the marriage, your wife's focus and detail-oriented nature makes you feel loved and confident that the kids, the house, and your lives in general are under control. So, you take the good with the bad. The same woman who wants to be five minutes early for everything is going to plan you an awesome surprise 40th birthday party and take care of you excellently when you're sick, and your kids are never going to be the last ones picked up from practice or the ones whose mom forgot the field trip money.

So, send this article to your spouse and use it to open up a conversation. Which of these reasons most resonate? How can you both work together to alleviate some of your wife's stress? How can she communicate what she needs, and how can you respond with acceptance, love and empathy? That's your homework for today, virtual clients. And till we meet again, I remain, The Blogapist Who Really Hates Being Late.

Dr. Rodman writes at Dr. Psych Mom, and would love you to join her on Facebook and Twitter@DrPsychMom.