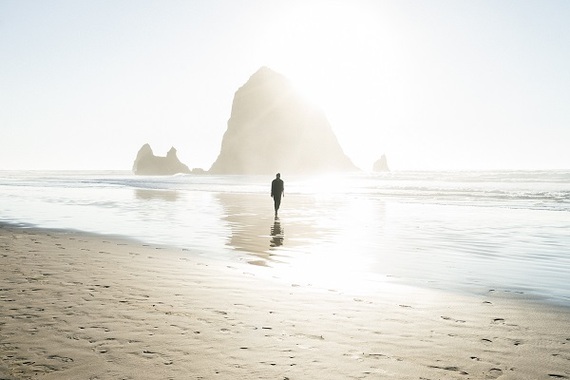 You truly, deeply, and scientifically matter to the world.

"Zach, thanks for changing my life," were the six powerful words that started the e-mail message that taught me this most important life lesson.

As a college student, I spent my summers working the university's orientation programs. I had no idea why until I read that e-mail. I replied to the stranger and said that she had the wrong Zach. She e-mailed me back immediately saying she remembered my last name engraved on the gold, magnetic name-tag. She said it resembled the Shakespearean character Mercutio. She told me she met me in July, 2004 at her orientation program. There clearly weren't too many other options. It had to be me.

It turns out she was a new student that summer and was so miserable that she had made up her mind that she wasn't going to stay in college. She didn't connect with anyone and was majoring in something she felt no passion for.

She told me that I noticed her sitting by herself and simply said, "Hi, how's it going?" She proceeded to tell me how awful her experience was. She told me she wanted to be a writer and not an economics major. Just doing my job, I pointed out where the journalism department was. That's it. Nothing special.

Five years after that encounter she was an assistant editor at a major magazine in New York City and had just gotten engaged to be married. After she talked to some faculty in the journalism department that day in 2004, she ended up switching her major to journalism and never looked back. Ever since that moment she attributes graduating from college, every person she's met (including her future husband), the workplace she spends almost 70% of her week at, and her current reality to one guy in a purple shirt who veered off the concrete path and said, "Hi."

I look back now and wish in that college job's training, I was told, "Your job is to potentially change the trajectory of a human being's life today." You better believe my alarm clock would have looked a lot differently.

Funny enough, that is the only e-mail like that I've ever received. But that one small personal story is a huge reminder for me every day of the real impact we have on people (and by default, the world) in each moment, no matter what we do or who we are.

You Can't Not Matter

The most profound change in the world is accomplished in the tiniest of moments between human beings. Drew Dudley, in a TED Talk on everyday leadership said, "There is no world, there are just billions understandings of it. And if you change just one, you change the whole thing."

Once you start believing in your capacity to change the world in a conversation, in a glance, in a smile, and in a moment you start awakening your purpose.

You simply can't not matter. Scientifically, here's why.

Many people tell me, "...but I don't have a platform, I don't have an audience." Yes you do. Columbia University statistician Tian Zheng developed an algorithm and found that you, yes you, know about 600 people. And guess what? Each of the 600 people you know also know 600 people. So, you have a captive audience in your life of about 360,000 other human beings. And those people are just in your 2nd degree of separation.

Have an idea? Have a message to share? Start with the person sitting next to you.

And those are just the people you know. Research has also found that you'll end up, over the course of your lifetime, meeting about 80,000 people. These encounters occur in line for coffee, walking down the street, at a client meeting, or out to dinner. Every single day, the average person meets about 3 new people. Today, you can alter someone's life forever, just by saying hi to them.

Still not buying it? Just by showing up, you can completely change the brain composition of another human. Neuroscientist Rodrigo Quian Quiroga pioneered brain imaging research that pinpointed the activity of single neural pathways in the human brain. In one of Quiroga's studies, he found that when a person sees a new face, a new neural pathway is created. When that person sees that same face again, that unique, specific new neural pathway in the brain fires.

Missed that networking event? Late for that meeting? You robbed people of new neural pathways forever.

Smiling is one of the most powerful ways to transform a person's mental state. So powerful that French neurologists have found that one smile generates the same level of brain activity as if you were to give someone $25,000 in cash or 40 bars of high quality dark chocolates.

Feeling unproductive today? Try going and smiling at someone. You'll feel like Oprah.

It doesn't matter where you are or what you are doing, you know or experience something that others don't. You have something to teach. Many people say its important to learn something new every day. I think it's more powerful to teach someone something new everyday. By teaching, you start giving and giving to others has been linked to increased happiness and success.

And finally, as I learned in that e-mail, simply saying "hi" can dramatically change the trajectory of another human's life. If you can say "hi" then you can change someone's world forever. And you don't need a degree for that.

Whether you're a teacher, college student, janitor, doctor, salesperson, rich, or poor... you truly matter.

Believing that can change everything.

This story originally appeared on PurposeSpeaks.com